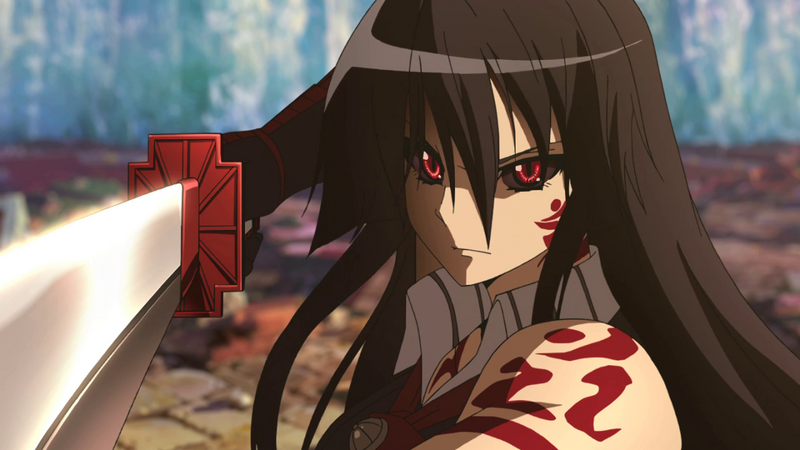 Anime occasionally gives off the impression that it’s less than kind in the way it represents its female characters. With busty babes, giggling gaggles of schoolgirls, and an abundance of ever-so-short skirts and skimpy outfits, many outsiders may unfairly judge the genre. However, those are just a small sub-section of anime — there are so many more shows and movies that feature powerful, smart, and badass ladies. So, here are 10 female anime characters who kick ass and take names.

Quote: “Everything is ‘terrible’? Don’t make me laugh. So what about me? For me, it’s been terrible since I was born.”

Most badass moment: In the first season of Tokyo Ghoul, Touka shows the power of her ukaku wing kagune when she protects the still-naive Kaneki from the persistent Shuu Tsukiyama. It’s the first time Kaneki sees Touka’s kagune in action and she shows just how formidable a fighter she really is to face off against the much stronger Tsukiyama.

Name: Revy aka Rebecca Lee, and commonly referred to as “Two Hands”

Quote: “I can show you what color your brain is.”

Powers: Skilled with firearms and other weapons, able to dodge bullets, ambidextrous.

Most badass moment: The foul-mouthed, hard-drinking ambidextrous gun-slinger, Revy, doesn’t take s**t from anyone. From Black Lagoon‘s first episode when she “Two-Hand”-edly takes on a gang of mobsters shooting up a bar or when she mows down boatloads of enemies or when just shoots a mansplaining neo-Nazi at point-blank because he’s boring her, every scene Revy is in is her most badass moment.

Most badass moment: In Fate/Zero, Saber summons the light of all past, present, and future warriors to form the extremely powerful Excalibur sword and uses it against the vicious and sadistic, Caster. The sword’s immense power burst moves earth and sea, releasing Caster from this earthly plane.

Name: Akame aka Akame of the Demon Sword Murasame

Quote: “It’s because I loved her the most that I wanted to kill her as swiftly as possible.”

Most badass moment: In Episode 4 of Akame ga Kill!, Akame faces off against notorious serial killer Zanku the Beheader. The former executioner from one of the Empire’s prisons uses an illusion to make Akame think that her younger sister, Kurome, is standing before her. Zanku thinks this will deter the assassin and make her an easy target, but Akame doesn’t falter for even a moment. She goes in with full force, first destroying his weapon, and then slitting the Beheader’s throat.

Motoko Kusanagi — Ghost in the Shell

Quote: “Maybe someday your ‘maker’ will come, haul you away, take you apart, and announce the recall of a defective product. What if all that’s left of the ‘real you’ is just a couple of lonely brain cells, huh?”

Most badass moment: Having Motoko on this list begs the same fundamental question that the Ghost in the Shell anime asks: is Motoko human or is she machine? If we agree that there’s some part of her that’s human, then yes, she deserves to be here. And she is one kick-ass lady.

Among her many other badass exploits, Major uses her wits and unfaltering poker face against ace sniper Saito in a one-on-one gunfight. While Saito overthinks the problem, Motoko is already several steps ahead, proving her badassery like a powerful chess master.

Quote: “If the pride of a senshi means hurting each other, I don’t want it. Nothing will come out of fighting. Fighting isn’t the only way to solve things.”

Most badass moment: Sailor Moon may not have the swords and guns of other women on this list, but her influence on anime and the way women were represented is the reason any of the others are here at all.

When the evil Queen Metaria wrecks her home planet, Sailor Moon must find the strength to defeat her alone. Once she learns to believe in herself, she draws upon the power of her loved ones — and the moon — to unlock the Legendary Silver Crystal‘s full power. Not only does she blast away the evil queen, she also heals the entire planet.

Quote: “My specialty is slicing off meat. If necessary, I can display that talent at any time. So if there’s anyone here who’d like to experience it firsthand, please, step right up.”

Most badass moment: One of Mikasa’s earlier moments showing just how badass she is comes in Episode 6 of Attack on Titan‘s first season. Not only does she prove herself as a highly proficient fighter in killing an abnormal Titan running at a crowd at the base of the Wall Rose, she also threatens to execute a merchant selfishly blocking the tunnel for the people’s evacuation.

Quote: “You still wanna fight? Bring it on! Have a taste of my power!”

Most badass moment: As the Potara fusion of Kale and Caulifla, Kefla is one powerful woman. Combining Kale’s unlimited energy with Caulifla crazy strong abilities, Kefla can easily go toe-to-toe with Goku, meeting him punch-for-punch. It takes Goku reaching Ultra Instinct for him to defeat the combined Saiyans, which is super badass.

Quote: “People become stronger because they have things they cannot forget. That’s what you call growth.”

Most badass moment: A female anime character doesn’t always need to be a fighter to be badass. Yes, Tsunade is blunt and has a short temper, but as Hokage, she’s committed to protecting her village. So when Pain comes looking for Naruto in Konohagakure, Tsunade transfers all her chakra power to Katsuyu, a giant slug and Tsunade’s personal summon, to heal and protect the injured and save the village from total destruction.

Quote: “If you do this, we just might win. But there’s no time to hesitate, so do it now! You wanna be a hero, don’t you?! Then let’s pass this test.”

Powers: Swordsmanship, and an earphone jack that can produce destructive vibrations, powerful sound waves, sound canceling effect, and can be used as a long-range whip.

Most badass moment: Although Kyoka hasn’t been featured a lot in the My Hero Academia anime series yet (maybe in Season 3?) she has a badass presence in the manga. The no-nonsense bass guitar-playing punk rocker uses her ears/earphone jacks as a long-range whip and can make sound waves that produce ear-shattering vibrations or they can cancel out noise. That’s pretty damn badass.