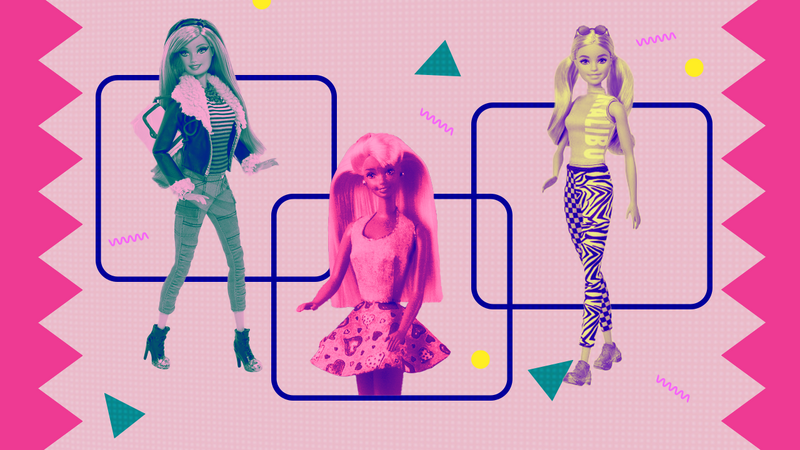 Who’s the best-dressed doll around? The popular answer may have fluctuated a bit over the years, but we all know the real answer has to be Barbie. The classic blonde knows a thing or two about looking sharp, and though she’s been everything from a video game developer to an astronaut, there’s one category she’s still absolutely untouchable in: fashion.

In the late ’90s, the world of children’s edutainment software was a bit of a wild frontier. Young girls, for example, had seemingly more options when it came to trying new and exciting games back then than they do today, especially when it came to titles with peripherals and other fun accessories. Barbie, our aforementioned fashion diva, led the charge.

Along with interactive genie bottle adventures and stick-on nail designers, Barbie cornered the market with some of the most ingenious contributions to the kids’ software game at the time. Her claim to fame? Mattel Media and Digital Domain’s 1996 PC game, Barbie Fashion Designer.

Barbie Fashion Designer didn’t just present a few options to children so they could outfit their Barbies and play house. During a time when the concept of welcoming young women and girl gamers into the tech world felt foreign, Barbie Fashion Designer was a forward-thinking force of nature that was truly ahead of its time.

In fact, it was the first commercially successful video game made specifically for girls, leading the charge to inspire other developers to take a chance and work toward bringing other games aimed at the female player base to the market. Now, 25 years later, it stands as a monument to what can happen when legitimate attention and care is paid to trying to involve women in an often-uninviting industry.

This One’s For the Girls

Barbie Fashion Designer wasn’t some sort of subscription service or one-off event that eager fans could sign up for. It wasn’t an unattainable luxury product that children couldn’t get their hands on. In fact, it was a readily available, ubiquitous software release that combined things children already loved: Barbie and fashion. Created as a way to marry many young girls’ love for the two (admittedly stereotypical) hobbies, Barbie Fashion Designer was a new way for kids to get in on the computer gaming craze that had been sweeping the world in the late ’90s. Specifically, it was one of the only games targeted toward girls, and that became one of its greatest selling points.

During the late ’90s, gaming at large was about the golden age of shooters. Computers were still seen primarily as word-processing and business machines, as well as first-person war machines—two very different extremes. And while there were plenty of reasons for kids to jump on the computer to enjoy themselves, there were few female-facing games for young girls to really jump into.

Barbie Fashion Designer filled a niche which may not have been evident at the time. Though its contemporary critics may have found it unnecessary in terms of supporting “traditional” gender roles, its sales performance told a different tale. It ended up selling over 500,000 copies in just two months following its release, and over 600,000 in the first year it was on the market. It managed to outsell heavy-hitters like Doom and Quake, two of the most popular shooters of all time, during its time on store shelves.

In addition to breaking sales records during its first modest run on store shelves, the game even managed to become a top seller for Christmas the next year in 1997. It makes sense that it would make such a splash with younger female players, but even more so that it was popular as it was easily available on toy store shelves.

Though it seemed like an inevitability that a product facing a niche market with nearly untapped potential would be at least something of a success, that’s hardly the only reason why Barbie Fashion Designer ended up doing so well for itself. The other reasons? It was way too fun to pass up. If you’ve ever made your own paper doll or longed for a custom outfit for your favorite toys, the game would certainly speak to that creative instinct in you.

Creating your own clothing was, by and large, the simple part. Mattel ensured the interface was as simple as possible. The multicolored point-and-click series of menus eschewed text for simple silhouettes to help users to figure out what to outfit Barbie in next. From the basics, like tank tops and flared skirts with handbags, to exercise gear and dresses, there were a multitude of different outfits and clothing items to test on a paper doll-like figure of Barbie. Some of them happened to come pre-patterned, while others were completely blank for you to fill in to your liking.

This was truly where you could spend hours and hours. There were plenty of basic outfit necessities to help you put together something bombastic or casual for your Barbie doll, but what made it so fascinating was how much the outfit designs (and the user interface) really spoke to the era. It was hopelessly, impeccably ’90s in form and fashion, and that’s likely what made it such a strange and wonderful iniquity that so many remember fondly now.

After choosing the type of clothing, you’d need to assign a print as well as color, if you didn’t have the markers to color on the fabric yourself (and those included left much to be desired). You could choose from a rudimentary selection of colors, then fill in Barbie’s outfit by pointing and clicking. When finished, you could see how the outfit looked on Barbie beyond her 2D paper doll appearance with the game’s 3D renders. You could pose Barbie on the runway or in a bedroom, where you could see her flaunting it all in the outfit you chose.

If you happened to make outfits you were particularly proud of, you could save each of them in a closet-like digital archive, just in case you felt the need to revisit them in the future. Though there weren’t as many fashion options as the game might have you believe, there were certainly enough staples and wardrobe basics to give your dolls a fun change of pace — and a relatively easy way for you to print and customize exactly what you wanted your Barbie to wear. You can see the clothes in action in more of a 3D plane that way, which is good news for you since you’ll be cutting, trimming, attaching accessories, and folding, none of which is as simple as bringing these new outfits to life on your digital Barbie avatar.

Contrary to popular belief, however, actually playing Barbie Fashion Designer wasn’t the bread and butter when it came to why so many young girls actually enjoyed it. This was a full-fledged kit, a miniature “factory,” if you will, that let you not only print out the clothing you designed for Barbie, various fabric patterns and all, but assemble the clothing into real, wearable outfits that you could slip your dolls in and out of, like the Barbie accessories at the store.

For young girls who were forever changing their dolls and swapping clothes between special edition releases, this was a dream come true. The software itself came packaged with paper-backed fabric that would be loaded into an inkjet printer so that designs could be printed directly onto it. From there, the next step was to cut the clothing out and fold, assemble, tape, and stick together to fashion a top, a skirt, a dress, or whatever the order of the day was for your Barbie “fashion model” of choice.

None of this was particularly simple, especially without help from an adult. It wasn’t truly an activity you’d want to leave children alone to parse at the time, but for responsible older kids, it made for a great lesson in learning responsibility and frugality as well as how technology could be used for fun: do you want to waste the limited amount of Fashion Designer supplies on multiple dresses, or do you want to mete them out for the dresses you really care about? With paper in short supply, the game taught endless lessons like these, especially for a young girl like myself who found that rudimentary Sailor Moon costumes were by and large difficult to make with the program, but enjoyed trying.

The clothes didn’t always stay together well (depending on how good you were at constructing them), and you couldn’t always count on the markers matching the colors you wanted for Barbie’s grand gown you spent hours designing. But the end result was a fun, funky fashion choice you had customized yourself, and no other experience at the time could truly offer the same thing.

The Future is Fashion

Barbie Fashion Designer was leaps and bounds ahead of the curve in so many ways. Not only did the game offer a way for young girls to sharpen their minds (and computer prowess) by doing many of the same things they’d be doing outside of a technological environment: playing with dolls, dreaming of their next “fashion show,” and putting their creativity to the test to see what they could come up with.

While the game has had its share of detractors over the years, notably by way of Purple Moon founder Brenda Laurel’s complaints that it “perpetuated a version of femininity that was fundamentally lame,” it also introduced legions of young girls to the joys of gaming, using the PC as a means for being creative and expressing oneself, and how incredible the world of gaming can be.

It’s a shame there’s been nothing else like it in the 25 years since its inception, and there may never be again. It may be dated and old-fashioned now, given that we have apps and 3D printing and so many new technologies that a “fashion empire” in a box feels obsolete. But it can and should live on as a reminder of how, despite what you may think or believe about the world’s most popular fashion doll, Barbie’s always had it goin’ on more than you might think.

Brittany Vincent
Sentionaut
Brittany Vincent has been covering video games and tech for 14 years for publications like MTV, Rolling Stone Popular Science, Playboy, Empire, Complex, IGN, Maxim, and more. She's been gaming for over 25. She's also appeared as a panelist at video game conventions like PAX East and PAX West. When she's not writing or gaming, she's looking for the next great visual novel in the vein of Saya no Uta. You can follow her on Twitter @MolotovCupcake or visit her portfolio at brittanyvincent.com.