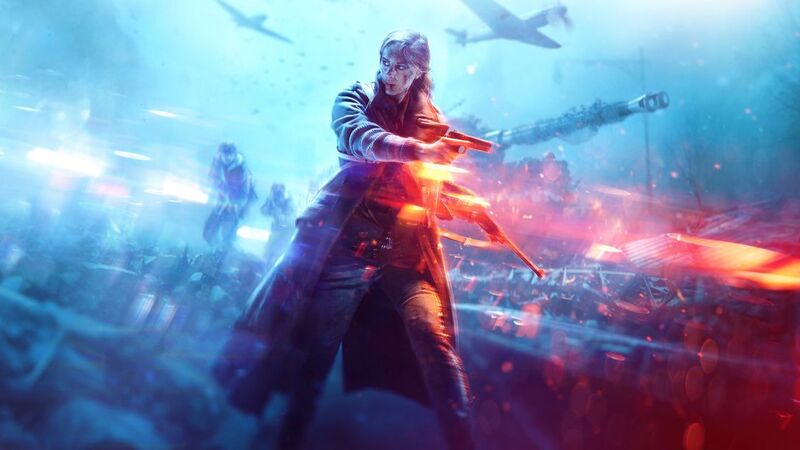 The internet is in uproar (again). Developer DICE’s decision to include a woman on the cover art for this year’s Battlefield offering has, for some reason, antagonised the most vocal parts of the gaming internet.

Within minutes of DICE revealing its new game, detractors on reddit, Twitter and various online gaming forums were spouting their vitriol, furious that DICE had sacrificed authenticity in favour of ‘political correctness’.

Here’s the thing, though: it hasn’t. Women have always played a vital role in the World’s wars, and to ignore that is to be willfully ignorant. From soldiers enlisted in active duty to subversive volunteer groups formed wholly of women, (in)famous Soviet snipers to women providing artillery support for their male comrades, these wars were not won by men alone.

Battlefield V is going back to the World War II setting – something the series hasn’t done since 2010’s Battlefield 1943.

I like to think DICE knew it would immediately get backlash against its sensible decision to equalise the playing field, because in the reveal trailer, one of the first things you see is a mustachioed villain creeping over the player, putting his finger to his mouth – trying to silence you – before a woman leaps in from the side of the screen and cracks him in the head.

‘We won’t be silenced’ it seems to suggest, before showing off more of the game – more of the women – some of which are fitted with a prosthesis. This (surprise, surprise) also triggered some vocal gamers who thought this has all been added into Battlefield simply in a bid to ‘be inclusive’.

Wrong again, I’m afraid: if ‘realism’ really is your argument for not wanting to include women, disabled people or people of colour, you don’t have an argument — many groups of people fought (and died) in World War II… it wasn’t just straight white men.

As such, I highly praise DICE for its decision to show this in Battlefield V. Games (particularly first-person shooters) have focused on the heteronormative caucasian male for so, so long, and DICE and EA’s deviation from that standard deserves praise, not detraction. Whether a small (but vocal) part of the gaming community likes it or not, this will soon be the norm: the goal is equality.

Conversations online have sprung up talking about DICE ‘selling out’ or ‘giving in’ to political correctness. This perception is crazily off-kilter. As someone that’s been working in this industry for over five years and has had the pleasure of meeting developers in studios around the world, I promise you more game developers are on the side of equality than are against it.

There are so many women from history that games like this could celebrate, and so in order to put to bed some of the hateful and ignorant comments we’ve seen floating around since Battlefield V’s announcement, we want to show some of them off.

Born in what we now know as Ukraine 1916 and getting the badass nickname ‘Lady Death’ after joining the army in 1941, Pavlichenko’s story is a surreal one. She was 24 when Germany began its invasion of the USSR, and upon news of the Nazi advance, she immediately signed up to the Red Army’s 25th Rifle Division.

She managed to join the army before the Soviets began accepting women generally thanks to her tenacity, and became one of 2000 female snipers in the Red Army. By most historical accounts, 500 survived the war.

Pavlichenko racked up 187 Nazi kills in her first two and a half months of service near Odessa. Impressed with her skill, Red Army generals promoted her to senior sergeant within months. Within a year, she’d recorded a ludicrous 257 kills. By the end of the war, she’d crossed off 309 targets – apparently 36 of them being enemy snipers.

Not to trivialise it, but doesn’t that sound like a standard Battlefield 1 match? Who snipes the snipers and all that? And some say women don’t deserve to be on the boxart!

Nancy Grace Augusta Wake was a New Zealand-born secret agent during the Second World War – but even her journey there was incredible. After inheriting £200 from an aunt in the 1920s, she travelled to New York and London, training herself as a journalist en route. Embedding herself in Paris during the 30s, she saw the rise of fascism and Nazism first hand, witnessing the brutalisation of the Jewish population on the streets of Vienna.

When France fell to the Axis in 1940, Wake became a courier for the Resistance and quickly became infamous for her ability to evade capture by the Gestapo. The German police nicknamed her ‘White Mouse’ on account of her ability to slip by them consistently. The Gestapo tapped her phone, intercepted her mail – but to no avail.

Fast-forward to 1944. After fleeing to Britain and being formally trained as a Special Operations Executive, Wake parachutes into France and after a series of liasons, rides a bike 190 miles through German checkpoints in order to check in with another Resistance group and communicate to London. She rides back another 190 miles (all within 72 hours) and saves a group of soldiers that comes under fire from Nazi troops thanks to her Spec Ops training.

We’d play that campaign mission in a heartbeat.

Susan Travers was an Englishwoman living in France when war broke out. Initially training as part of the French Red Cross, she became an ambulance driver and is widely believed to have been one of the key personnel aiding a civilian evacuation of Paris. Fleeing to England via Finland, she joined the French Free Forces in 1941 and ended up travelling to North Africa with the French Foreign Legion.

In Libya, her unit was set upon by Rommel’s forces and when she refused to evacuate when the other female personnel were told to flee, she hid with the remainder of her unit sand pits for 15 days – under constant attack. Eventually breaking out under cover of darkness, Travers reportedly took the lead in a vehicle convoy and floored it through a landmine-laden field, leading 2500 troops to an Allied base.

Her bravery got her promoted to General, and Travers continued to fight on the front line with troops in Germany, Italy and France from then on. A true hero.

Daughter to an Indian Sufi master and an American Ora Ray Baker, Princess Noor-un-nisa Inayat Khan was born in Russia, held a British passport and lived in France at the outbreak of World War II. Complicated, eh?

Khan managed to escape German capture as the Nazi’s pushed through France and joined the Women’s Auxiliary Air Force as soon as she was able upon returning to Britain. Clocking her skill in communications, the RAF transferred her to France in 1943 where she became prolific as a morse code relay. Arrested by German intelligence in October that year, she was classified as “an extremely dangerous prisoner” after she gave up no information after a month of interrogation.

Unfortunately, Khan was executed along with three other female spies in Dachau in 1944, but her actions during the war earned her a posthumous Croix de Guerre, and she was also made a member of the British Empire (obtaining an MBE), too.

Women belong on the Battlefield

These are just four incredible women that made up part of the massive events that form World War II. These four women – all of different backgrounds – prove that anyone, from anywhere in the world, could be impacted by the events that all began in 1938.

To say that women don’t have a place in history – that DICE is doing a disservice to the men that died in the war – is not only dangerously ignorant… it’s factually incorrect.

Remember, if you will, the stories of these women when you pick up your pad and play Battlefield V. Remember that bravery, honour, respect and chivalry are not just male traits, but universal characteristics that anyone – whether they’re sat behind a keyboard, in the cockpit of a fighter jet or staring down the barrel of a gun – should remind themselves to practice.