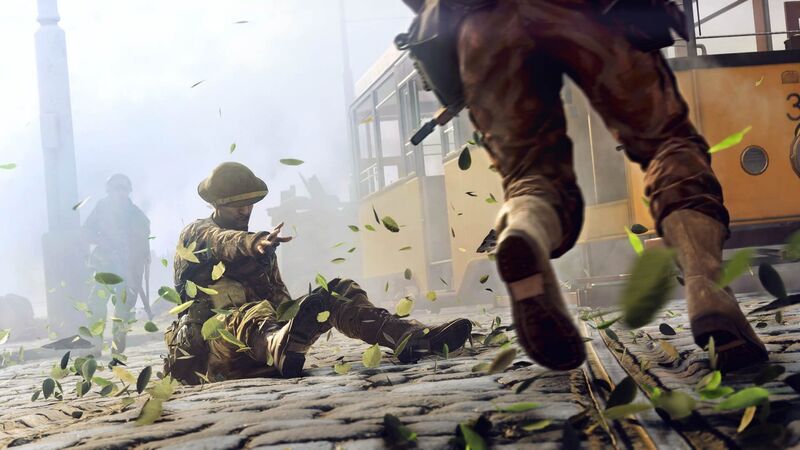 If you’ve ever fancied investing your time in a military-themed shooter, but feel uncomfortable acting out real-life scenarios in real-life conflicts that resulted in millions and millions of people dying horribly (and don’t worry, you’re not alone) then the good news is that Battlefield V might be the game for you.

War, huh, what is it good for, asked the soul singer Edwin Starr in 1970. It’s extremely unlikely he would have anticipated the answer being ‘video games’. Of course, we now know that to be the case. War is arguably the best thing to have happened to video games ever. Just ask the American publisher Activision, who reported in 2016 that their Call Of Duty series had generated sales topping $15 billion.

And video games have been kind to war in many regards. It’s no secret that the U.S. Army actively encourage soldiers to play FPS on leave. They’ve even had their own shooter, America’s Army, used as a recruitment tool, available since 2002. The aim, apparently, is to allow players to ‘virtually explore the Army at their own pace, to determine if soldiering matches their needs, interests and abilities’.

Conversely, there’s been something quite exciting about seeing the rise and rise in popularity of Fortnite this last twelve months, showing that a FPS can be very silly, very fun and not fall into the category of militainment.

But let’s talk about Battlefield V…

NO WOMAN NO CRY

Unless you’ve spent the last six months or so imprisoned in a gulag, you will know that the news that women soldiers feature in Battlefield V – even on the game’s sleeve! – made an awful lot of people, nearly all with Reddit accounts, very, very unhappy.

Of course, sensible people fought back with the facts. During World War 2, 80,000 women served in the Soviet Armed Forces, many on the frontline. The Soviet sniper Lyudmila Pavichenko is said to have killed at least 309 Nazi’s. Major Wanda Gertz, from Poland, fought in The Great War dressed as a man, under the pseudonym of ‘Kazimierz ‘Kazik’ Zuchowicz’. She returned for World War 2 to become the officer and commander of an all-female battalion. And we could go on…

DICE know this, of course, and has infused its new game with this knowledge, and the result is possibly the most refreshing thing to happen to a military-themed FPS in eons. There’s also an argument for saying that Battlefield V might be the most woke FPS shooter ever made.

Based on what we’ve played so far – which is the interactive intro, which takes a multitude of stories from World War 2 and emphatically rams home the message that what you’re about to simulate is recreation of a global fucking atrocity, as well as three ‘War Stories’ (more on those in a bit) – Battlefield V is a game that really wants you to understand that war is a pretty wretched place.

It also wants to tell you stories, treating the global conflict as a canvas for human drama, revealing persons and people whose voices are rarely told. The best example of this is the War Story ‘Tirailleur’ – the word translates as either ‘skirmisher’, ‘rifleman’ or ‘sharpshooter’ – which tells the story of a Senegalese man called Deme Cisse, from French West Africa, who is quite delighted by the prospect of fighting for (and thereby accepted by) a motherland he’s never even seen. Until he gets there.

When he does arrive at the frontline he finds himself being given a shovel, not a rifle, before ultimately, casualties lead to him being called up to fight as part of Operation Dragoon. That’s a real code name by the way. It was the name used to refer to the Allied invasion of Southern France on August 15, 1944.

Some kid, a black kid, whose heritage – whose ancestors’ sacrifice – has been largely erased from the approved timeline of the bloodiest conflict the world has ever seen, will soon pick up a console controller and feel validated. And who says videogames are just a bit of fun…

All of the War Stories we’ve played are wonderfully cinematic – but think of heady cinema like Letters From Iwo Jima (2006), Come and See (1985) and Lone Survivor (2013), not Pearl Harbour (2001). There’s some deft emotional writing in these stories.

For example, there’s one called ‘Nordlys’. It revolves around a young Swedish woman called Solveig Fia Bjørnstad, who must ski into a Nazi base to free a captured scientist being tortured for information that will swing the war in their favour. On one hand, it is extremely stupid. It’s a premise the makers of Rambo might reject for being ‘a bit unrealistic’. On the other, Solveig’s ordeal is written with such poignancy that it’s extremely difficult to play the mission without caring about her fate. It’s refreshing to play a war game where pressing restart feels almost traumatic.

Okay. Put the kettle on, we’re about to go on a bit of a rant.

See, at this point, it’s worth reminding a segment of the gaming Reddit readership that, even within a videogame basing itself within a degree of accuracy concerning World War 2, we’re still talking about a videogame, and as such, things happen within them quite unlike things that happen in reality. Because in reality things can be quite boring.

If flying the Spitfire we presume you get to control later in Battlefield V (based on the interactive trailer we played) was a realistic experience, it would be very little fun indeed. Because flying an aeroplane is really quite complex. Reality is complex. Other than the people who buy games like Combine Harvester Simulator, nobody plays videogames to embrace concepts like reality or complexity. And by that basis – nevermind – a woman, you could have a gun-toting armadillo in Battlefield V and it wouldn’t matter.

DON’T WORRY, WHITE WORKING CLASS PEOPLE ARE IN IT TOO!

There’s a third story we spent some time in, called ‘Under No Flag’, which tells the story of Arthur Bridger, a sort of 1940’s take on Danny Dyer; a street-urchin-cum-wrong un’ who is given the choice of imprisonment or conscription into conflict. It’s a great story, which depicts the redemption of a flawed man. Like all of the stories mentioned prior, it’s indicative of the vision DICE have for Battlefield V; that being a mission statement to draw stories from the shadows and create a game for everyone.

You’ll observe that we’re only just getting to the mechanics of what we’ve played, and the reason for that is that they’re pretty similar to 2016’s Battlefield 1. Yes, there were quirks we found, not so much problematic, but awkward. We will tell our grandchildren about the time we skied into a Nazi base, tried to attack a German unit of soldiers, only to impotently wave our skis at them because the weapon wheel had that as the default choice and not our rifle. Which happened at least five times.

But it seems churlish to spend too much time on such minor quirks when the narrative elements of the game we got to go hands-on with were so emotional, moving… inspiring even. At this juncture, we are feeling good things about the full game. YES, YOU READ THAT RIGHT REDDIT.