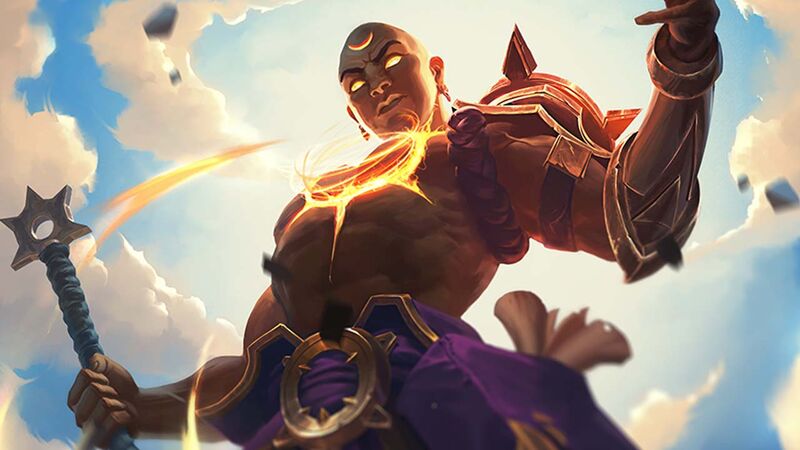 Ever watched a game of League Of Legends and dreamed of playing a MOBA that was just the highlights?  Well, then you’re in luck, because that’s the vision behind Battlerite.

This is a multiplayer online battle arena “light.” The 5-minute MOBA, and for our money, it’s the one of the most refreshing thing to happen to the genre in years. Doing away with the complexities that come with genre staples like item juggling, last-hitting, and the slow lane phase before any action, this is a place where only the fights matter. It’s a place of WASD keyboard movement, because with no automatic targeting, every shot is a skillshot and your mouse is constantly used to aim.

So much so that the oft-used MOBA term is misleading. It might make more sense for you to think of it as a fighting game with a top-down camera. Abilities build up energy just like a fighter, which can be spent on EX abilities, or saved for a super attack.

As the spiritual successor to Bloodline Champions, a lot of the design ideas have carried over from that game and been refined, but with a new esports focus. It’s a highly polished and in many ways a beautifully designed game, with lots of clever ideas built into its combat system.

Each of Battlerite‘s 23 champions has a handful of abilities with of course, their own cooldowns. While they’re always different,  there’s some uniformity in that most characters will have an escape bound to the spacebar, and many of these plucky heroes also have a counter ability.

As you’d expect from a fighting game inspired MOBA, countering is an important tool. Here, if an enemy attacks while you’re countering, a special effect is triggered.

For a melee assassin, this might mean being teleported behind the enemy. Perhaps it’s charging up your weapon, or sending you into a frenzy.

Just imagine keeping that eight second clock in your head for you, your teammate, and two opponents. When will they trigger it? How will it affect my team? The mind games that come with this one entrancing ability means that countering adds more depth to each battle.

In a nice touch, every animation can be cancelled in Battlerite, which opens up a whole minefield of mind games.

It would be boring if you were forced to stand around fidgeting while the enemy counters. But counters here aren’t triggered by area of effect (AoE) abilities. Part of what makes this game so fun is devising a smart ability rotation on the fly. I loved noticing when enemies were counter-happy, and leading with area of effect abilities, making it incredibly satisfying when a plan goes right (or… rite?).

There are triple-A combat systems with less than this level of complexity, but Battlerite doesn’t stop there.

In Battlerite, anything that’s in the air is invulnerable. But what goes up, must of course, come down. It’s genius not only from a design perspective, it also just looks amazing.

Most characters will have one or two abilities with i-frames (invincibility frames) in which they leap into the air or dematerialise. If you’re about to eat a big attack, it’s completely possible to leap over it. If you’ve got a ticking bomb attached to you, you can time your leap so you negate the damage.

This does, of course, blow a cooldown that could’ve been used offensively. But if you can perform an offensive and defensive move at once with the same ability, that’ll earn you some well-deserved highlight material. This massively increases the skill ceiling of all the heroes. It’s flashy, difficult, and great for spectators.

One potential downfall of arena PvP games is the all-healer team composition. Heal-heavy teams can create slow attrition fests (looking at you, WoW Arena) which might be competitive, but are neither fun to play or watch.  Thankfully, developer Stunlock rites this Battlewrong.

In order to keep the game flowing well, the team decided that only a certain amount of health can be regained in Battlerite. If players burst someone for more than 40 damage, the targets maximum health will start dropping too. The only way they can (slightly) raise their maximum health again is by collecting health orbs as a reward for controlling the middle of the arena.

Damage is weighted against this threshold, though which forces attackers into some interesting decisions. How many cooldowns are you willing to burn trying to do more than 40 damage in this exchange?

It’s a fantastic idea, well implemented, and solves a problem that most arena games have had for a while.

A Different Kind of Combo

Unsurprisingly for a MOBA, it’s the varied characters that keep the experience feeling fun.  Battlerite‘s character-specific buffs and debuffs add more of a learning curve to each individual hero, and it makes it worth trying out champions other than your main just so you understand what modifiers you might come up against.

For instance, the thunderous barbarian queen Freya has abilities that apply or consume “static.” Consuming static effectively completes a modifier combo, as you can see in the below GIF:

In this case, the hammer throw on this enemy (with static) sends him flying backwards. If he hits a wall, he’s incapacitated for three seconds — enough to make sure he can’t escape Freya’s wrath.

This is a different kind of combo to keep track of. Less about stun durations and inescapable damage, and more about a parallel min/maxing contest which gives players another dimension to excel in.

With five basic abilities (two of which have EX alternatives), and a super attack, that’s quite a few cooldowns for players to keep track of in a 2v2. Once you really start to know the game, it  begins to feel like a flowchart of “if this, then that” decisions in your head.

For every decision, every event in that flowchart, there’s a mind game at play that forces you to make an interesting choice. Counters are baited. Ultimates are whiffed. Surprises happen. The momentum reverses. If you can juke an attack without using a cooldown, it turns the tables.

This flow also evolves as your skill grows. For example, higher level players will use their counters reactively instead of predictively. Incredibly subtle cues like where your head is looking can either telegraph your attack, or be used as bait. All of this changes the flow.

For a competitive pvp gamer, this is the stuff you want to know. It means the gameplay is deep and worthy of your precious hours getting to know its systems. All of this is before diving into the theory-crafting elements of picking talents and experimenting with builds. In short, there’s a hell of a lot for you to sink your teeth into here.

It’s also good to know there will be players. Indie pvp games are forever dependent on a critical mass of players to keep the game alive. It was never a challenge to get a game in early access, but with the free-to-play launch, the playerbase spike is huge:

The game has also been picked up by esports organisations like ESL and Dreamhack, which bodes well for the future of the game. It’s easy to see why. Esports features like the below are quite rare:

In a sea of LOL imitators, its refreshing to see so many smart design ideas on display here. Thanks to the game’s gleeful disregard of genre conventions, Battlerite feels like something that few free to play games manage — refreshing and dynamic.

Without a speck of randomness in the whole thing, literally everything is skill-based. As a result, victory feels much sweeter. When you die, you know there’s a solid reason. When you clutch, you know you earned it.

Developer Stunlock built a cult following around Bloodline Champions. With this spiritual successor, it’s  finally ready for a bigger arena.