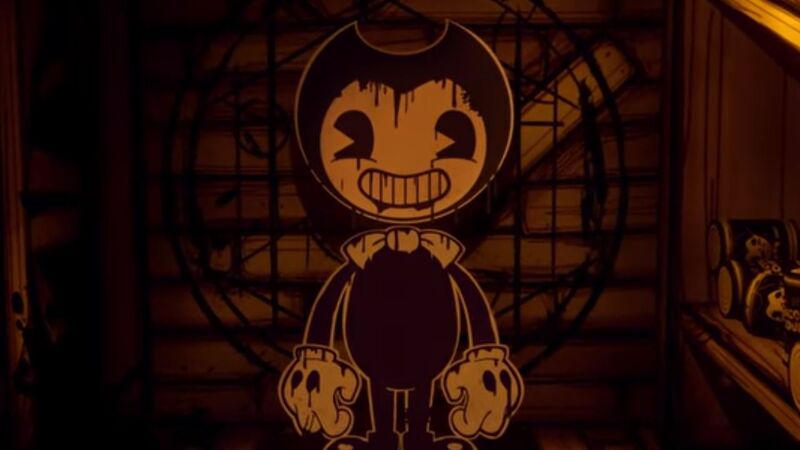 ‘Bendy and the Ink Machine’ Pulls No Punches on Switch

Bendy and the Ink Machine is not a game you will easily forget. We played through the recent Switch version, and it’s also not an easy game to describe. On the box it calls itself a first-person puzzle horror experience, which is certainly accurate. But that depiction does little to get across the uneasy tension of every step and truly bizarre world created by indie studio TheMeatly Games.

Those with long memories will recall the equally eccentric Ubisoft game XIII when you first find yourself in the shoes of ex-animator Henry. The design has that same feeling of being stuck in the pages of an adult’s comic book. All muted colours, flat objects, and slightly unrealistic, off-kilter details.

However, you could also describe Bendy and the Ink Machine as Epic Mickey crossed with Until Dawn: Rush of Blood. Or BioShock in Disneyland. It may even remind you, as it did us, of the movie IT. It bends a positive childhood memory into a distorted freak show, somewhat juxtaposing Bendy with the family-friendly appeal of the Nintendo Switch.

As those descriptions no doubt suggest, Bendy is unique. Originally released on PC, its console release has brought all four original chapters and a fifth new chapter in a nice little six- to eight-hour package. We relived the entire thing on Switch, but PC gamers will get the fifth chapter for free.

Bendy on Switch is Just as Horrific

Discovery is such a huge part of Bendy and the Ink Machine that we dare not say too much or we’ll rob you of a chunk of the fun. You’re playing as Henry who – at the start of the game – is sent a letter from Joey Drew of Joey Drew Studios, a colleague from his distant past.

It becomes evident that 30 years ago, Henry and Joey had set off on a journey to create an animation studio. Something akin to a dark alternate reality to the Disney Universe. Their time together must have ended abruptly, as Henry hasn’t been back to the workshop since. He even comments that he had “wasted so much time in that chair” when coming across his old desk.

Nevertheless intrigued by the letter, Henry rolls up to the workshop to find it abandoned and in a state of disrepair. TheMeatly Games wisely avoids spelling anything out directly. There are BioShock-like recording devices scattered about that give you insights on what happened to Joey Drew Studios from employees, but mostly the world design and frequently creepy soundtrack is left to tell the story.

It’s unsettling, to say the least. The dead-eyed stare of Bendy cut outs scattered about the premise are spooky. While the way debris, desks, and equipment are set up gives the impression that everyone in the company just vanished suddenly decades ago. The black ink everywhere, and notes scrawled on the wall in black blood, suggests the improbable – the impossible – as the reason for that vanishing act.

The overwhelming sense that something bad happened, and something bad will happen again at any second, haunts every step you take. The deeper you go into this workshop, the more that feeling intensifies. You’ll begin questioning reality, and… wait, we’re saying too much. Trust us when we say Bendy and the Ink Machine makes you intensely curious, which dives you past your fears.

Overall we’re big fans of Bendy and the Ink Machine, and the Switch port has done Bendy proud. But at times the pure gameplay beneath the surface doesn’t quite match the excellent setting. Puzzles don’t necessarily get in the way of the story, but they tend towards fetch quests and tracking back through areas already searched. While the narrative is understated, the game often spells out exactly what you need to do, leaving your brain on the backseat.

It’s not ideal, but at least old areas change and evolve with time. New doors will open or previously closed areas become accessible. Or there are new jump scares added in. Despite this, when you consider all the subtlety in the atmosphere and story, the puzzles are a bit like getting hit over the head with a shallow shovel.

There were a handful of other design decisions worth questioning, too. Why is the font for the audio recordings so hard to read and the voiceover so hard to hear? It’s annoying. And why does a hero who was working in animation 30 years ago sound so young? Why do you not cast shadows or your feet leave ink footprints after wading through a puddle?

Minor gripes, and perhaps unfair to level on an indie studio. But bringing Bendy to Switch would have been a great opportunity to address these things.

To concentrate on the positives, the way the ink moves and splashes across the stage – because animation studios have endless litres of ink travelling between rooms in leaky tubes – is great. And there are nice little touches here and there, like an instrument you can play or a game of darts to waste some minutes on. These moments suggest that the visual aberrations aren’t the result of a lack of passion or desire, but budget.

Is Bendy and the Ink Machine Good?

Previously released on PC, the team of internet funny men and women over at machinima pioneers Rooster Teeth are responsible for bringing Bendy and the Ink Machine to consoles. The game is now out on Switch, PS4, and Xbox One, even in boxed form in some regions.

Those Roosters deserve some extra corn, because they’ve done us all a service by spotting this gem and getting it into more hands. Bendy and the Ink Machine has its moments of frustration and the gameplay can tend to the shallow side, but its mind-bending story and trippy world will keep you glued to the screen from its past through to its future.