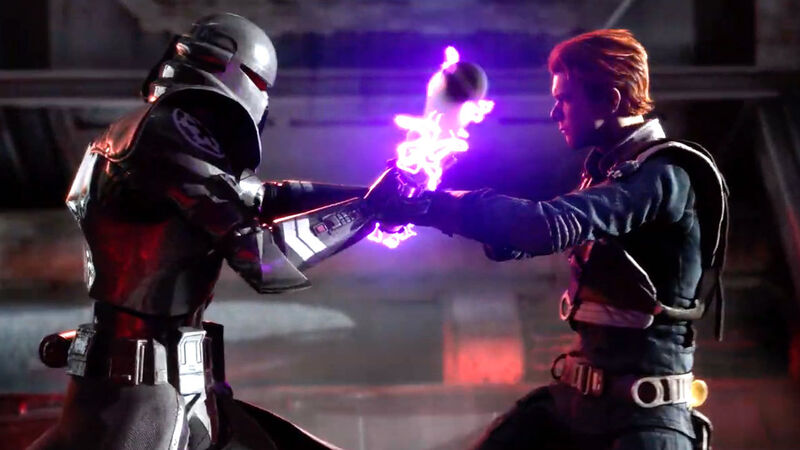 The sci-fi genre has been so popular over the years that many game devs have been inspired to create awesome games where you rub shoulders with aliens, set off on an intergalactic journey, and more. Let’s load up our rocket ships and check out the best intergalactic games available for PC right now!

You’ll follow the story of Cal Kestis, a Jedi Padawan who narrowly escaped the purge of Order 66 following the events of Episode III: Revenge of the Sith.

On a quest to rebuild the Jedi Order, you must pick up the pieces of your shattered past to complete your training, develop new powerful Force abilities, and master the art of the iconic lightsaber—all while staying one step ahead of the Empire and its deadly Inquisitors.

Ancient forests, windswept rock faces, and haunted jungles are all unique biomes you’ll explore in Jedi: Fallen Order, with the freedom to decide when and where you go next. As you unlock new powers and abilities, opportunities open up to re-traverse maps in new ways, leveraging the Force to augment the way you explore.

Move quickly, however, as the Empire is actively hunting your every step in their effort to exterminate all remnants of the Jedi Order.

The combat in Jedi: Fallen Order has been compared to the likes of hardcore RPGs like the Dark Souls series, Bloodborne, and various other titles, due to its challenging boss fights and a heavy emphasis on timing attacks and blocks correctly.

From vast lightsaber customization to throwing Stormtroopers around with your powerful Force abilities, there’s plenty of fun to be had in a galaxy far, far away.

The game that saw humanity reach for the stars and take their place amongst our celestial neighbors. Mass Effect is a huge achievement in storytelling and ambition.

The original Mass Effect put BioWare on the map as a top-class developer, and made sure everyone was paying attention to them as they released one of the finest sci-fi trilogies the world has ever seen.

As one of the galaxy’s most elite soldiers, experience heart-pounding action, as well as interactive storytelling filled with intriguing characters and branching conversions.

A graduate of the Systems Alliance N7 special forces program, Commander Shepard is the protagonist of the original Mass Effect trilogy with the oh-so-little task of defending the galaxy from a deadly race of mechanical beings—known as the Reapers.

Although their appearance and personality are decided by your actions, Shepard possesses the combat skills that pay the bills, and the sweet talking charisma too.

Their skills over fellow soldiers even sees them become the first human to ever join the Spectres—an elite special task force sworn by the Citadel Council.

If you can wait until May 14th, then that’s the date for Mass Effect Legendary Edition’s release! This will include remastered gameplay for the whole trilogy, plus new additions to Mass Effect’s aiming, controls, and more.

In the popular space sim Elite Dangerous, you’ll take control of your own starship in a dangerous galaxy. Bringing gaming’s original open-world adventure into the modern generation, join a connected galaxy, and experience an evolving narrative.

You’ll be able to upgrade your ship and customize every component as you hunt, explore, fight, mine, smuggle, trade, and survive in the cutthroat galaxy of the year 3301. Do whatever it takes to earn the skill, knowledge, wealth, and power to stand among the ranks of the Elite.

The 400 billion star systems of the Milky Way are the stage for Elite Dangerous‘s open-ended gameplay. The real stars, planets, moons, asteroid fields, and black holes of our own galaxy are built to their true epic proportions in the largest designed playspace in video game history!

With over 50 awards and nominations, No Man’s Sky is the beautiful open-world single-player FPS from Hello Games with hours of epic voyages at your fingertips.

Inspired by classic science fiction, the game takes you across space exploring planets as you go. No Man’s Sky is heavily geared towards collecting resources to level up your character while you search to find the center of the universe rather than having a specific story arc.

The developers have stated that although No Man’s Sky is open-world, the universe is so big the chances of you running into another player during your voyages are incredibly slim… that’s a lot of space to explore!

Have you ever wanted to build your own space civilization? Stellaris is a feature-rich space 4X that lets you take your people to the stars and build their destiny there.

From a single planet to a galaxy-spanning empire, Stellaris offers a huge amount of variety in the options available to you as you wage war and conquer.  Do you want to be a peace-loving Federation assimilating through cultural contact, or a warlike species running rampant amongst the stars? Stellaris lets you be all that and more in this absolutely colossal and deep grand strategy game set amongst the stars.

A duo that redefined the RTS genre, now looking better than ever! The Homeworld Remastered Collection sees you control a fleet and build an armada across a vast array of single-player missions in two huge sci-fi strategy titles, as well as bonus archival versions of Homeworld Classic and Homeworld 2 Classic in their pure, original release form for modern computers.

Choose your unit types, fleet formations, and flight tactics to ensure that your crew and spaceships are prepared for each and every strategic situation. Utilize advanced research to construct more than 100 ships ranging from light fighters to huge carriers.

Take the battle online with competitive multiplayer modes as Homeworld and Homeworld 2 combine into one centralized mode—allowing up to eight players to use races, maps, game modes, improvements, features, and technology from both games for unlimited engaging space battles on a grand scale.

It’s time to own the first-ever game to capture the essence of dread from Ridley Scott’s renowned horror/science-fiction film with Alien: Isolation.

This first-person horror from Creative Assembly promises a gripping encounter like no other, as well as a series of intense DLCs that add more untold and intense stories to your gameplay experience.

You’ll become Amanda Ripley, daughter of Ellen Ripley, and find out what became of her mother fifteen years prior. Stealth your way through a world filled with terror and mystery as you’re hunted down by the ghastly xenomorphs.

Players will go up against an AI which adapts to your methods of evasion in order to kill you in several brutal ways. Take shelter in various locations including ventilation shafts, lockers and in dark corners to stand the slightest chance of escaping this space-age threat. As well as escaping from Xenomorphs and “facehuggers” trying to lay eggs down your throat, AI androids called Working Joes provide an eerie foe throughout the game.

Simply hiding from these creepy, expressionless robots has little effect if you’re within range—as the androids will pursue you, kicking and swiping as you quiver under a table. So we recommend giving them a wide berth!

Crash-landing on an unknown planet is the least of your worries in the “Overwhelmingly Positive” Steam-rated sci-fi colony simulator RimWorld.

You will be tasked with building a colony from the ground up, exploring dangerous terrain to gain research, recruit new colonists, fight alien lifeforms and opposing factions.

Witness the tragic, twisted, and triumphant stories that RimWorld throws at you through the AI Storyteller. Your chosen storyteller will determine your experience of unique and random events featuring imprisoned pirates, desperate colonists, mass starvation and survival of the fittest.

In the game, you can turn your crew of crash-landed survivors into a vibrant colony by acquiring new people by any means necessary— including capturing them in combat and forcing them to join your ranks if they want to survive,  buying them from slave traders, or taking in those willing to earn their keep in exchange for refuge.

The game is an incredibly in-depth base builder that’ll test your ability to multitask as you manage the colonists’ needs against the progress and security of your base.

For these great games and more, visit Fanatical.com!