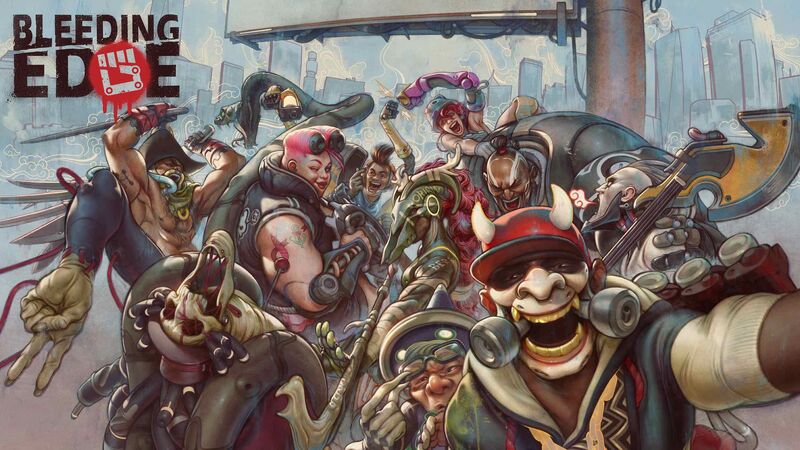 Ninja Theory is known for being a forward-thinking, experimental studio. Recovering from its divisive, too-edgy-for-you DmC: Devil May Cry with the universally lauded Hellblade, the studio is back on the up.

To that end, Ninja Theory’s latest project – Bleeding Edge – was always going to be an experiment. It’s a team combat title that can’t seem to move out from under the shadow of Overwatch, and it’s the first game the developer is releasing under the banner of Xbox Game Studios. Bleeding Edge has a lot to prove.

In order to stand out from the pack – from the smooth lines of Overwatch’s utopian sci-fi, the evolving cartoon that is League of Legends, the messy scribbles of Drawn to Death – this Cambridge-based studio has chosen to celebrate a decade that revelled in high-tempo nihilism and redefined pop culture as we know it.

Ninja Theory has developed a love letter to the ’90s.

From Pores to Panels

“There was a point where the game was a lot more realistic – where you could see all the pores on the characters and everything,” explains Aaron McElligott, lead artist on the project. “But over time the game told us what it wanted to be – we couldn’t replicate that kind of realism in the environments and everything else, so we started simplifying and leaning into what you’d expect from a fast-paced, sort of arcade-y game.”

That, McElligott tell us, is when the anime inspiration started to creep in. Forgoing the super-realistic art style in favour of something altogether more stylised, the team started looking at Ghost in the Shell, Akira and other exports of Japan’s 90s sci-fi boom.

“The game was becoming too dark and gritty, and that’s not what we were really going for we – we needed to look at something more light-hearted” he laughs. “So that’s when we started looking at this anime that nobody seems to know called Tekkonkinkreet, which is full of this really weird style with very unusual characters – but which are all very simplified.”

Tekkonkinkreet’s massive, stylised buildings “with big stripey paint jobs” and bright sunny world left a meaningful impact on McElligott and the now more utopian world of Bleeding Edge. “Something about this bright, beautiful world with a really violent undertone worked for this game,” he explains, “but we needed a character to bolster that, and get people on board.”

And that is how Buttercup – arguably Bleeding Edge’s bravest, most unexpected character design – was born.

Buttercup– a 38-year-old American biker – is a plus-size character that rides around on a massive motorcycle tyre. Her backstory tells us she lost her legs in a biking accident, and hustled to get the black market mods installed that could allow her to take to the road again.

The fact that the launch roster for a triple-A game has a plus-sized, 30+ woman as a playable character ties in with that kind of euphoric, hopeful sci-fi that shows like Star Trek set the tone for decades ago – and that plays into what Ninja Theory wants from this game.

Bleeding Edge’s whole vibe to be ‘what futuristic felt like in the 90s’. The world Ninja Theory has created revolves around augmentation and transhumanism – where you can go out and get your body upgraded like you’d get a tattoo or piercing today. It’s as much about self-expression as it is about modification.

“The influences we’ve picked up from Ghost in the Shell, from Akira – those beautiful but very simple designs – that’s what we wanted to get across in the game.”

Though the roster of 12 announced characters have this retro-cyberpunk feel, there’s another key inspiration in many of their designs: music. This is most obvious in Nidhoggr, the Norwegian metalhead that was so metal he cybernetically enhanced his neck, so he could headbang even harder, shaking off his birth name Steiner Foss and becoming the Death Metal icon, Níðhöggr.

“I am a big metalhead,” nods Daniele Galante, senior sound designer on the game. “And I can tell you, making the sound for a guy that hits people with a guitar axe – that’s a lot of fun.”

The sound design of the goes beyond the skin-deep portrayal of the central cast, though. The OST – which plays under the action all the time, mixed to be present but not overwhelming – has also been inspired by some of the most prominent trends of the 90s, and the result is a catchy, funk- and house-inspired soundtrack that fits the world perfectly.

“There’s a lot of 90s in there,” laughs David Garcia, audio lead on the game. “It’s the music I listened to as a kid – DJ Shadow, Kid Koala, Thievery Corporation – it’s a mishmash of a broader sound. But that’s the same with the characters, right? They all build themselves with parts, with the pieces they think express themselves the most from different styles, and we do the same with the music.

“You can hear funk in there (we love taking the horn stabs!), you can hear the house and the bass we take from that, and it’s not quite 90s but you can hear dubstep, too. We cut it all into pieces, and we have this new thing – but you can still recognise it.”

If you’re a gamer of a certain age, the game resonates with a warm nostalgia – even though it’s a remarkably futuristic game thanks to the tech and the setting it occupies. And, as Galante explains, that was intentional.

“We knew that this was kind-of a futuristic game when we joined the project, but we didn’t really want to sound sci-fi – or classic sci-fi – so we aimed to sound how everyone thought the future would sound back in the 90s! So the sound design, and the music, needed to be fun.”

Even the way the combat sounds, the way each character has their own audio profile, sounds like 90s cartoons. Garcia and Galante reference Dragon Ball Z, Akira, One-Piece and JoJo’s Bizarre Adventure – all of which feature ‘the most stylish sound design’ – as sources of inspiration for how they wanted the combat in the game to sound. And it paid off, because even in the chaos of 4v4 battles, you feel like cool… that very particular cool that anime manages to portray.

“We even listened to anime soundtracks, the older Disney movies – but all our references are older. We kept them older,” adds Garcia. “With Zero Cool, the gamer character, we even went a bit older, back into the 80s with 8-bit sound effects and music, too.”

Turning a Moba into a beat ’em up

The gaming bleed through doesn’t end with Zero Cool, though. Bleeding Edge draws a lot of comparisons to MOBA or hero shooters, but its design inspiration actually comes from somewhere else entirely… but once again, it’s grounded firmly in the 90s.

“Street Fighter – and its cast of international characters – are right there in the original art bible I put together for the game,” Warwick Mellow, the game’s principal animator, explains.

“The idea that every character is a protagonist, that all of them could appeal to someone enough for them to want to play them for hours and hours and hours, making them all readable at first glance, giving them idle animations… we see it like a bit of a throwback to the games that we loved playing back in the day, and we want people to pick up the controller and dive in like you would in Street Fighter.”

When it comes to art, music and game design, Bleeding Edge is a kitbash: an amalgam of parts curated and assembled by a passionate team with a steady hand.

It’s certainly a gamble – a studio practised in narrative-lead, single-player games moving on to a project that’ll go toe-to-toe with the untouchable giants in the MOBA and hero shooter world – but Ninja Theory is confident in its product.

And it should be: the gameplay is solid, addictive and easy-to-pick-up, difficult-to-master (echoing those Street Fighter inspirations), and the design really stands out from the pack.

With Ninja Theory planning a long tail for this game, we could end up getting a hit of future-90s nostalgia every couple of months – digging into some of the deepest cuts of 90s funk, referencing the most obscure 90s anime, elevating that fresh 90s aesthetic to the heights it deserves. If that’s the promise Bleeding Edge is making, it’s going to be a great investment.