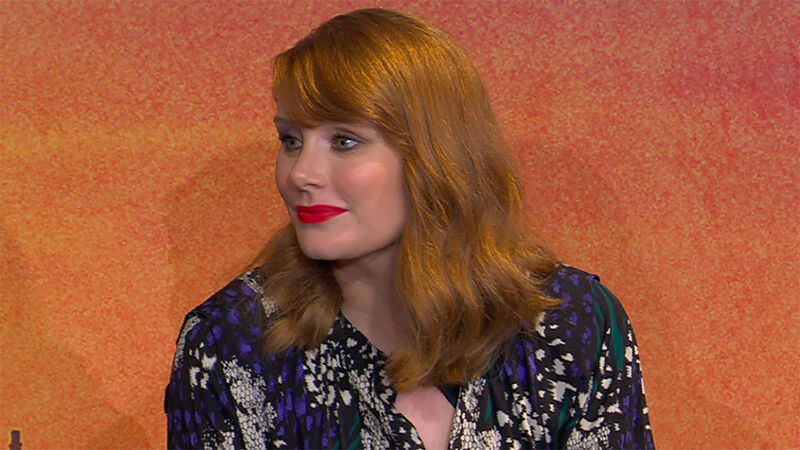 When asked what it was like to be involved in Star Wars as one of the directors on the first season of the Disney+ series The Mandalorian, Bryce Dallas Howard quickly replied, “Magical.”

Dallas has been directing shorts for several years and now makes a big leap with her first episode of TV with The Mandalorian’s fourth installment, entitled “Sanctuary.” The actor, known for roles in projects like Jurassic World and Rocketman, spoke to Fandom about directly stepping into a galaxy far, far away, after growing up so close to it.

Describing the atmosphere behind the scenes on The Mandalorian, Howard told Fandom, “So here’s the reality: every single person on those sets are obsessed. And no one is necessarily any more of an expert than anyone else, because everyone is equally passionate. And so it is absolutely exhilarating to be on a set and to see Dave Filoni talking with one of the crew about the x, y, and z [of Star Wars].”

She elaborated, “Really, it’s one of those things where, when you’re on that set — and I hope that this is not incredibly dorky for me to say — but it’s like everyone believes in the Force. It’s like that’s where our heads are at. So it’s just not a normal job on so many levels, and I think that getting to be a part of that, and certainly getting to be a filmmaker in that world and under the mentorship of Dave Filoni and Jon Favreau, it was just something I couldn’t imagine.”

Howard’s episode will introduce Gina Carano as Cara Dune. While she couldn’t get too specific on what’s to come after we met her, at a recent fan screening of the first three episodes of The Mandalorian, Carano said Cara, previously revealed as a former Rebel Alliance soldier, “goes a little bit rogue; she’s a little bit of a loner.”

Carano went on to describe Cara as passionate and “a bit of an adrenalin junkie.”

The actor continued, “What I love about her so much is I can be so much stronger with her. I believe in her and I absolutely love playing her.”

Almost anything to do with Star Wars is kept as quiet as possible when it comes to story elements, and Howard said that, working on The Mandalorian, “everything is such a secret, you feel like you’re part of this little club; you’re making this thing together!”

The director added, “You’re playing in this sandbox and you can’t believe you get to. It is an honor and a privilege beyond anything I can explain in my career.”

As the daughter of renowned director Ron Howard, the Jurassic World star said of Star Wars: “It’s personal to me, because I grew up around George [Lucas], and was on the set of [Ron Howard-directed, George Lucas-produced] Willow and getting Star Wars figures as Christmas gifts from him, so this is deeply important to me. But, it’s also deeply important to everyone else, you know?”

The Mandalorian is implementing groundbreaking techniques in terms of filmmaking via its use of virtual reality sets that are visible both to the actors and crew during production and to the cameras filming them. Howard explained this was a big part of the appeal for her as well.

“I am obsessed with emerging technology. Obsessed,” she said. She noted that she’d spent a lot of time learning more about these rising new aspects of film and studying the technical aspects of movies she worked on through the years like Spider-Man 3, Terminator: Salvation and the Jurassic films.

On top of that, she revealed, “When my dad did Solo, honestly, I was like, ‘Hey, you know that word nepotism? I’m calling it in. I am shadowing you on set.’”

Howard’s time on the Solo set with her father then allowed her to talk to people from Lucasfilm and ILM, who in turn learned more about her interest in filmmaking and technology — she noted she also spent time with Dave Filoni — and word got back to Jon Favreau as he sought out directors for The Mandalorian.

Summing up her experience working on The Mandalorian, Howard remarked, “It’s just been incredible. From a storytelling perspective, it’s absolutely exhilarating, and on another level, but from a technological standpoint, there’s no other place that I would rather be on planet Earth.”