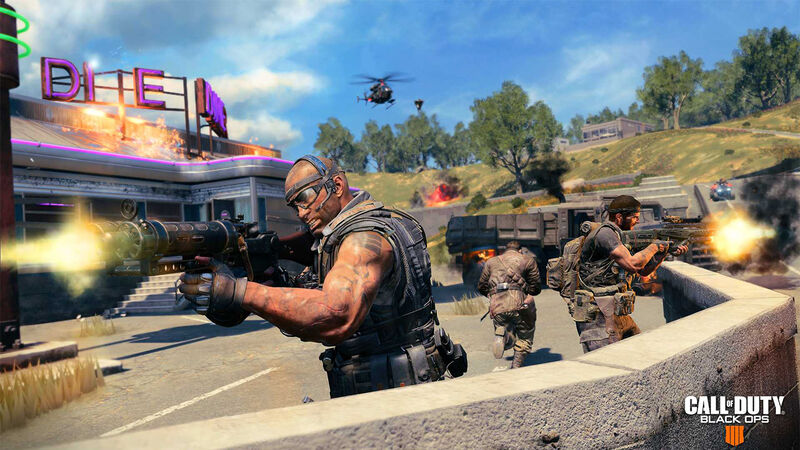 Battle royale is all the rage in the shooter space. So, naturally, Call of Duty: Black Ops 4 has it covered with Blackout mode. The thing is, Blackout isn’t your average battle royale game. In fact, there are some key differences that make Blackout stand out and spice up the battle royale genre. Here are five of the ways Blackout shakes things up for battle royale fans.

Battle royale games tend to err on the side of tactical. Usually that means an incredibly… slow… pace. Not for Blackout. Blackout has been built with speed in mind. From zippy sprinting and fast-paced gunplay to speedy looting and less waiting around for matches to kick off, Blackout gets you in and out faster so you have more shots at being number one.

TAKE TO THE SKIES

In your typical battle royale game, you start the game tumbling out of the sky. This is true of Blackout, but it also lets you get back into the sky in a number of ways. There’s a chopper that’s great for ferrying your Duo, Quad or just your lone-wolfing self around the map.

If you’re up high enough, take a leap of faith then hold the jump button. You’ll activate your wingsuit and float to no-damage safety. If a superhero landing is more your style, ditch the wingsuit for the Mobility Perk. Its main buffs are all about faster movement, but the Perk also packs zero fall damage. Activate it, then jump from that impossible height to get the drop, literally, on an unsuspecting foe.

Equipment is an entirely optional pick-up in Blackout. But you’d be entirely crazy to not try to master the various items. Lock down a defense with slowing and cutting Razor Wire or bulletproof Barricades that also slow a foe’s roll. Drop a Trophy System to destroy incoming Lethals and Tacticals and explosively fortify an entrance with deadly Mesh Mines or movement-sensing Cymbal Monkeys.

When you’re feeling offensive, there are powerful blinding and exploding throwables. Then there’s the one-hit-kill potential of the Combat Axe. For more tactical plays, use a Sensor Dart or Recon Car to safely scout out a potential enemy stronghold.

Perks are a big deal in regular Call of Duty multiplayer, and that’s no different in Blackout. Scoring and popping the right Perk at the right time can mean the difference between fragging or being fragged.

Match your play style to your Perks for a better shot at victory. Pop Looter to make it even easier to find essential items and loot-stacked stashes. When hunting, use Dead Silence and Mobility to creep up on your unsuspecting prey faster. When hunted, activate Paranoia to be alerted when an enemy aims at you and Awareness to hear faraway footsteps.

When the lead starts flying, Medic is the perfect Perk for faster healing and teammate reviving. Combo Medic with Reinforced to dampen explosive or fire damage and resist those powerful stun grenades.

THREE GAMES IN ONE

Blackout is three tight shooting experiences rolled into one. At the top level, there’s the battle royale mode where you’re simultaneously hunting and being hunted by scores of other players. Then there’s the core Call of Duty multiplayer gunplay.

This can take place in open fields, new shootout locales, or familiar fragging places like Nuketown and Firing Range. This moment-to-moment gunplay is like a quick round of deathmatch, minus the respawns. Finally, there’s Zombies.

Keep an eye out for the blue beam of light in the sky to find the sprinting dead in a handful of locations. If you’re up for a tough fight, hunt down the zombie boss below the red beam. Return the undead to full dead status to score Zombie-specific loot, like the player-melting Ray Gun or a devastating double-barrel LMG.

Be the last fraggin’ player standing in the Blackout mode of Call of Duty: Black Ops 4 available now on PS4, Xbox One, and PC.