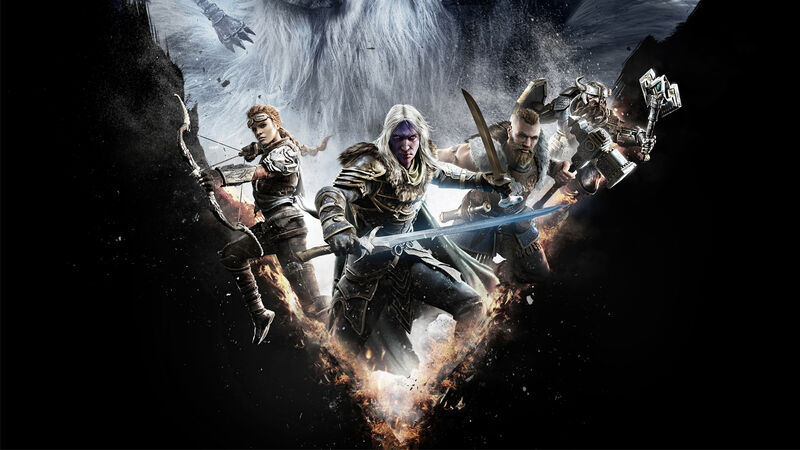 Companions of the Hall: Meet the Avengers of Dungeons & Dragons

In Dungeons & Dragons: Dark Alliance, a band of adventurers known as the Companions of the Hall journey to Icewind Dale, a frigid land in the Far North, to stop an alliance of enemies from obtaining a powerful artifact known as the Crystal Shard.

The Companions are composed of iconic heroes that have appeared throughout various D&D games, books, and editions of the tabletop roleplaying game. While they might not share the lighter tone of the Avengers, they are the mightiest heroes of the Forgotten Realms.

Drizzt Do’Urden is the most famous adventurer in D&D history. The dark elf—better known as a drow in D&D—has his roots in the Underdark, an impossibly massive underground system of caverns and tunnels filled with deadly creatures including gray dwarves (duergar), death tyrants, and all manner of trolls.

Drizzt spent his formative years in Menzoberranzan, a drow city-state where families worship Lolth, the Queen of Spiders, and wage secret wars against one another in order to rise to prominence and earn their goddess’s favor.

Drizzt forsook the ways of his people, however. He was largely raised by his father, the famed weapon master Zaknafein, and, like him, came to dislike the brutality that is customary to drow society. During a raid on the surface world, Drizzt refused to kill an elf child. This drew the ire of Lolth, and House Do’Urden fell out of her favor.

As a result, Zaknafein was sacrificed to Lolth in order to appease her. Not long after, House Do’Urden was attacked by another house. Drizzt escaped Menzoberranzan in the ensuing chaos, and snagged a statuette in his departure that allows him to summon Guenhwyvar, a panther that lives on the Astral Plane.

Once on the surface world, Drizzt journeyed to Icewind Dale. He wields two scimitars and fights to protect his new home from the monsters that would use the Crystal Shard for malicious purposes.

Check out this Drizzt spotlight on D&D Beyond for ideas, tips, and tricks on how to bring Drizzt to life in your game of Dungeons & Dragons using their digital toolset!

Bruenor Battlehammer’s birthright was to rule as king over Mithral Hall, a dwarven stronghold in a treacherous mountain range in the Far North called the Spine of the World. But monsters seeking the Crystal Shard overran Mithral Hall, forcing the dwarf and other survivors to take refuge in what is now known as Dwarven Valley.

In their new home, the dwarves set up trade with the Ten Towns, a lone network of settlements that attracts criminals, outcasts, and exiles seeking a fresh—albeit frigid—start in the Far North.

Though Bruenor always dreamed of reclaiming Mithral Hall, his new home in Icewind Dale came with its own challenges. A goblin raid on Termalaine in the Ten Towns attracted the attention of the Battlehammer clan. There, Bruenor discovered a young human girl who survived the attack, and he took her in as his daughter. He named her Catti-Brie.

Bruenor and Drizzt later met in Icewind Dale. Despite his misgivings about the drow, Bruenor came to trust and befriend the drow. Drizzt would later train Catti-Brie and Wulfgar, a barbarian who was formerly indentured by Bruenor.

The dwarven fighter now fights alongside Drizzt and the other members of the Companions in hopes of reclaiming Mithral Hall for his clan.

Catti-brie is a human archer and the adoptive daughter of Bruenor. Her mother died in childbirth, and her father was killed in Termalaine during a goblin raid. Although she knew her first name was Cataline, she did not know her surname when she was discovered by Bruenor. The dwarf decided to give her the last name Brienne and shorten the two to Catti-Brie.

As a young girl, Catti-brie warned Drizzt about the bounty hunter Roddy McGristle, who was seeking him. Roddy kidnapped Catti-Brie as punishment. Drizzt saved her, and the act was instrumental in Bruenor coming to trust the drow.

Catti-brie has served as a moral compass to Drizzt and Wulfgar. Raised by dwarves, she has a dwarvish accent and is as stubborn as her father. With no recollection of her life before she was adopted by Bruenor, she fights with deadly precision with her bow and arrow in order to protect Icewind Dale from the creatures that seek the Crystal Shard.

Check out this Catti-brie spotlight on D&D Beyond for a look at how to have Catti-brie join your game of Dungeons & Dragons using their digital toolset!

Wulfgar is a human barbarian whose tribe journeyed throughout Icewind Dale. As a pup, Wulfgar was flag bearer for Heafstaag, king of the Tribe of Elk. His tribesmen were killed after invading Ten-Towns, however. Bruenor spared Wulfgar’s life—much to the boy’s chagrin—and forced him into servitude for five years and one day.

Over his time with the Battlehammer clan, Wulfgar and Bruenor’s tense relationship evolved into one that was more akin to a father-son relationship. But it was Cattie-brie who helped Wulfgar learn that he could be more than just a ruthless barbarian.

As Wulfgar’s servitude neared its end, Bruenor asked Drizzt to train him to fight. Wulfgar now wields a colossal hammer crafted by Bruenor and has set his sights on conflicts that are much bigger than those that pester the Reghed barbarians that roam Icewind Dale.

Regis is not a playable character in Dark Alliance—and for good reason. The halfling thief is wont to avoid combat, though he will occasionally sneak behind distracted enemies to land a deadly blow.

Regis had a difficult upbringing on the streets of Calimport, a port setting in the continent of Faerun. He spent his childhood stealing and begging before catching the eye of Pasha Pook, who headed a thieves’ guild. Although the two had an agreeable relationship, Regis eventually stole a magical ruby pendant from the guildmaster and fled, eventually finding himself in Icewind Dale.

The halfling has joined his fellow Companions on quests on occasion.

Michael Galvis
Michaelgalvis
Michael Galvis is a tabletop content producer for D&D Beyond. He is a longtime Dungeon Master who enjoys horror films and all things fantasy and sci-fi. When he isn’t in the DM’s seat or rolling dice as his anxious halfling sorcerer, he’s playing League of Legends and Magic: The Gathering with his husband. They live together in Los Angeles with their adorable dog, Quentin.