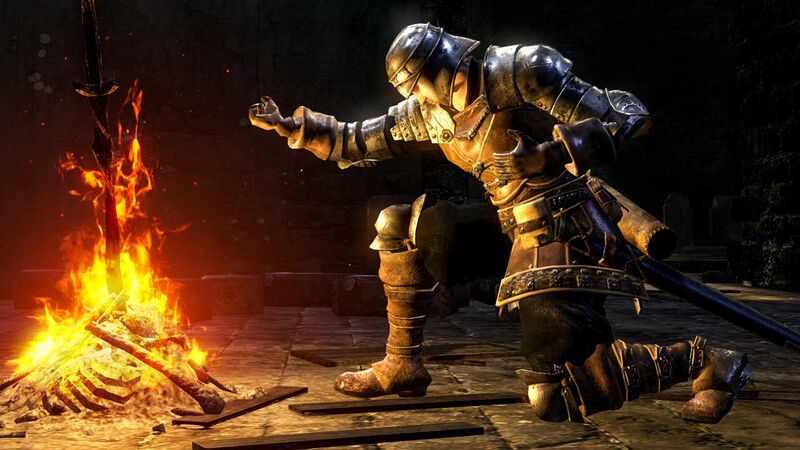 Let’s make one thing clear as early as possible; Dark Souls Remastered is very much just Dark Souls, remastered. Fans expecting the full remake treatment with extra content or vast improvements to the core gameplay are likely to be disappointed. This is the true, authentic Dark Souls experience, made pretty for the latest generation of consoles. Nothing more — and that’s perfectly okay with us.

There are a whole host of hollows out there yet to take on the mantle of the Chosen Undead and this will be the perfect opportunity for those players to jump in without having to dust off their PS3 or download DSfix on their PC. Higher quality visuals, a decent (read: not broken) framerate and, in the case of the Switch version, portability — which should mean that regardless of where you play it, this remastered version will be the ultimate version of the ultimate Souls game.

From the hour or so that we played of the PS4 Pro version, these promises check out. Early environments like the Undead Asylum, Burg and Parish have never looked so gorgeously grotty. It’s clear the effect comes mainly from higher resolution textures, which do a lot of the heavy lifting, while we spied a few character models that still retain a hint of their PS3 and Xbox 360 roots.

The 4K resolution helps too, though this is only available on the PS4 Pro, Xbox One X and PC. The latter will enjoy native 4K, as long as your rig can handle it, along with 2K textures. Even though standard PS4 and Xbox One are capped at a 1080p resolution, it’s promised that they’ll still run at a steady 60fps. That’s 30fps more than the game ever ran during its console debut, which in layman terms means that getting your skull crushed in repeatedly has NEVER felt this smooth.

While the prettier visuals are appreciated, it’s hard to overstate how much better this game feels to play now that it’s twice as responsive. Still, being the pros that we are, we spent a lot of time trying to break the framerate by rolling around any and every room we found, crashing through pots and tables and any other inanimate object that dared look at us funny.

Souls fans rejoice — because the framerate didn’t dip once, even if there were some occasional pauses. Several seconds of the action freezing while the machine caught up with our flagrant disregard for the household items of the residents of Undead Burg.

These pauses were infrequent, but nevertheless, they exist. The version we played is not the release build, and the developers have probably about a month of optimisation before its done and dusted, so fingers crossed these don’t make it into the final product.

Ultimately, they’re far less of a pain than the framedrops experienced by visitors to Blighttown on PS3. Speaking of Blighttown, we took a trip down there (thank you Master Key) to make sure the PS4 Pro didn’t catch fire, and can report that there were once again no frame dips while exploring the later parts of the level. We can also report that the giant mosquitos and venomous blowdart snipers are still incredibly annoying. Are you sure you want to play this game again?

Well, you certainly will when you see the new atmospheric effects in Darkroot Garden and New Londo Ruins. Both of these areas are much improved with what looks like volumetric lighting, making these already harrowing environments look even spookier. More than anything, these two areas sold us on the visual upgrades of the remaster.

But it’s not all visual upgrades. While the base game seemingly hasn’t been touched, making Dark Souls Remastered a great option for new players, there are a couple of quality of life improvements for series veterans returning to the game.

Exploring the options menu revealed a limited amount of possible keybinding changes, allowing you to modify which buttons perform what actions. The best thing about this is the ability to set the jump button to L3, something that is ubiquitous throughout the rest of the Dark Souls series. L3 jumping is vastly superior to the default jump buttons, which requires you to press circle while holding circle to run. It’s an imprecise mess and as far as we’re concerned, it can use its convoluted input method to jump into a fire.

Another improvement which was great to see was the ability to pop multiple souls at once. Souls, for the uninitiated, are the currency of this sadistic series. Not only do you buy weapons, armour and consumables with them, but they’re also used to level up your character. Enemies drop souls, but as you travel through the land of Lordran you’re also going to be finding a lot of soul items. “Hard” souls that you can use to increase your current soul count, but which aren’t dropped at death.

At this point the word “soul” has lost all meaning.

Still, the good news is that you can now use multiple hard souls at once. It’s going to save players a lot of time, instead of having to enter the inventory, find the soul, use the soul, watch the animation, lather, rinse, repeat…

We weren’t able to check during our preview time, but presumably, this is true for ‘humanity’ (another vital consumable) too. If we’re very lucky, covenant offerings will also work in a similar way, shaving at least half an hour off the process of unlocking the Lost Izalith shortcut.

Those are the two main quality of life improvements spotted in the preview build. With only an hour or so of the game played, however, it’s possible there are more we didn’t see.

Expectation weighed heavy on Dark Souls Remastered, with some fans hoping for fixes to big problems with the original game. At this point it’s clear that From Software has not taken the opportunity to improve the experience of Lost Izalith, or make the Bed of Chaos an actual good and/or fun boss fight.

Items and enemies seem to remain in their place, offering no new surprises for veterans. Anything that could be seen to break or change the original game’s experience has been left out, including omni-directional rolling. Both Dark Souls 2 and 3 give the player immense freedom of movement while rolling, but Dark Souls Remastered sticks to its four-directional roots.

Honestly, it’s a wonder 60fps made it in at this rate, since the extra framerate does make gameplay smoother and less sticky than in the original game.

And while it’s a shame that From Software didn’t seize this chance to improve on its masterpiece, it’s perfectly understandable. Dark Souls Remastered is the new normal. The authentic, original experience available for a new audience on new hardware.

Which is what makes the Switch version of the game potentially the most intriguing. Sure, it’s running at a resolution of only 720p in handheld mode (1080p in TV mode) and back to the old school sludgy framerate of 30fps, but the system’s portability could be a game changer. Especially when it comes to multiplayer.

Dark Souls Remastered allows for six-player multiplayer, an increase of the original game’s four-player offering. The potential for the Switch version to offer same-room multiplayer of that level is a very exciting prospect and is something truly new for the franchise.

Portable Dark Souls is going to be a fascinating thing. Instant access for “just one more try” against Ornstein and Smough could potentially be the biggest addition to the game in this otherwise standard remaster.