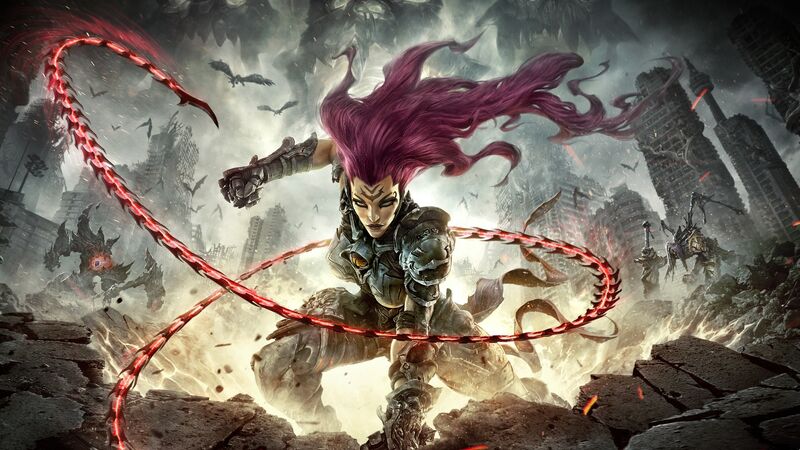 For the longest time, it seemed as if the story of the four horsemen would never be finished, with the beloved Darksiders franchise doomed to stay sealed away in rights holder hell. Fortunately, thanks to the rebirth of THQ and the rise of Gunfire Games (made up of employees who worked at the original Vigil studios) a surprising opportunity to create a true sequel emerged. And yet, something doesn’t feel quite right.

On the surface, Darksiders III ticks all the boxes. Comic book cinematics, battles with angels and demons in post-apocalyptic Earthern wastelands, and Zelda-esque dungeon exploration are all present and correct. But they are brought together by a confused game that has tried to appeal to its core fanbase while taking clear inspiration from Dark Souls and Bayonetta. Yet, unfortunately, Darksiders III fails to truly bottle the magic of either.

LOVE ME TINDER, LOVE ME TRUE

This threequel wastes no time in setting the scene, with a hefty opening sequence introducing players to the straight-talking horseman of the apocoplypse Fury, and her noble steed Rampage. For fans of the franchise, the story here runs parallel to the events of Darksiders II , following War’s betrayal of the Charred Council in triggering the Apocalypse. Unlike fellow horseman Death though, Fury isn’t convinced of War’s intentions and so things are… well, less than rosy between these death-loving deities.

With a rift forming between the horsemen,  the Council task Fury with taking down the Seven Deadly Sins who have begun to wreak their unique brand of havoc on a dying Earth. Once again, the Charred Council team Fury up with a Watcher, a familiar sight for those who played the original Darksiders. The difference this time is that this Watcher isn’t resistant to the job, rather she worships the ground Fury walks on, eager to impress and flatter her with compliments at any given moment.

When it comes to said pulverising, it often feels like Darksiders III is trying to strike a compromise between both of its predecessors. Death’s talent trees have been stripped out and replaced in favour of a more simplified levelling system, facilitated by feeding an NPC called  Vulgrim the souls of defeated enemies. This enables you to level up Fury and offer boosts to her health, strength, or arcane, magical abilities. It’s simplistic, but it works fine in the context of a game that has dropped the heavy-handed cutscenes in favour of getting straight to the action.

As a further nod to the original Darksiders, you can also infuse your weapons with enhancements for various stat boosts. These can be collected in the world during battles and add all kinds of benefits, such as increasing physical and arcane damage with a weapon, damage reduction, and even evasion invincibility windows. Their potency can be increased even further by visiting the imaginatively named ‘the maker’ and giving him special raw materials that pimp your weapons. Once done, it’s up to you to decide whether you opt for angelic or demonic qualities as you customise Fury through her talent trees.

There are of course, a ton of different deadly weapons at your disposal too, with this adventure seeing you wield everything from nun-chucks and hammers to Medieval-esque lances. Along with the aforementioned enhancements, levelling, and of course the Hollow Abilities, these weapons can be used to varying effect. Some weapons and affiliations have to be used together to progress to the next section, but you’ll also find certain combinations are more effective than others against certain enemy types.

It’s all part of the game’s new combat and action system which we found deep enough to keep us invested, nicely striking the balance between a modern progession system for newcomers and something that will appeal to Darksiders veterans.

Speaking of veterans, even old hands at the series will struggle a bit with the game’s difficulty. The early game is deceiving, suggesting Fury can just dive right into the action whipping her way through anything that moves much like War and Death before her. But after a few hour, you’ll notice your approach starts to change. Fury can’t take the same amount of damage as her brothers but mobs will become more aggressive and unrelenting. As their attack behaviour changes, so you’ll resort to picking off individual enemies one by one, dodging at the right moment, then counter punching as opposed to going in for the first strike. This, in turn, will slow down the speed at which you move through each section. Not least because Vulgrim’s plinths, the game’s checkpoint system, are situated further and further apart – ludicrously so, in some cases – and you can’t just save the game any time you like.

The deeper you get into Darksiders III, the more distant combat becomes from its predecessors. Development has definitely favoured the enemy this time around, to the point where the game’s ‘Story’ difficulty — the lowest possible setting — can be too much of a challenge. Darksiders III is brutal, unforgiving, harsh, and often times unfair. Sometimes that’s down to the player and sometimes it’s the fault of the game. Enemies will often get cheap hits in and corner Fury, refusing to let her out. They also seem to hit her from the unlikeliest of positions, and with one hit, can take two thirds of a health bar, leaving Fury dazed and vulnerable afterwards. There’s even occasions where you try to draw in one enemy but a whole army attacks her anyway.

Of course, you can learn enemy behaviour and get better at taking them down. This often boils down to dodging at the right time, using the right weapon type, and picking your strikes. What Gunfire Games have unfortunately not learned from Dark Souls and Bloodbourne, though, is that players can come away from some battles more confused than when they went into it. Sometimes enemies are just going to maul Fury and she’ll endure cheap shot after cheap shot, regularly having to rely on luck as much as skill to get by.

What’s really baffling is just how unbalanced everything feels. When you first fight through a dungeon to tackle a sin, enemies always have the upper hand and should rarely be fought head-on. But once each frustrating sin has been defeated and you return to their old haunt at a later stage, your weapons suddenly slice  foes like a hot knife through butter. This detracts from the game’s leveling system which can show marked improvements in combat over time, but leaves Fury either too strong, or feeling a little bit underpowered compared to her adversaries, rarely an even match or better.

But unlike Dark Souls, there’s no shield to block attacks. Instead, the most effective way to kill an enemy is after a successful evasion attempt. This creates a Witch-Time like slow-down effect ala Bayonetta. The systems complement each other very well and make for a natural fit in Darksiders III. Much like previous games, you have various move sets for each of the weapons, and Fury definitely boasts more than her brothers with more complex combination possibilities. Attacks can also be chained with other weapons and hollow abilities to varying effect. If nothing else, this encourages experimentation in combat more than any other Darksiders game.

Another big change for Darksiders III is the removal of the mini-map. In its place is a Talisman of Sin which adds skulls to the compass at the top of the screen, directing you to your next target. While this made us grumble initially, it’s a change that actually works quite well — despite Darksiders III being a much more open experience than its predecessors. Throughout our playthrough, we never felt particularly lost or confused as to where to go, partly because the terrain felt familiar having played the first Darksiders. In the back of our mind, we always knew where we were and had a good idea how to get somewhere else and were largely able to roam around, blindly following our instincts.

Where Darksiders III really excels, though, is in its foreshadowing, giving players typically tantalising Metroidvania-style glimpses of areas you can’t yet reach. Knowing that a cool-looking area is just beyond the horizon proves to be a surprisingly effective carrot on a stick. Just as you start to get bored with the grind, the sight of somewhere new and shiny gives you enough incentive to grit your teeth and plow through some of the game’s more punishing sections.

As anyone who’s played a Metroidvania will expect, you’ll need the right abilities to gain entry to each new area. Fury can walk through lava, but she will need the Flame Hollow. She can also turn into a morph ball and affix herself to crystal surfaced walls, but — you guessed it — only once you have the Force Hollow.

While the core loop feels fairly predictable, it helps that your protagonist is one you’ll actually come to care about. Fury manages to be a cool, charismatic lead, without feeling smarmy or obnoxious. Her back and forth with the Watcher often brought a smile to our face, but at the same time, we also felt her sense of inner conflict as she becomes more attuned to the struggles on Earth. It’s an arc you’ll have to wait for though, but once the game has splurged the last of its exposition ectoplasm, Darksiders III really finds its stride — and we fond ourselves completely enthralled, eager to see this gothic tale through to its conclusion.

IS DARKSIDERS III ANY GOOD?

Throughout Darksiders III, design choices have been made to simplify the experience as much as possible, though that sometimes comes at the game’s expense. Gunfire Games seemingly wants the story of Darksiders III to be accessible to everyone and have taken all the right steps to make that happen. But frustratingly, poor balancing often gets in the way of the yarn the studio is trying to spin.

It is a good story, though, and you’ll find yourslf invested in the demonic drama that’s unfolding — even if it’s just because you’re excited to see what you can do with all your new toys. While it’s a shame to see the series ditch the alluring wintery aesthetic of Darksiders II ( and lose that rip-roaring Jesper Kidd soundtrack) it’s difficult to complain when no one really expected this game to ever see the light of day.

Ultimately, Darksiders III takes players on a compelling journey that — when it hits its stride– stands shoulder to shoulder with the very best releases this year. Yet, just as the game starts delivering on its lofty potential, unfortunately,  Gunfire Games seems to give you another reason to grumble. If you can look past its woes, there’s a lot to love here — but be prepared for this to be an incredibly frustrating delight.

Ray Willmott
RayWillmott
Ray has written about games for nine years for various gaming outlets and will play just about anything. He even reviewed a Barbie game one time and still has the scar.