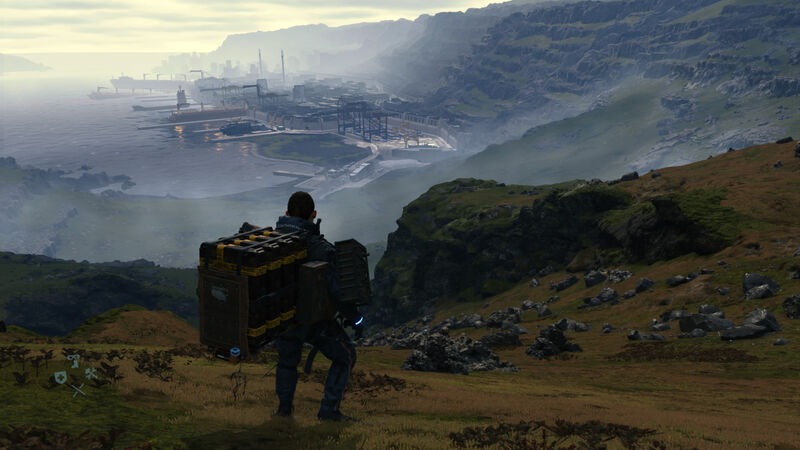 In a World More Divided than Ever, ‘Death Stranding’ Wants to Bring Us Together

Before you’ve even picked up the controller, you’ve probably already decided how you feel about Death Stranding. Whether you’ve been completely put off by its creator’s bore-ish “I Kojima, and I alone made this game” tweets, grown tired of its several-year-long cryptic marketing campaign, or you’re simply clutching your Gray Fox action figure and counting down the seconds until launch  — you already know which camp you’re in.

So, go on then, I hear you sigh. Tell me what I want to know. Is Death Stranding a visionary and exciting new experience that elevates the medium? Or is it simply an overly pretentious and bizarre open world adventure? Well, in truth, it’s a bit of both.

Somehow, Death Stranding manages to be innovative, thought-provoking and one of the most exhausting slogs ever to grace the medium all at once. It features cringe-worthy dialogue by the cargo load, seemingly prides itself on sluggish pacing and is wrapped in enough hamfisted metaphors to make an English teacher wince.

Yet, I can’t stop playing it.

Slow, exhausting and melancholy, you’d be forgiven for thinking that Death Stranding is the antithesis of everything a video game is meant to be. But that’s kind of the point, isn’t it?

Kojima’s already delivered the white knuckle action game – the high concept military epics. Stranding is him and his team turning over a new leaf – and if you want to get the most out of his latest, this time it’s the player who’s going to have to do the heavy lifting.

Kojima Productions‘ debut is a tale of struggle and reward. Terror and tedium. Yet, in a medium that’s prized itself on immediate satisfaction, it’s not difficult to see why even a week before its release, Stranding has managed to divide fans and critics alike.

We’ve all grown to expect certain things from games. Whether its Space Invaders’ giddy gameplay loop that kept kids shoving in quarters back in the ’80s, or World of Warcraft‘s endlessly satisfying busy work pushing you to quest late into the night – the one thing most games share is that they trigger enough of an endorphin release to keep us glued to our monitors.

In Kojima’s post apocalyptic delivery sim, however, these long-standing rules have been chucked out of the window. The truth is, large sections of Death Stranding just simply aren’t fun. At all.

In fact, initially, it feels as though Kojima and co are actively baiting the player. From the second you gain control of Sam Bridges (our Norman Reedus played protagonist) it feels like you’re being bombarded by a ‘greatest hits’ of the worst game mechanics to ever plague the medium.

Hours spent trudging slowly trudging across an open world? Check. Tedious inventory management with the constant fear of being over-encumbered?  Clear and present. A constant array of bizarre fetch quests? You betcha.

Believe it or not, these seemingly terrible mechanics are actually three of the main pillars of Death Stranding’s gameplay. Yet somehow, all this clunkiness culminates in an experience that doesn’t make you want to throw down your controller in disgust. In fact — whisper it — Stranding’s actually all the better for it.

Why? Because it does something that few video games manage – it uses these systems to bring people together. Where many online experiences see you pitted against other players, Stranding uses isolation and desperation to make you truly appreciate what others have left behind.

Put in the shoes of grizzled delivery man, the aforementioned Sam Bridges, you find yourself in a not too distant future where Earth has been ravaged by a cataclysmic event known as The Death Stranding. Thanks to your skills as a porter, it’s up to you to reconnect what’s left of America – by hand.

With the arrival of  horrific ethereal creatures known as BTs and terrorist groups fighting to fill the power vaccum left in the death stranding’s wake, what was once America is largely now a desolate wasteland. Left with few roads and limited resources, it falls to the player to cobble together what they can and help to rebuild this country almost from scratch.

The joy of helping others

Thankfully though, you’re not actually alone. Just like in the real world, when life’s burdens get too much in Death Stranding, Sam can also rely on the wisdom and generosity of others to help lighten the load.

While the Metal Gear series flirted with online elements, Death Stranding is the first Kojima title where having an internet connection is actually crucial to getting the most out of the experience.

Enter the social strand system. While it may sound like a typically Kojima bit of pretentious jargon, in practice, his team’s take on Dark Souls-esque online integration is a breath of fresh air.

With only minimal gear at your disposal and everything from extreme weather, limited resources, ghost-like creatures and terrorist cells trying their best to stop you — a helping hand can mean the difference between success and failure.

With the ability to build structures at your disposal, a well-placed ladder laid by a stranger (who’ll you’ll never actually see) can regularly be the difference between life and death. When your cargo is severely damaged by a flurry of the acid rain-like timefall and your stamina meter is all but depleted, stumbling upon a safe house built by ‘Captaindongs’ turns a brief online encounter into a genuinely memorable moment.

Games are growing up, and that’s worth celebrating

It’s ironic then, that a game which is all about reconnecting a divided world is destined to be, well, so divisive. Just like films, tv, books music and virtually every other artistic medium before it have proved, art doesn’t always have to be fun.

Yet, it’s something that we take for granted with other artforms. Thanks to streaming services ushering in a golden age of TV, we’ve come to expect that television can make us feel uncomfortable. For binging certain series to be a gruelling and psychologically draining experience – and we love them for it.

So why do we expect – and often demand – that video games only provide us with fun?

In the same way that the vast majority of movie goers prefer the immediate gratification of a John Wick over the slow burn of the thematically similiar Joaquin Phoenix’s You Were Never Really Here, it’s fair to say that many Metal Gear fans are going to feel frustrated with  — and let down by — Kojima’s latest.

Despite the huge production values (and its at times jaw-droppingly gorgeous visuals) Stranding is as slow burn as interactive adventures come.

While the pace certainly picks up as protagonist Sam Porter Bridge’s journey unfold – and there are a few moments that  feel incredibly reminiscient of Kojima’s old work – tactical espionage action this is not.

It’s fitting that Kojima’s weirdest work to date is also his most music-heavy. Featuring songs from a wealth of different artists (lead by the hauntingly esoteric Low Roar) it’s often an unexpected cacophony of sound that helps turn the mundane into the beautiful.

Just as your journey threatens to feel like a lonely and insufferable slog, suddenly you’ll find yourself stumbling upon a genuinely stunning vista. As the gorgeously rendered landscape comes into view and the silence of Stranding’s eerily quiet world is broken by an inspiring musical accompaniment, it gives you the motivation you need in order to press on.

In the same way that putting in your headphones can instantly transform a dull commute into a starkly poignant moment in of itself, Death Stranding’s aptly chosen soundtrack adds a lot here.

In fact, it’s not a stretch to think that music could have been Kojima’s true inspiration for much of Death Stranding – as it’s an art form that seems most analogous to where he wants to take gaming. Stick with this analogy for a second, music lovers.

Where over time the Metal Gear series slowly morphed from something akin to a fairly slick-feeling single into a more experimental, but still easily digestible pop song, Death Stranding is the sonic equivalent of Kojima veering into plodding post-rock.

As the story picks up, the cadence of this bizarre game becomes all the less predictable. It’s a game that ebbs and flows. Swells and quiets. Without warning, Stranding’s gameplay and story beats seem to morph from a glorious crescendo…before just as quickly fizzling back to slow-burn ambience. It’s the Explosions in the Sky to MGS’ Linkin Park.

Forming a real connection, or a strand worth shedding?

Ultimately then, whether Stranding is for you depends entirely on what you want from a game. If living the fantasy of swinging around as Spider-Man or murdering slews of zombies is the type of escapism you’re seeking after a hard day’s work, then Death Stranding will probably give you more of a headache than an epiphany.

Yet, whether you’re willing to embrace Kojima’s insanity or not, the fact that a game as weird as this exists — and somehow manages to feel so different from anything else the medium has to offer, too —  is undoubtedly a fact worth celebrating.

Despite all its portable foetuses and other-worldly weirdness, Death Stranding is also a game with a lot to say. In a world where we’re all more connected than ever, but largely use social media simply to divide and deride, there’s something moving about the thought of millions of people trudging through a virtual world where they have no choice but to rely on the kindness of strangers.

While it may ultimately frustrate many unsuspecting Metal Gear fans, for better or worse, this is a game that you won’t soon forget.

As video games grow up and dare to offer more than just fun, for my money, Kojima’s latest suggests that sometimes making a real connection is worth all the struggle.