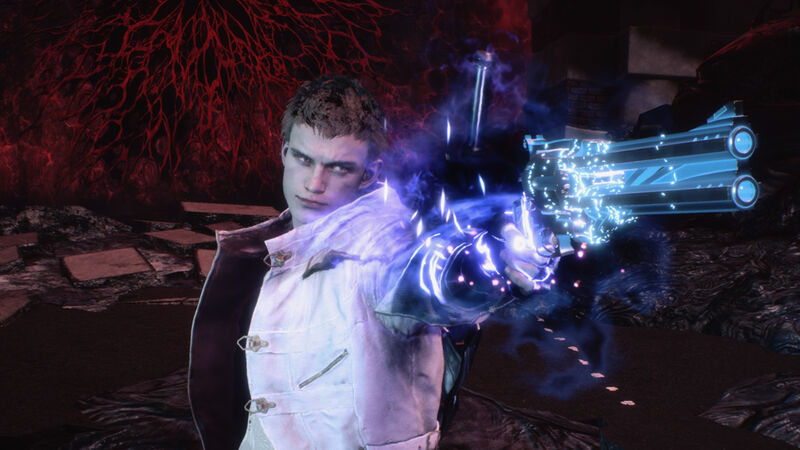 ‘Devil May Cry V’ Review: Better (Than) the Devil You Know

Devil May Cry turned 18 this year. An unwanted kid raised by Capcom, Devil May Cry was forever dressed in the clothes of Onimusha and Resident Evil as it struggled to find its identity. During development, the first game went through so many phases, and shrugged them all off, it’s no surprise that the main protagonist of the series (Dante) ended up this aloof, loner goth, inhabiting a world infested with satanic rituals and hellish manifestations.

The series aged poorly, at first — the sure footing of its youth was undone by the second game (a travesty by all accounts) but thanks to Dante’s charming debut, enough people stuck around to support this fledgling superstar.

Devil May Cry 3 is, to many, the peak of the series’ achievements: it’s mouthy, it’s brash, it’s fast and it’s furious. Then Devil May Cry 4 came along, and though its attitude got a bit more… emo (it was 2008), it fine-tuned the pacing and the design the series had become known for and became yet another fan-favourite.

The series’ awkward teenage years saw Ninja Theory’s cringe-worthy custody of it — complete with a reboot of Dante that really missed the point — land on PS3 and 360 to a mixed reception. Now though, after a few years spent skulking in the shadows plotting its comeback, Devil May Cry is back.

And [Jesus Christ], this is a glow up.

You start with Nero — now ‘armless (no that’s not a pun), the DMC4 protagonist is on a very simple mission: take out the devil prince that stole the demon arm from his human body. This is really all the plot you need to know at this point, and from here on it takes a back seat to the action anyway. There are narrative twists and turns — and revelations galore for the DMC Fanclub — but, let’s be honest, no-one plays character action games for their story.

And this is where Devil May Cry V exceeds. Without a doubt, it’s the best game in the series to date: the series that grew up to be Devil May Cry V has all the right things in its DNA — from the level design creativity of DMC3 to the pacing and cinematic flair of DMC4. From that special take on action and character control in the first game to the fluidity in traversal we got in the reboot.

Even lessons learned in the remasters and re-releases in between have been incorporated — the character variety in this game is beyond impressive. You could have bought any of the three main protagonists in a standalone game and been satisfied — that there’s three of them is, frankly, indulgent.

Nero is probably the best thing that ever happened to Devil May Cry. The youngest of the main cast, he is basically a rushdown character — use your Devil Bringer arm (the robot hand that can be customised to grant time-control debuffs, pierce armoured enemies, grant AoE moves and much more besides) to snatch enemies close to you, use simple physical combos to keep up the pressure, and take potshots with your revolver when you’re at range.

By feeling the rhythm for Nero’s moves, you can start to rev up your sword to modify moves/deal more damage. It’s all about timing: attack, attack, rev. Beat. Attack, rev, dash. Nero is pretty dull until you learn how overpowered a fully revved Red Queen attack makes him, so keep your finger on the right trigger, take advantage of pulls and dashes, and lay down the pressure so nothing can touch you.

Each enemy configuration will force you to mix things up and figure out how to kill opponent A while weakening opponent B. It’s the creativity Capcom shows in mixing enemies together, in different-sized arenas, with different skills forever at your disposal, that floored us with DMCV.

Enter V. He’s the second character you play as, and a total newcomer. To continue the fighting game metaphor, this brooding poetry-loving Adam Driver lookalike uses two familiars to attack: Griffon and Shadow. This makes him a ‘dividual’ character, or a zoner. Using V, you always want to keep distance between you and the front line, holding down the right trigger to power up your Devil Trigger (special meter) whilst laying down pressure from Griffon and Shadow (who you control separately and who have separate life bars).

He’s unlike anything we’ve seen in the series before — inspired by characters like Galford from Samurai Shodown, according to game director Hideaki Itsuno — and serves to break up the pace between the more action-oriented fighters as the game goes on. To be effective as V, you need to concentrate and not just button mash: any bad habits you pick up as Nero, you need to drop with V.

By the time you get to Dante — probably just over halfway through the game — you should have enough tools in your arsenal to really put the game to work. The veteran son of Sparda comes back with his Gunslinger, Royal Guard, Swordmaster and Trickster styles… as well as four melee and five ranged weapons.

So there’s a lot to learn. With Dante, you want to be as aggressive as you are with Nero, but understand that his parry (Royal Guard) is broken: it’s so OP. That’s because the game wants you to learn how to parry enemy attacks and break their guard. Do that, and you’re given a  full bar of Devil Trigger so you can transform into your most dangerous self and ruin enemies in seconds.

Dante feels as satisfying as ever to play, and the hero of all three characters. With a ridiculous new hat that can summon meteors for some reason and a chainsaw sword that chugs through enemies with a grizzly industrial rhythm, Dante is by far the hardest character to master — but the most stylish to play as.

The story cutscenes are finished to a high enough standard that we were still watching them on our third playthrough (honestly, this game looks so good) but it’s the pacing and the level design that stands out here. There’s very little of that asset re-use nonsense that made DMC4 such a slog towards the end, and though the pace stumbles in the final act, your pulse should still be racing enough from the first two-thirds of the game for that to matter.

Devil May Cry V may not have learned from Bayonetta — a series that ran in from left-field and stole its character action crown — but that doesn’t mean DMC is doing it wrong. Many will decry the lack of a dodge button in the game… but DMC doesn’t need it. Dodging and dashing and timing things right so you can parry is all a part of the game’s unique challenge — if you’ve ever played a Bloodborne or a Dark Souls or a Monster Hunter or a Vanquish, this game will speak to you.

Devil May Cry wants to be stylish — it’s the whole point of the game. So if you learn how to play it stylishly — learn the inputs, the hitboxes, the iframes, the charge times, the combos — it rewards you with one of the most fluid action experiences you’re going to get in gaming. You can even see that in the way the ‘ranking meter’ works. Going from D (Dismal) to SSS (Smokin’ Sick Style), the meter ticks up for every perfect dodge you do, every enemy attack you break, every near miss you suffer. It’s like John Woo’s The Matrix on speed and when it’s on a roll it’s nothing short of exhilarating.

This is the best Devil May Cry yet. Each character has enough depth to fill a game by themselves, the story does exactly what it needs to, the twists and turns keep you on edge and the combat sets a new benchmark for action games as a whole. Capcom has made a masterclass in stylish combat gaming here, and there’s enough content to keep players happy — even if it takes another 11 years for a sequel.