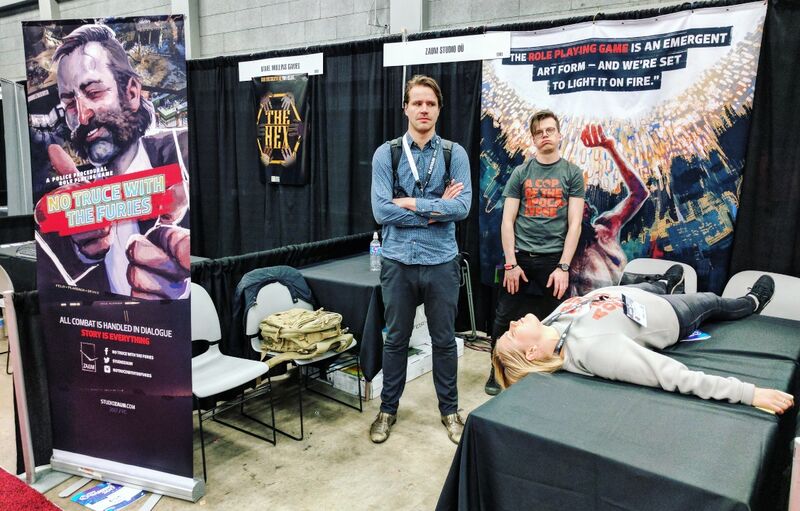 Disco Elysium: How a Few Friends from Estonia Created 2019’s Most Original Game

When asking a BAFTA-winning studio about the impact of ‘97 PS1 classic Final Fantasy VII, the last response I expected was a blunt socio-political statement. Yet, when you’re talking to the creators of 2019’s genre-bending psycho drama Disco Elysium — nothing is ever predictable.

If you’ve been out of the gaming loop for the last 12 months, you’re probably wondering what the hell a Disco Elysium is. Part detective drama about navigating amnesia, part scarily well-written insight into living with intrusive thoughts, ZA/UM’s entrancing debut is both a blast from the past and a refreshing new take on interactive storytelling. In other words, it’s True Detective meets Bukowski… via Baldur’s Gate.

Yet, despite its wonderfully ambitious writing and eyebrow-raising game mechanics, few could have expected a PC-exclusive isometric RPG to clean up at awards ceremonies. Yet, somehow, that’s exactly what happened. And the best part about Disco Elysium’s success? It was made by a group of friends who had no idea what they were doing.

From threats of invasion to creative collaboration

“We started out with a million ideas and zero experience,” reveals the game’s lead writer Helen Hindpere, “Most of us have no proper game design background, so we were woefully unprepared for the challenges of actually making a playable game. This is probably why the development cycle took five long years…”

Growing up in one of the EU’s least populated countries, Estonia, ZA/UM founding members Robert Kurvitz, Aleksander Rostov and Kaur Kender were creatives who always strove to use art to find a way out. Going about their day-to-day lives dealing with constant whisperings of a Russian invasion and even nuclear war, the trio sought solace via nerdy escapism. From playing in local rock bands to writing high-concept steampunk novels, this misfit collection of artists, writers, and musicians were determined to band together and create art that really meant something.

If only, they thought, there was some kind of medium that represented the ‘greatest hits’ of all other artforms — where they could cram their talent for design, music, and the written word into one neat package. It turns out, that holy grail of artforms was right in front of them the whole time — and it was called video games.

Making a game will be easy though, right?

For most Estonians in the 1990s, gaming was a rare luxury. While console sales boomed in Japan and large chunks of the West, Hindpere reveals that the impact that seminal console games like FFVII had in Estonia was simply to remind kids of what they couldn’t have.

“Final Fantasy VII reiterated the poverty of Eastern Europe. Back then only the wealthy few could afford a gaming console — it meant spending money on a device that was designated only for entertainment. This was considered a luxury. Kids back then had access to video games only when someone’s parents brought home a personal computer for work reasons. We used to huddle around these glowing screens and play Fall Out and Planescape Torment. I think this is the secret reason why Eastern Europe is still so enamoured with cRPGs.”

It’s not surprising then, that ZA/UM opted to make an old school inspired computer RPG of their own – but this time, it wouldn’t be set in a medieval fantasy world, but their homeland of Estonia. The question was, where do you begin if you have no actual dev experience? Luckily, these friends found a way to turn abstract knowledge into power.

“Thankfully, we had already done some of the ‘theoretical work’ — if you can call it that. Our art director Aleksander Rostov used to write these incredibly thorough analyses of different game mechanics — but he did it in Estonian — so the audience for that was just us, a few local gaming enthusiasts and… his mum.”

Thanks to the team’s mutual love of creating custom D&D campaigns, they also had something of a head start when it came to laying down their RPG foundations. “We already had the world-building and the Metric system to rely on — both on which we had worked for years before the pre-production for DE even began.”

But, despite sinking countless hours into classic RPGs and having their very own video game scholar on board, none of the team was prepared for the intense undertaking of actually making a video game. Or how much their new labour of love would cost. With one of the studio founders selling his old Ferrari (Hindpere describes Kender as being just as good at capitalism as he is at writing), ZA/UM suddenly had their initial cash injection.

Yet, as the team managed to convince more friends and peers to invest in their game, one question span around their collective heads: what if Disco Elysium was a complete failure?

“During the production cycle, we really had to learn how to manage the fears that the game might flop. There’s even a story of a bankrupt game studio hidden in Disco Elysium, its name a direct hint at the name we first used to introduce us to the world. I guess writing all that into the game was one way for us to manage those fears.”

From niche to newsworthy

After five gruelling years, Disco Elysium has undeniably emerged triumphant. Sitting at an enviable 91 rating on Metacritic, and racking up a cabinet-bothering amount of awards, ZA/UM’s debut has achieved more than its creators ever possibly imagined.

“I’m glad these fears were proven wrong. It feels surreal and humbling. We’re very grateful. We never expected that kind of recognition. It has shown us that creative communication is still possible, that there are people out there who yearn for that kind of connection.”

With recent world events forcing ZA/UM to collect their BAFTAs — a career-defining highlight — online, the studio finds itself more appreciative of awards and award ceremonies than ever.

“I now [also] understand better the ritualistic importance of award shows, and it’s lovely, really. These funny little tokens you get to take home — abstract sculptures, masks, and human figures — are symbols of us being welcomed into the community. It feels like a very long birthday or a coming-of-age ceremony. A perfect end to the turmoil of releasing a game.”

The Power of Procrastination

When playing Disco Elysium, what immediately stands out is just how sharp the writing is. With the player’s options presented on screen through a variety of stream of consciousness dialogue options, protagonist Harrier “Harry” Du Bois’s train of thought often rings alarmingly true. It’s also genuinely funny at times. So, what does ZA/UM credit for this achievement? Procrastination.

“I’m proud that we got to keep our darlings [in the game]. I believe this is one of the reasons why the writing feels so multifaceted, surprising, and rich. A lot of these darlings started out as sort of creative attempts at procrastination — we would all come together and think about the in-game book series ‘Man from Hjelmdall’ when we were tired of writing the actual game – and the obvious thing to do would have been to cut these eclectic and eccentric parts before the release. But I’m proud that we didn’t, even though it added to the workload.”

“From the technical side — I’m proud of the day-and-night cycle. I think people might underestimate how difficult it was to get that in place and yet how important it is in maintaining the sense of reality in the game. “

“Same goes for the weather,” he continues. “ There were long periods where it was always either snowing or raining in the engine as if our protagonist was perpetually trapped in Winter Wonderland or Blade Runner. During the last months of development, everyone in the studio assumed the role of an impromptu weather reporter — we were asked to report on the weather situation of every playthrough, just to get the balance right. In the end, we did get it right, but part of me misses these moody and evocative early playthroughs…

“I feel like the work of our programmers and technical artists is worth mentioning a lot more. Without them, it would be just one million words of text and a few pretty pictures scattered about.”

The future of interactive storytelling

ZA/UM hasn’t exactly been shy about loudly professing their love for TV shows like True Detective and The Wire. Yet Helen, alongside the team, still believes that gaming narratives are being unfairly compared to non-interactive storytelling.

“Ten to fifteen years ago we were asking the same question about TV shows — can they compete with movies? Now the consensus has shifted — it’s clear that the long format of TV series allows us to tell much more complex stories, as evident in The Wire or Succession, fortifying TV as the current powerhouse of writing talent.”

Helen continues, “But the reason behind TV’s success is that the writers took advantage of ways this new medium differed from the old ones — namely, the episodic structure of storytelling, which lets them focus more on character arcs. I’d say the difference between movies and TV is that of a short story and a Balzac novel — but in the end, not even TV can accomplish something *truly* new.”

That is, of course, where ZA/UM believes the power of interactive storytelling comes in. The first thing she believes that games need to do in order to fulfill their true storytelling potential is to stop imitating other mediums.

“Now, where things get interesting, is when we consider the impact the interactive and branching narrative of video games is bound to have on culture,” she says. “I doubt video game writing can achieve its glorious heights if all it ever aims for is to imitate films. Cutscenes play an important role in action-based games — they are there to offer a necessary respite after defeating an enemy — but relying on them to tell a story doesn’t use the potential of video game writing to its full strength. It’s the interactivity and multiplicity of outcomes that really ties the player to the screen and makes them feel involved.”

Helen continues, “Of course, then there’s the provocative question — why do we even need good stories in *games*? Stories are there to provide meaning behind our actions, to illuminate the game mechanics as metaphors. Planescape Torment is perhaps the most obvious example here — tying the save-load cycle of life and death to questions of human nature is ingenious but the same happens in Nier: Automata.

“Without the plot, Nier: Automata would be just a beautiful, but inherently meaningless (soulless, robotic!) experience of smashing buttons — and then in this brilliant flash of creativity, the protagonists of Nier: Automata are pondering the same existential questions, [such as] what’s the meaning behind their automated violence?”

“In Disco Elysium we use resource management to talk about poverty, and passive skill checks to highlight questions of addiction and mental health. I don’t think the story of Disco Elysium could have been told in any other medium with the same conviction.”

For a few poverty-stricken teenagers in Northern Europe, the idea that their love of steampunk and D&D would lead to four BAFTAs, hundreds of thousands of sales and worldwide acclaim was completely laughable. Yet, against all odds four friends with no game development experience have singlehandedly put the Estonian game industry on the map.

Disco Elysium cleaning up at the awards ceremonies isn’t just a win for ZA/UM – it’s a win for the misfits, the underdogs… and more importantly for video games as a whole. Let’s hope that now, Kender and co can not only afford to pick up a copy of FFVII — but that they can buy back that Ferrari, too.