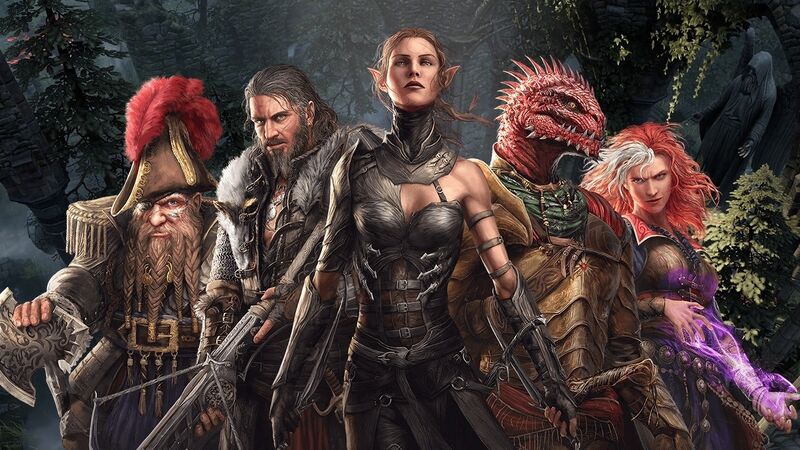 The evening before FANDOM gets its hands on the console version of Larian Studio’s Divinity: Original Sin 2, the highest rated PC RPG of last year no less, we find ourselves standing at a BBQ in the suburbs of Ghent, Belgium. It’s hosted by Larian boss Swen Vincke — and this is his house. He makes an excellent potato salad, by the way. And as drinks are poured and conversation becomes louder, one of Larian’s developers turns to FANDOM and says, excitedly, “the thing with this game, is we just wanted to make something where you could do anything you want…”

At this moment, and you can blame the alcohol if you’d like, having a conversation with a crab pretty much sounds like the coolest gaming moment ever.

From Financial Pain, To Critical Acclaim

The following morning, as we arrive at Larian Studio’s offices, it quickly becomes clear that few studio teams have ever believed in the game they’re working on quite like the 130 people who make up the Larian team. Why? Because this studio owes its very existence to the success of Divinity: Original Sin 2. Despite marking its RPG intentions from the moment the studio opened in 1996 with The Lady, the Mage and the Knight (it was never released, though a tech demo exists online), a series of bad decisions and terrible luck meant that the studio only managed to keep its doors open by churning out a long procession of educational games.

There was upsizing. There was mostly downsizing. At one point the team was just three. But despite the hardships, the light stayed on. Yet Swen didn’t start up Larian Studio’s just to make educational games — he wanted to design the RPG he’d always dreamed of playing. And so came Divinity: Original Sin 2 and with it — the studio’s first true success story.Now, after enjoying critical and commercial success on PC, this acclaimed RPG is finally making its way onto Xbox One and PS4 on August 31st.

“I made my first game when I was twelve-years-old,” says Swen, explaining his route to RPG fandom. “As a kid I was always in the arcades, but then I fell very sick and couldn’t leave the house. I got given a computer and I learned to program. I got an Amiga and I discovered strategy games. Then on my PC I discovered a game called Ultima VI and that changed everything. I was reading loads of fantasy by then, I was really into the Dragonlance novels and Lord Of The Rings.”

“And I discovered Dungeons & Dragons, which I really wanted to play, but I couldn’t find anyone to play it with because I was too nerdy.I realised that if a game like that existed on computers the computer would do the Dungeon Master element for me,” he continues with a smile. “From that point on, I’ve been trying to make a game that replicated how I felt about all those things I loved. Divinity: Original Sin 2 is the closest I’ve got.”

Swen talks about RPG’s with fervour. It’s perhaps telling the game is called ‘Divinity’ — as its a game that enjoys an almost religious degree of reverence. One of the exciting things about the game coming to consoles is that this very special game is about to receive a whole new audience. RPG’s this steeped in lore and personalisation are so often the preserve of PC gaming, there is a certain level of experience implied for someone to approach one.

Yet there’s a hope within Larian that the more action loving quota of console gamers will perhaps have a similar lightbulb moment to what the young Swen Vincke did. The new version is certainly designed with that in mind.

For such a big game, it’s not an intimidating one, and the tutorial system has been completely overhauled since the PC release. It holds your hand, but with a touch that you barely realise. You never ever feel led. Swen enthusiastically tells us that more at Larian is going on than just last-minute tweaks for the console version, that there are other plans and other games in the pipeline – he even closes his until then ajar office door when FANDOM walks past, laughing that “you can’t look in there…”

But from where we’re standing, the whole building feels like it’s chock full of a whole load of clever people focused on nothing but making the best version of Divinity: Original Sin 2 possible.

There’s a host of new additions. It’s silly really. There are more than thirty hours of new play in Act 3. There’s a slurry of new twists and turns in the new story mode, especially for the dwarf, Beast. There are all new battles and fights, and, for fans of lore, there’s a completely rewritten journal. Oh, and it should go without saying that the whole thing looks more beautiful than ever.

But what Swen is most proud of,  is the split screen experience in story mode. He blushes slightly when he says it, but he tells us that Divinity: Original Sin 2 really came about because he wanted to play the game with his wife. He wants friends and partners to have adventures together. It’s like, now he’s found someone to play RPG’s with, he wants to share that gift. He doesn’t want people to play alone.

“When we pitched this game to publishers, way before the PC version was released, there was a pack we gave out,” he says. “On it there were two avatars playing the game together. The hook was that the decisions you made would affect the game your partner was playing. There are common goals for each player, and there are individual goals. The conflict between the two players becomes part of the game. You might say to your partner, ‘I want to kill this guy’ and they might be, like, ‘no, I need him alive’. There’s so much freedom with the game, but with freedom come consequences. I don’t think you can have that kind of freedom outside of a pen and paper RPG, other than in this game.”

Swen talks about how the game’s fanbase shaped many of the changes the console version brings to the table. “I read the forums, even after all these years,” he says, smiling, but also with the vibe of a guy who has seen things. The fanbase is “crucial” to the Divinity series, he says. The changes contained within, are changes the community wanted. The PC version of the game was funded via Kickstarter, Swen admitting that Larian learned somewhere in their recent past that they had so many ideas, so much they wanted to do, so much of an affection for detail, that they couldn’t make a game to a deadline and budget was a struggle too.

Sometimes it helps to own your failings. Yet, there’s so much love from the series fanbase, they met their Kickstarter in hours. All the stretch goals too. Divinity: Original Sin 2 is a game that entered a world that really wanted it. Bizarrely, however, there’s a corner of Larian’s studio that is wall to wall boxes of unclaimed Kickstarter rewards.

“If that’s you, let us know. We keep tripping over them!” says a Larian employee.

We tell Swen that we like where the console version of the game has gone to. One thing though, even after a day’s play, we haven’t found a crab to talk to…

Another laugh. “You have to try explore more”.

And there’s that fervour in his eyes again. Swen Vincke wants you to feel that.