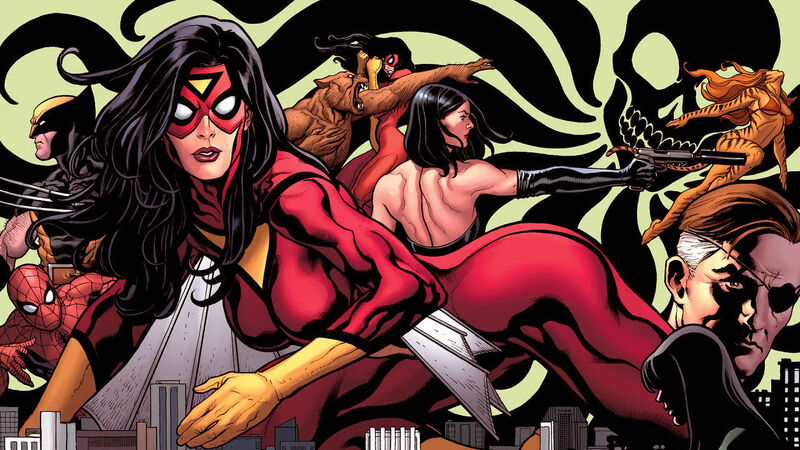 Why Doesn’t Spider-Woman Matter to Marvel?

Spider-Woman first debuted in Marvel Spotlight. That title was ongoing series of one-shots that would either launch new series or see characters slip into oblivion. The book launched Red Wolf, Ghost Rider, Son of Satan, and even Werewolf by Night. Spider-Woman came in right before the series was canceled. Nobody at Marvel thought the character would matter. After all, Marvel executives only pushed for the character so they could maintain a copyright.

Spider-Woman’s original origin had a Sci-Fi horror bent. Spider-Woman would be revealed to be a spider that mutated into a human woman. Archie Goodwin backed away from this origin. This move allowed Marv Wolfman and Marie Severin took more control over the character. Early pioneering Marvel artist Marie Severin based most of Jessica Drew‘s physical appearance after herself. While Goodwin wrote the initial story and didn’t do much to setup the ongoing series, he left a wide open world for later writers. Most of what we know of the character came from the immediate Marv Wolfman retooling following her debut, then Bendis and the Luna Brothers’ later revamp mini Spider-Woman: Origin.

Kiss of the other Spider-Women

Other Marvel superwomen used the Spider-Woman moniker. Most of the 1980s fans tend to remember Julia Carpenter as their era’s Spider-Woman. Even Julia Carpenter didn’t feel necessary. Now, we’ve got Jim Shooter forcing a new Spider-Woman on the world via Secret Wars? Spider-Woman II shuffled off to the X-Villain team Freedom Force and then off to West Coast Avengers. Spider-Woman II got some cartoon screen time in the mid 90’s Iron Man cartoon that aired on UPN. Other than that, nothing. Recently, Marvel has adapted Carpenter into being the new Madame Web.

Mattie Franklin and Charlotte Witter even sported the title for a bit. Plus, who could forget the centerpiece of Secret Invasion with Skrull Empress Veranke impersonating Spider-Woman during most of the series? The point is that it’s really easy to stick a random woman into a role that still lacks major definition. While Carol Danvers got better the end of predominantly male writers sharpening her character, Jessica Drew joins a list of other heroines that feel like clones of clones of clones. That’s not to say that there won’t moments of greatness with Drew. It’s just that nobody could make readers care.

The Rise of Spider-Gwen

What’s more damning than any of this is the rise of the most popular and recent Spider-Woman? Hell, she doesn’t even use the name Spider-Woman. Hailing from an alternate realm in the SpiderVerse, Gwen Stacy rode into our hearts as Spider-Gwen. Tweaking the Spider-Man to a point where Peter became a science misfit and the radioactive spider bit Gwen, the Spider mythos flips on its head. Everything with Spider-Gwen is new and exciting with tweaked characters. The Punisher is a lone wolf cop on her ass, Daredevil is the Kingpin’s lawyer enforcer shaking down her family and Peter has become her world’s version of The Lizard.

Jessica Drew still has landed the most major media time as Spider-Woman. She was the star of a single season animated series in 1979. Plus, she was voiced by Joan Van Ark. Younger readers should ask their parents why that is so cool. Still, the series flopped and extra media time was limited until the late 2000s. The main book eventually was canceled and most of those storylines had to be resolved in the pages of The Avengers. Why couldn’t such a prolific character get any respect?

Well, a lot of it has to do with the character’s origins. Marvel’s executives realized that as their CBS TV properties and other works expanded in Hollywood, bigger studios would be looking to rip them off. In 24 months, Marvel created or was in the process of publishing Spider-Woman, She Hulk, H.E.R.B.I.E., and other loose properties to close the copyright gap. Filmation was prepping a cartoon called Spider-Woman to hit TV screens near the end of 1977. However, there was also a feminist Native American theater group named Spiderwoman Theater, but the threat wasn’t there. Filmation had actively made a career out of media tie-ins to produce cartoons for The Archies, Flash Gordon, and Tarzan. Marvel rushed Spider-Woman into production to beat Filmation’s creation.

What did Marvel do with Spider-Woman?

While Filmation eventually adapted their Spider-Woman into Web Woman. What was Marvel to do with their new creation? The answer was a short-lived series that last about 50 issues and 4 complete tonal changes. The series was famous for introducing X-Force/X-Factor member Siryn and then ending its run on a cliffhanger. Former Spider-Woman editor Roger Stern wrapped up the story with help from Ann Nocenti over in The Avengers. Drew would later help the X-Men when they relocated to San Francisco in between Secret Wars II and The Mutant Massacre.

Longtime Spider-Woman writer/editor Mark Gruenwald tried for a revival of the character in the mid 90’s. While it was looking popular during the immediate Post Clone Saga era, Gruenwald died from a fatal heart attack. Jessica Drew would later mentor the third Spider-Woman, while making a guest appearance alongside Jessica Jones in Alias. From there, Bendis worked her into every aspect of his Avengers run. But, that came to an end.

Finally, we come to the present. Spider-Woman’s new series launched with a very pregnant Jessica Drew preparing to give birth. While she eventually does it on an alien space station, something seemed amiss. Spider-Woman’s friends pestered her about her baby’s father until she finally dropped the hammer. She went to a sperm bank after her last relationship failed. The kid will be raised be her alone and she’s not going to stop working as a super-powered detective. Unfortunately for readers it took about a volume and half, plus two major Marvel events to finally get to this point.

So, why doesn’t Spider-Woman matter to Marvel? Well, it’s because the House of Ideas has a litany of other characters that do the same job. First, the protective super mom and private detective angle is covered by Jessica Jones. In addition, the super powered independent woman angle is handled by Captain Marvel. Finally, the Spider totem thing is handled by (ahem, deep breath) Spider-Man, Spider-Gwen, The Prowler, Arana, Spider-Ham, Miles Morales, Madame Web, Silk, Agent Venom, Spider-Man UK, Spider-Man Noir, etc. There comes a time when it might not be the worst thing to let a character retire. It’s not that Spider-Woman doesn’t matter to Marvel, she’s just not as needed.