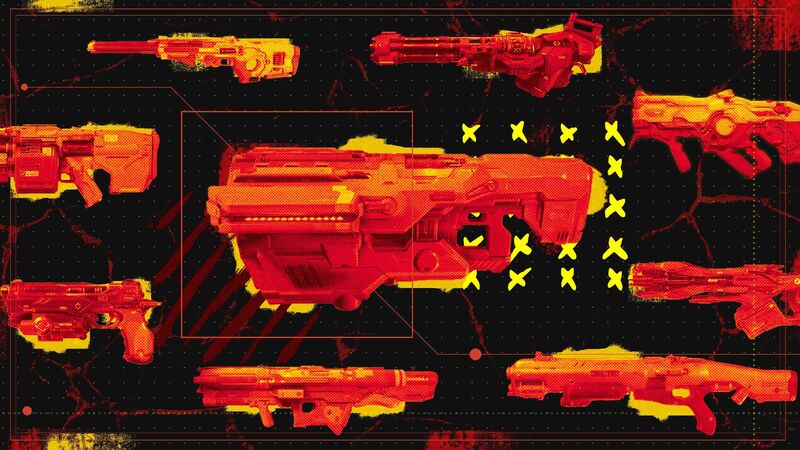 Fictional Weapons are What Makes DOOM Such a Blast

When many people think of shooters, they think of DOOM. From the satisfying pump of its shotgun to the iconic monster designs, DOOM is undoubtedly the daddy of the first person shooter.

Thanks to a timeless artstyle and sound effects so memorable that you can probably hear them while reading this, DOOM quickly became a genre of its own. Yet as the years went on, DOOM’s influence began to wane. Various gaming fads fell in and out of fashion, and although creators id software tried to make their founding franchise relevant, they were unable to recapture the same reverence with the more horror-focused DOOM 3 in 2004.

Scooting off with their tail between their legs, it would be 12 years before they released another DOOM.

In the meantime, other challengers appeared. The noughties saw something of a power vacuum in the genre, with dozens of games competing to replace the now-absent DOOM on the bullet-ridden FPS throne. Medal of Honour had some success emulating Wolfenstein’s World War II setting with more cinematic experiences, Half-Life continued to expand the narrative possibilities of the genre, and Halo found huge acclaim with its sci-fi set pieces and toy-box-like vehicles.

But it was Call of Duty that took DOOM’s crown when Call of Duty 4: Modern Warfare released in 2007, with the annual franchise becoming the shooter for over a decade. And while its reign seems to be finally coming to an end, no one can deny that COD has completely reshaped the landscape of the shooter. Why? Because of its guns.

The arsenal you had at your display in DOOM was a little meagre but pleasingly unique: the shotgun, the plasma rifle, the rocket launcher. Call of Duty, however, went for a more grounded military dressing.

In COD, players had several assault rifles, and multiple shotguns, each named with proper military jargon and all of them familiar to anyone had seen an action film or news coverage. In fact, worryingly for many, they were often licensed versions of real weapons that could be actually held and fired, or at least designed to look and sound close enough that it would be hard to tell the difference.

Still, for gamers, when it came to virtual pew pews, it seemed like it was definitely ‘better the devil you know’. These ‘realistic’ weapons, much like regenerating health, soon became a staple of the genre, with most shooters making sure to include some form of the world’s most famous firearms for players to wield.

It became so common and widespread that even popular games outside of the first person shooter — and designed specifically for a younger audience such as Fortnite — included weapons akin to the AK-47 and the FAMAS. Won’t somebody think of the children?

So, when DOOM returned in 2016 with a soft reboot and a reimagined story, there was every opportunity for the developers at id software to continue the trend and arm the Doomslayer with all manner of real of realistic military hardware.

But thankfully, they didn’t.

Wisely, DOOM 2016, and the upcoming DOOM Eternal, have a similarly fantastical range of weaponry to what players were wielding back in 1993. But that’s not to say that the Doomslayers’ arsenal is lacking, he has over a dozen weapons in DOOM 2016 and its safe to assume a similar number in Eternal. But apart from the shotgun and the super shotgun which already have extremely different uses, each gun is completely unique, and has its own place in the armoury.

One reason that DOOM is able to do this is because it tossed aside the two weapon slot design that was also popularised in its absence. Instead of having to adapt your playstyle to the weapons you’re currently wielding, DOOM 2016 and DOOM Eternal allow you to draw whichever weapon you want, whenever you want it.

This means that you don’t need to constantly search for a dozen slightly different-looking shotguns when you’ve already got your most trusted one to hand. You won’t be picking between twenty extremely similar-feeling weapons as you fight the legions of hell — just a few awesome ones.

Taking a quick glance at the weapon list in the latest DOOM games, and you might be forgiven for thinking that a lot of firearms might be the same as those found in the strange corridors of DOOM 1993. But oh boy are they not. The plasma gun for instance, has made several changes since it was first introduced in the original DOOM, but these changes have been made in isolation, unaffected by the whims of the shooter genre at large.

The first plasma gun’s design was based on a toy gun, but in 2016 it became something more alien, highlighting its futuristic ammo. More than just its aesthetic, the way the gun operates has changed, without ever losing what made it a plasma gun in the first place.

In the original game the plasma rifle was an effective boss killer, slowing enemies down and dealing incredible damage while it did so, but in 2016, when the focus of the gunplay changed from singular goliath like enemies to mobs and epic battles, the plasma was retooled and became an effective instrument against spawns of low health enemies, without much effect on the bigger bosses.

But despite this, it stills feels unequivocally like a DOOM plasma cannon, with its stream of projectiles and close range focus. It wasn’t moulded into somehing more generic, that felt more conventional and familiar to our world.

When Medal of Honour chased the fame of Call of Duty into modern theatres of war, it didn’t do well. There were arguably a lot of reasons for this, but one of them was that it simply lost its identity trying to emulate Call of Duty. DOOM is not making that mistake, and its identity doesn’t just come from its infernal enemies. The weapons of DOOM are a huge part of the character of the game, and preserving them keeps DOOM separate from the dower military slogs the shooter can become synonymous with.

Because while Call of Duty and Tom Clancy games might be a lot of fun, they’ve got a lot of baggage to carry when they use weapons we can recognise from the real world. Baggage that would easily weigh down the Doomslayer and his uncontroversial, demon slaying antics. Sometimes Tom Clancy games feel like a weapon showroom rather than a video game with an incredible breakdown of each of the weapons parts and statistics that you can tinker with.

And Call of Duty’s tendency to elevate American military interventionism and demonise the global south can make it even more difficult to overlook the tools you’re using to do that. The weapons in DOOM are familiar but entirely unmoored from our reality and their real-life uses. When you’re slaying down hordes of demons and watching their giblets reign down from the sky, you do so guilt-free.

We can’t really not talk about the BFG now, can we? The BFG is DOOM’s most famous weapon, a gigantic sci-fi monstrosity that through the series has been able to glib more or else anything you point it at. More powerful than the plasma rifle, the BFG is the ultimate demon-slaying tool and the epitome of DOOM’s arsenal, capable of clearing entire rooms with a single discharge.

Its influence is still felt today in other games that have tried to emulate the gleeful destruction of BFG in their own way. Fallout for instance had the Fatman, and even Call of Duty had the AC-130. But all of these tools of destruction suffer from the same issue, they are dressed in military fatigues.

For all of the humour in Fallout, the use of nuclear weapons is still hard to hard to parse in our world, let alone one that was already annihilated by them. And while its fun to rain death from above, the cold unfeeling narration of the crew of the AC-130 makes the whole experience worryingly dehumanised.

The BFG, on the other hand, is only vaguely related to our world through Roald Dahl and, er, its still quite difficult to get the two mixed up.

DOOM was the breakthrough first person shooter. Sure, it might not have created the genre, but it damn well defined it. And now it is here again, resurrected from the darkest depths of the 90s and surrounded by shooters that have become so far removed from what DOOM helped create. And while its influence can still be felt across shooters in everything from the way you explore the levels to the kind of weapons you can use, it has not allowed itself to be influenced by others.

In some ways, there’s something wholesome about DOOM Eternal‘s entirely fictional, OTT bloodshed. It is like a time capsule buried before the po-faced Call of Duty became the genre-leader, or even an artefact from an alternate timeline. DOOM Eternal lets players gleefully fulfil their power fantasies without sacrificing arcadey fun or steeping them in military jargon.

It keeps its own identity through by overtop weapons and how they operate and doesn’t stoop to anyone for it. in other words, it succeeds because it just unashamedly embraces what it is — a video game.