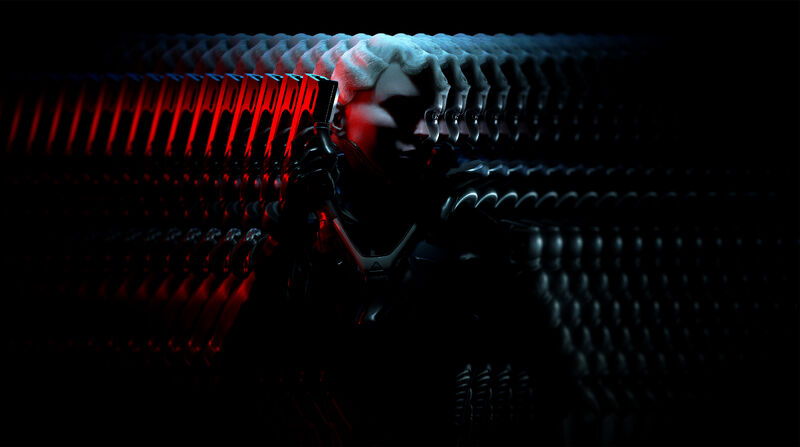 Thanks to the additional horsepower of modern consoles, gamers can now escape to increasingly visually stunning and expansive worlds. Yet, despite these bigger and prettier virtual playgrounds, there’s one core aspect of modern game design that’s been lagging behind the rapidly improving graphics: The AI that inhabits these worlds.

With recent titles like Ghost Recon Wildlands featuring sprawling locales populated by opponents that wouldn’t feel out of place in a PS2 game, it often feels like who we encounter in these environments is low down on developers’ priorities.

Thankfully, one small indie studio from Copenhagen is determined to bring AI back to the forefront of game design. Formed by eight developers who cut their teeth at Hitman developer IO interactive, Ultra Ultra is a studio that’s no stranger to AI. With the Hitman series famous for its web of intricately connected enemy loops, for the studio’s debut game – Echo— Ultra Ultra has opted to take that AI-focused gameplay and add a refreshing twist.

“I think AI’s main task in most games is just to be believable,” says Ultra Ultra founder and game director, Martin Emborg with a shake of the head. “It isn’t really being actively pursued as a game feature. We want to change that.”

In this sci-fi themed stealth game, players are tasked with exploring a mysterious AI-controlled palace that watches their every move. As the game takes you deeper into its eerily abandoned passages and elaborately decorated hallways, you soon discover an almost infinite number of AI apparitions waiting for you.

The twist? These disturbing robots look identical to the player’s avatar. If that wasn’t bad enough, thanks to the ever watchful eye of the palace, these replicas slowly begin to mimic your actions too, learning from your every move as you explore the perilous palace.

While this may sound like little more than a gimmick, Echo’s core gameplay loop is actually as alluring as it is terrifying. Every time you enter a new area, your disturbing doppelgangers are initially fairly harmless as you scout out the room before you. While they can grab you if you get too close, they can only walk very slowly, lacking any kind of ranged weaponry or an understanding of how doors work. You’d almost feel sorry for the dopey bots, if they weren’t watching intently, waiting for you to slip up.

Where Hitman sees players carefully analysing AI behaviour patterns in order to blend in, Echo flips that on its head, as this time it’s the game that’s analysing your actions. With the palace lights on, everything you do can be learned by Echo’s attentive AI, meaning that if you fire a gun, sprint, vault or use a door – you’ll teach those vital skills to the surrounding robots.

Luckily for players, time hasn’t been kind to the ancient palace, with overgrown wiring causing frequent power cuts, leaving players free to cause mayhem under the cover of darkness.

Despite launching at the end of last year, Echo is a game that was criminally ignored by the vast majority of gamers. It’s a game where each subsequent playthrough left me with something I rarely get from games anymore, the feeling that I’d experienced something genuinely new.

Developing such a strong idea and making it look and feel so impressive is a lofty feat for any studio – let alone one made up of just eight people.

Thanks to the skills of the team and Unreal Engine 4 not costing the studio a penny, Ultra Ultra has managed to build a AAA-quality game with fewer people than your average publisher’s PR department – and it’s only taken them two years.

Leading the young Danish studio is power couple Martin Emborg and Christel Graabæk who worked together at IO Interactive, then had two kids, and now have opened their very own game studio. For game director and CEO Emborg, 10 years at IO had him itching to create a game on his own terms.

“I think there is this sense at some point when it’s now or never,” he explains. “Either act, or be happy where you are and stay there.” With the duo’s impressive resume counting everything from Kanye and Lynch to last year’s Hitman the couple’s love for sci-fi and wild ideas got them a bit of a reputation as IO Interactive’s dreamers.

“I was always pitching stuff at IO and trying to veer them into the fantastical,” says Emborg.“ I said we should do something with robots, or whatever … I think I got quite a reputation for talking about robots all the time at IO. I think we wanted to make something that is beyond what is just gritty realism, which is very much the IO brand.”

“We’ve always had ideas for projects in our heads, but they were meant for AAA, like big, big teams,” agrees scriptwriter and producer Christel Graabæk. “Echo was a little different: we saw that we had something that was a bit more contained. A smaller idea that we could actually create.”

It was this drive to develop something genuinely different that led to the duo founding Ultra Ultra. Once they dreamt up the idea of a game where the AI learns from the player, they realized they were on to a winner. With Echo’s intriguing concept proving too tantalising for their friends at IO to ignore, the duo slowly managed to convince their colleagues to jump ship.

While Echo is undeniably its own beast, the game’s third-person stealth mechanics undoubtedly bear some similarities to the team’s past. Yet, thanks to the game’s unique setting and tone, Echo feels a world away from the grounded killing sprees of IO’s world-conquering Hitman franchise.

Waking aboard an abandoned spaceship after many years of cryosleep, the game begins with Echo’s protagonist finding herself in an eerie and ominous-looking future. The opening left me just as confused as the game’s protagonist, but Emborg and Graabæk reassured me that there will be an extended introduction, allowing players to really connect with the protagonist before you make your way to the palace and dive into the action.

“[Echo’s introduction] comes from really liking games like Dear Esther,” reveals Emborg. “They were called walking simulators, which I think is a really derivative name for them as what they did was actually quite special. You get to experience a universe in a different way than you can in a movie or in a book. So what we wanted to do here was to have something along those lines, where you get to immerse yourself into the universe without being attacked. Getting to be there and wondering about it, having the time to do that … before it evolves into something else.”

Following a brief bit of backstory, I skipped ahead into the palace to begin the more action-heavy part of the game. What snippets I did get of Echo’s story showed a narrative that was cryptic and intriguing, hinting at a studio that wasn’t afraid to test its audience. “People are smart, but they’ve grown to expect a game where the story kind of sucks, and that’s sad,” Emborg says with a sigh.

This is something that as lead writer, Graabæk couldn’t agree with more. “Having a narrow audience, hopefully we’ll get a core that really likes this … but we don’t need to sell seven million copies to get our money back. We don’t have to make sure that everyone understands everything all the way through, so we have set the bar for the story a little higher.”Graabæk pauses and smiles. “We expect you to piece it together.”

While Ultra Ultra was lucky enough to secure some funding from the Danish Film Institute, making a game isn’t cheap, and that money pool quickly ran dry.

Unsurprisingly, the studio’s survival depends entirely on Echo’s success, which has driven the team to work incredibly long hours to achieve their vision.

“It is a very ambitious title to make with eight people. I mean, we can just about make it work but we haven’t seen our kids as much as we would like,” says Emborg.

“There are those experiences that stay with you. I can’t eat chicken without thinking of [the Cronenberg film] Existenz because of the gun they made out of chicken. I really hope that Echo will become one of those unforgettable things.”

Thanks to its unique take on AI, Echo certainly won’t be a gaming experience I’ll forget anytime soon. Echo is out now on Steam, PS4 and PS4 Pro.