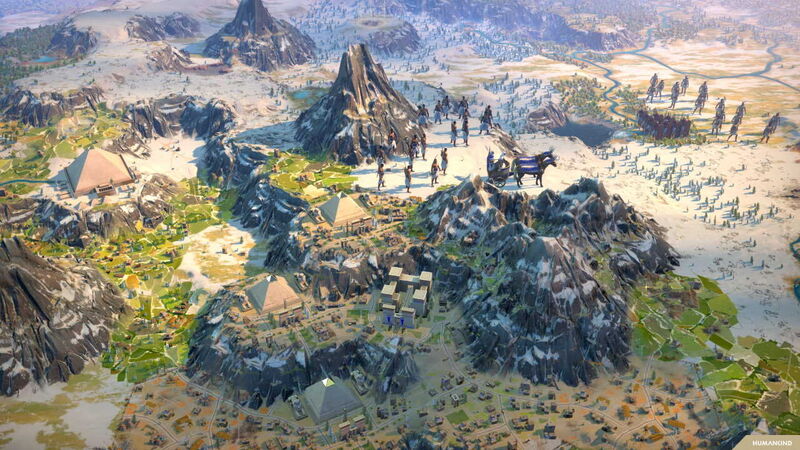 Everything We Know So Far About ‘HUMANKIND’

Games like Sins of a Solar Empire STILL have a decent player base and following to this very day. Now, another game has came along to try and capture the love and attention of 4X gamers. That game is HUMANKIND.

Here, we take a look at everything you need to know about the upcoming strategy game.

So… Tell me about HUMANKIND.

Well, HUMANKIND first began in the stone age, bashing rocks together and trying to create fire—oh you meant the game, didn’t you? Right.

HUMANKIND is a game created as a historical 4X game. Think a Civilization-type game and you’re on the right track.

Developed by Amplitude, the game was announced in 2019 for Steam, the Epic Games Store and Google Stadia, and was originally supposed to release on April 22nd. However, after receiving feedback from initial playtests, Amplitude decided to delay the game to August 17th.

So is this just Civilization? Is there any room for creativity?

Well, yes and no. The game obviously takes a lot of influence and gameplay pointers from Civilization, given how Civilization is at the forefront of the genre, but HUMANKIND takes a different approach. They don’t just make a pretty game and stop there, they put an emphasis on being able to adapt to a situation (like the human race does).

It focuses on showing the multi-cultural history of humanity, and how we change and evolve over the years. In terms of creativity, players will be able to modify everything including the AI, in case there’s something you want to try.

There’s also a character creator, akin to what you would find in a traditional RPG, complete with sliders and numbers to change to your hearts content.

Wait, multi-cultural history? Does that mean we’ll be playing through different eras of history, like in Civilization?

It does! There are six different eras in HUMANKIND, and each era has ten different cultures you can choose from to play as in the next era. Each has unique traits and habits, and it’s strategically important to choose wisely. So across history you can choose from cultures such as Libyans, Nubians, Egyptians, Germans, Babylonians, Hittites and the Chinese. That’s just a tiny sliver of what is available in the final game, with the final game offering up 60 different cultures.

Are there any other cool features I should know about?

So, Amplitude has spoken about how the cities you build and create in HUMANKIND will actively change over time. They’ll become more modern representations of themselves as time passes, but some will be what Amplitude has referred to as “emblematic quarters” which are historical remnants.

What this means is that sections of your city and world will look noticeably older than other sections. There’s also a noticeable focus on fame over winning. As the head of Amplitude, Romain de Waubert de Genlis, stated “You can’t win history, that’s not what happens.”

So in this vein, the purpose of the character you create, the one I mentioned earlier, is to make them famous. These can range in type, from beating enemies to building cities and making your citizens happy.

Speaking of character creation, your Avatar can be created by you. Therefore, if you wish to make them in your mould, or your favorite celebrities, you can do as there’s a plethora of customization options for you to choose from.

In order to actually “beat” an era, you need to get seven stars (representations of your character’s fame).

When it comes to combat, there are a few options that players will encounter. Battles will occur when your army encounters an enemy force, turning that section of the world map into a marked-out battlefield—known as a Tactical Map. Both sides will be able to deploy units within this battlefield section, and can even move more units in to help allies… but be sure to research the Organized Warfare technology in order to do this!

Sieges take place outside yours and your enemy’s cities. When in sieges, the city in question will see its Trade Routes broken and positive statuses removed—as well as not allowing the defender’s army in or out of the city during the siege.

You do! If you pre-order HUMANKINDyou receive three avatar sets and player icons (Boudicca, Lucy and Edgar Allen Poe). Plus, if you purchase the Digital Deluxe Edition of the game you get a copy of the soundtrack, the HUMANKIND Notre-Dame Pack and a PDF poster of the Unit & Tech Tree.