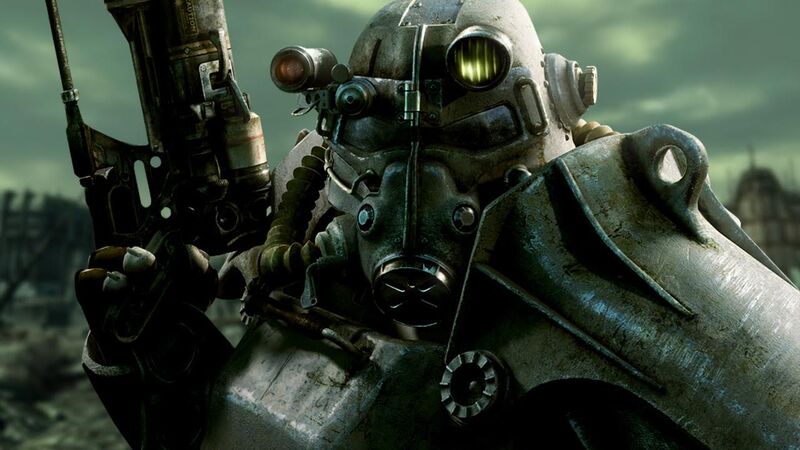 If you’ve ever moved away from the town in which you grew up, you’ll know that returning home can be an emotional experience. Human beings change as we age — we wrinkle, our hair falls out, and if you’re especially unlucky, your ears become massive. What’s up with that? But your town largely stays the same. Bricks and mortar don’t age like we do. Sure, a shop or two might rebrand, but unless you live in Godzilla’s hood, chances are the same buildings, the same streets, and consequently, the same memories, will all still exist.

Returning to the Capital Wasteland 10 years on is a similar emotional experience. Bethesda’s first Fallout game, the third in the series and the first in first-person, was a seismic title in the lives of pretty much everyone who played games in 2008. It’s a game that took over players’ lives. I distinctly remember thinking that I’d rather play Fallout 3 than do pretty much anything else for a huge segment of 2008. You didn’t just play their way through the Capital Wasteland, the decimated post-apocalyptic remains of Washington, D.C. in the year 2274. You lived in it. It was your home.

Movie Magic in the Wasteland

Heading back a decade on, and putting aside the irritation of still not being able to skip the (on a first-time play, excellent; afterwards, not so much) handholding first hour, the sense of awe, and of wonder I felt the first time I left Vault 101, remains intact. It’s that moment when your eyes ache, seeing natural light for the first time. When you know the only way is forward. When you know you’re out of the cage and actually living now. With the possible exception of Red Dead Redemption, I don’t think I’ve ever felt as free within a game, so drunk on possibilities, as I have playing Fallout 3.

Sure, the graphics feel a bit washed out, but then, for all the games ambition, they always did to some extent; heck, even the next-gen Fallout 4 felt a bit like it’d been hit with the ugly stick. It’s still buggy too. Not like it was, but the occasional Brahmin will still sometimes spiral into the sky. And it’s a shame — though also amusing at this point — how Bethesda still haven’t learned how to animate a human face. But these are cockles on the hull of a cruiser.

We gamers talk a lot about our medium being spoken about with the same reverence that films are spoken about. Truth is though, under oath, when it comes to storytelling and narrative, how many games can we really say are worthy of that? The Last Of Us? It’s great, but it’s not a million miles better than a really good episode of The Walking Dead. GTA V? It’s excellent, but while Rockstar might think they’ve made The Wire: The Game, it’s much closer to Hill Street Blues. The frustrating thing about all of this is that it’s only a matter of time. But not yet. Fallout 3? An adventure into a retro-futuristic world, dripping with lore, stitched together with intrigue. That might be the only time a game has ever really come close.

The Real Story Is the Quests We Completed Along the Way

Heading to Megaton for the first time in a decade, a place I had blown-up, not blown-up, then blown-up, many times over, I instantly remembered the richness of Fallout 3’s story. How much I wanted to explore everything this supersized shantytown had to offer. For better or worse, we all muck about in binary sandboxes now, but few games have managed to stitch together a primary storyline with hundreds of branched side-quests like Fallout 3 did a decade ago.

Running across the Wasteland, you always felt like every ghoul you met, every super mutant, every mercenary had a role to play in the world, beyond just standing in the way between you and your objective of obtaining a nice cup of water. And, even if their faces looked a bit like a mouldy piece of peach, the stories of those you met along the way, almost always resonated.

Think of the first time Lucy West sent you to check in on her family in Arefu. Mediating between The Mechanist and the AntAgonizer. Liberty Prime. The unease you felt upon learning Andale’s terrible secret. Getting hooked up to Vault 112’s matrix. The search for Agatha’s Soil Stradivarius. Every batshit conversation you ever had with Moira Brown. Robotic Button Gwinnett. The uneasy refuge of Oasis. The Replicated Man story, which is essentially a tale worthy of its own game, within a game. All of these stories were smartly written, many of them were very funny, some of them were actually frightening. All poised moral quandaries that shaped the game, forcing actions that felt significant — and not just a way to level-up.

No Game Can Please Everyone, Not Even Fallout 3

On release, Fallout 3 received almost universal acclaim — as of 2015, the game is said to have sold 12.4 million copies — though not everyone was happy. Fans of the first two games, created by the late Interplay Entertainment Corp. were distinctly unimpressed by what had happened after Bethesda had secured the rights to take the series on. In hindsight, it’s hard not to feel sympathy for their displeasure. Aesthetically, Fallout 3 has nothing to do with its predecessors. Tonally, it’s some distance from them too. Basically, Bethesda took a beloved franchise and made it something else.

“It’s not a Fallout game,” raged Vince D. Weller at the time, via the longstanding Fallout fansite No Mutants Allowed. “It’s not even a game inspired by Fallout, as I had hoped. It’s a game that contains a loose assortment of familiar Fallout concepts and names… Electricity, pre-war electronic equipment, powered and still working computers (just think about that for a second), working cola & snack machines, weapons, ammo, scrap metal (needed by many), and even unlooted first aid boxes are everywhere.”

Vince has a point, but it’s hard to begrudge a shift that gave so much to pleasure to so many. What Bethesda did with Fallout 3, was recognise an intriguing world, then grow it — in the process, creating an experience that will remain with those who invested in it forever.

The Best Mechanics Manifest in the Real World

They say you can’t halt progress. The first time you played Fallout 3 — the first time you got kitted out in power armor! — is one of those seismic pop-culture experiences that we’ll all spend the rest of our lives trying to replicate for the first time again. It’s little exaggeration to say that it’s akin to the first time you saw Star Wars. The night before the Battlestar Galactica finale. The cinema queue to see Lord of the Rings. We all know games are made up of numbers. Fallout 3 made you believe actual magic was involved.

I don’t think I’ve ever told anyone this, so consider yourselves lucky. I played so much Fallout 3 in 2008 that I couldn’t go into a shop, get the bus, or have a night in the pub without — for months –thinking about what every person might look like in V.A.T.S.

Revisiting Fallout 3 10 years on makes me think that I’m going to start getting loads of uneasy looks from bus drivers again. It’s a problem I’m willing to face.