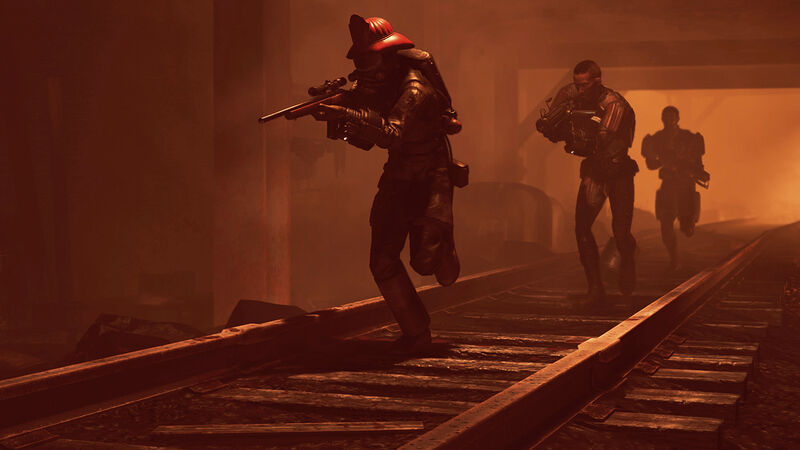 Whenever a new Fallout game finally comes around, it’s a bit of an event. Unlike predictable annual mainstays like Call Of Duty and NBA 2K, Bethesda’s acclaimed post-apocalyptic RPG series flits in and out of our lives as it pleases. Unsurprisingly then, the announcement of Fallout ’76 at this year’s E3 turned its fair share of heads – but this time, it wasn’t necessarily for the right reasons.

When game director Todd Howard bounded on stage in his trademark ‘business dude’ blazer and tee, he looked poised to finally reveal the mainline Fallout successor that fans had been itching for. As his presentation went on, however, it quickly became clear that — as online rumours had suggested — Bethesda’s latest wasn’t Fallout 5 at all, but a multiplayer, survival-sim spin-off. And, well… the reveal didn’t go down well. Moments after the news broke, the internet was flooded with comments from angry fans, lamenting Bethesda’s new shift in direction. But now that we’ve had a chance to play it, was the online backlash warranted?

After spending three hours with the game at an event (and pouring several more into its beta and the final game), it turns out it’s not really change that fans should be concerned about with Fallout ’76 – it’s the lack of it. Despite the 76 monicker giving Bethesda room to try and do things a little differently, so far, this is a game that looks to plays less like the intriguing new online spin-off Howard alluded to, and more like Fallout 4.5.

For die-hard fans, more of the same definitely won’t be a problem. In fact, the series’ tried and tested core gameplay loop of exploring, looting and shooting is still as solid as ever — and it’s hard to complain about now being able to bring three friends along for the ride.

Yet, thanks to Fallout 4’s aging engine and some extremely familiar-feeling gameplay, 76 plays far closer to a generous standalone online mode than a brand-new, full-priced RPG. Interestingly though, there is one aspect of 76 that could transform it into an online roleplaying experience that feels truly unique – its complete lack of NPCs.

Surprisingly, 76‘s main storyline is delivered entirely through audio logs and text files, dropping 4’s more cinematic-led approach for a creepier, Everybody’s-Gone-to-the-Rapture-esque abandoned world. You read that correctly, there’s not a single human NPC  wandering this nuked-up wasteland. Yet, with players able to trade with one another, voice chat with strangers in close proximity and even build and group their settlements together, you could, in theory, stumble upon an entirely player-made town.

A New Role to Play

With Fallout 76 set just a decade after the blast went off, this eerily-abandoned world makes every player-to-player interaction feel even more poignant. Imagine spending hours running across a barren and corpse-littered West Virginia, only irradiated skeletons and gun-toting mutants for company, before wearily discovering a bustling, sheltered town – alive with the sound of real, human voices.

In some ways, this is a game that can be seen as fairly basic and Bethesda’s recent warnings of it being bug-city doesn’t exactly inspire confidence, yet there’s something exciting about the possibilities that 76 offers. Thanks to its systems, Bethesda’s upcoming RPG could be one of the few online games to leave an ocean-sized gap for players to tell their own stories. With only audio logs and pre-recorded voice tracks telling the official narrative, the rest of what happens in this pre-Brotherhood wasteland could well lie in the community’s hands.

With private servers coming down the line too, ‘76’s user-run ‘worlds’ are simply brimming with true roleplay possibilities. Imagine rolling a character on a completely peaceful The Sims-esque zone where you have to find a profession to fit into the nuked-up neighbourhood. Yet, this kind of roleplaying isn’t just going to be confined to users’ own private little playgrounds — Bethesda hopes that it could even bleed into the main game, too.

“We’re hoping that [roleplaying] comes out even on the [main servers],” says design director, Emil Pagilarulo. “We have enough tools within the camp and with the outfits that you can have people starting to roleplay different…personas and stuff. It’s entirely possible and it’s what we hope [will happen]. When we get beyond the first three hours and people are playing long term, I can imagine people building little camps next to each other and forming little communities.”

Thanks to the game’s clever PVP system, players can choose whether they feel like engaging with individual troublemakers – or to even opt out of multiplayer shenanigans entirely. This means that in theory, if you wanted to spend a day completely ignoring the game’s violent side and being a shopkeeper instead, you can. In fact, Bethesda is waiting to see how much players want to band together, with Pagilarulo explaining that they’re strongly considering adding guild-like features post-launch.

While the trailers and footage sell you the dream of shooting up mutants with your mates, thanks to the game’s extensive building and trading tools, there’s real potential for Fallout 76 to evolve into a complex and refreshingly unique online role-playing game. And with Red Dead Redemption 2‘s likely all-consuming online beta dropping around the same time as 76 hits the shelves, a deeper, weirder online experience is exactly what Bethesda needs to keep players immersed in its latest wasteland.