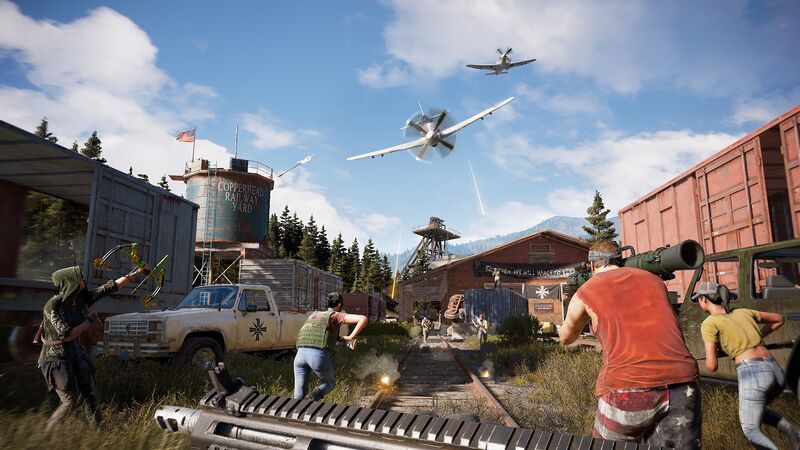 Moving away from exotic, war-torn locales like Nepal and Africa, Far Cry 5 instead sends players to a somehow even more controversial setting – Montana. For the franchise’s fifth outing, the action takes place in the fictional region of Hope County. Thanks to rising global tensions and a wide spread desire to return to ‘simpler times’, a twisted, populist preacher named Joseph Seed has quietly seized control of the region. Stop us if this all sounds a bit too on the nose.

With Seed’s fanatical subsect of Christianity – Eden’s Gate — seeking to ‘save’ Hope County from sin (largely by drowning and torturing its terrified residents), Far Cry 5’s chilling premise is one that immediately intrigues.

Yet, after Far Cry 4’s cookie-cutter outposts made disappointing use of its unique Nepalese setting, we were sceptical whether Hope County would actually live up to its chilling potential. Thankfully, after spending two hours exploring Montana and battling more deranged cultists then you can shake a Bible at, it looks like Ubisoft’s latest might actually live up to its interesting premise.

Roaming across this disarmingly quiet-looking county, your goal is to liberate the entire region in the time-honoured Ubisoft way – by riddling everything with bullets. Yet, despite Far Cry 5 following a pretty familiar-feeling formula, there’s a genuinely palatable sense of tension at play here.

As rays of sunshine beat down on Montana’s idyllic-looking countryside, it’s easy to forget that there’s always a very real threat of danger lurking around the corner. With Eden’s Gate seizing control of the roads and most major towns, a quick drive down the wrong intersection or ill-advised stroll can suddenly trigger all-out war.

It’s (not) Pointless To Resist

In Far Cry 5, Resistance Points are the key to restoring normality to Hope County. These can be earned by defeating Eden’s Gate VIPs, undertaking missions from needy NPCs and rescuing terrified civilians. Given free reign over three large sections of the map, we decided to step away from the main missions and explore as much of the region as we could.

Over the course of our time with in Montana, it became apparent that this new setting has really energised the team to push the usual Ubi open world template. Instead of a largely empty map filled with the same old Ubisoft open world tenants, Hope County felt like a genuinely exciting place to explore. Whether we roamed Montana by foot, car or plane, we’d constantly stumble on a wide range of varied and exciting things to do.

A big reason for this is that side missions seem to have been given a lot more thought this time around. Whether it’s exploring a burnt out building to find a hidden bunker, or having to shoot off a faraway lock adorning a riverside cabin, each new diversion felt enjoyable and surprisingly in-keeping with the game’s premise.

It’s this brilliant contrast between Montana’s glorious-looking scenery and the harrowing violence left in Seed’s wake that makes Far Cry 5 feel so compelling. With the state’s inhabitants having holed themselves up in increasingly well-hidden places, stumbling upon the bodies of their murdered occupants feels genuinely quite affecting.

Even more impressively, Ubisoft Montreal has managed to solve a problem that has always been a massive bug bear for many gamers: inaccessible buildings. In Hope County, almost every door you encounter can be opened. Whether it’s a farm door that gently creaks as you push into it, or a shop front that needs a key before you can steal its wares, there’re a surprising amount of different buildings waiting to be explored.

On our two-hour demo, we made our way through countless shacks, houses and garages, each littered with enough carefully considered flourishes to make it feel like they had been hastily abandoned.

Despite Hope County being an intriguing place to visit alone, for many, Far Cry 5  will be all about murdering cultists with a companion. Whether you’re finishing off fanatics with the help of AI pals like Boomer or cleaning up Montana with a friend online, a bit of assistance goes a long way. When it comes to adding an AI to your squad, players can choose from a plethora of different NPCs, known as Guns For Hire. After earning their trust by helping them out on various missions, you can befriend Guns like the plane-riding Nick Rye or the hardened sniper, Grace Armstrong.

The only trade off is that in coop, the game loses a bit of its brilliantly foreboding atmosphere. Still, if you fancy a break from the bleak and want to engage in some open world shenanigans, it looks like there’ll be a lot of fun to be had in Hope County with a friend.

Thanks to its unique premise and surprisingly ambitious world, Far Cry 5 is shaping up to be the series’ most tense and atmospheric open-world adventure yet.  With what we’ve seen so far managing to retain the series’ great gunplay while injecting it with a level of personality that gives Watch Dogs 2 a run for its money, we can’t wait to see what else Hope County has to offer.

Let’s just hope that Ubisoft Montreal can keep up this level of mission variety and attentional to detail over the course of the whole campaign.