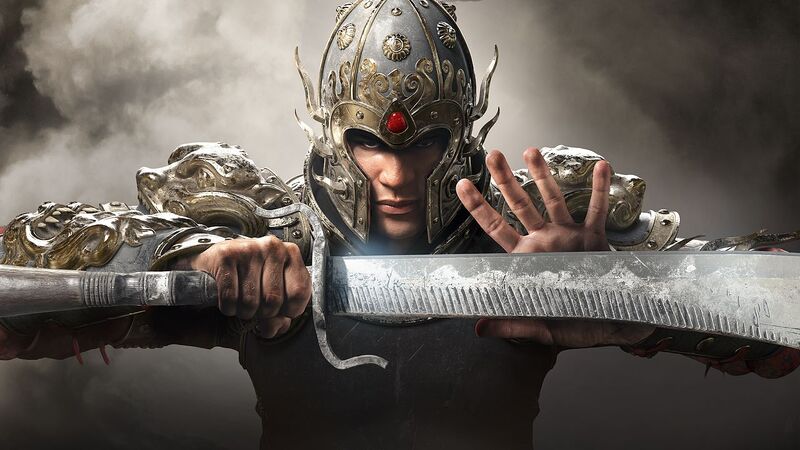 Ubisoft’s For Honor is one of the rarest things in the gaming world – something that’s genuinely unique. Blending MOBA tendencies with the intricacy of a fighting game, this multiplayer melee brawler sees three factions of warriors drawn from distinct periods of history engaging in an eternal battle to seize control of ever-shifting territory. It’s also a game that’s criminally underplayed.

Since it launched in 2017, it’s overcome early matchmaking and server issues to emerge as a solid favorite amongst a small (but faithful) core of competitive players. Now, however, a year later, Ubisoft is hoping to give For Honor another push with a new expansion.

For hardcore fans of the game, the main draw of the upcoming Marching Fire expansion is going to be the addition of a fourth faction to the game, with Three Kingdoms era Chinese combatants joining the existing Knights, Vikings, and Samurai. It’s going to be a major change for the game’s overall balance (and will likely help improve For Honor’s appeal in real-world China) but it won’t be the only big shift the expansion delivers.

It also massively increases the amount of single player and co-operative content in the game with a brand new Arcade Mode. Having gone hands-on with the feature – and the Three Kingdoms warriors – it feels like this new update is exactly what the game has been missing.

The Campaign mode currently in For Honor, while fairly hefty, only really serves to onboard players to the multiplayer modes by training them in the various aspects of the combat system. Arcade Mode, in contrast, delivers a dedicated PVE experience to the game for the first time, with story-driven quests that expand For Honor’s lore. Playable solo or with a friend online, the new mode takes you through several battles each time you play, often presenting modified rules or introducing handicaps to really test your skills.

Each quest is randomised, with the number of chapters to battle through dependent on difficulty. A typical quest will be a meagre four battles, jumping to six in a row for Legendary class. Rare, Heroic, and Epic quests fit in between, and the rewards you earn will increase as you escalate the challenge. For multiplayer gamers, it’s nice to see that playing solo won’t be a waste of their time. Much like questing in Destiny, any progress made in For Honor‘s Arcade mode carries over to the PVP side of the game too, allowing you to improve your favourite characters before taking on the world. As an extra incentive to invest some time in the solo side, doing so will also unlock exclusive cosmetic items, including ornaments, outfits, and effects. If you’re that way inclined.

As with the core game, you’ll choose your preferred fighter from the existing hero types – Vanguard, Heavies, Assassin, or Hybrid – based on your preferred playstyle. I experimented with the Tiandi, the Chinese faction’s Vanguard, and Nuxia, a hybrid leaning more towards Assassin in terms of speed and accuracy. From these two at least, the Chinese faction feels more fluid than the three existing armies, with a blend of speedy wushu swordplay and balletic movement, all wrapped in a veneer of wuxia heroism.

A Story worth Murdering For?

The narrative of the quests we’ve seen so far are fairly minimal but still enjoyable enough. Perhaps the closest comparison is how SoulCalibur presents each character’s personal plotline, fostering a deeper understanding of the part they play in the wider world. For Honor in Arcade Mode has a similar feel – the plot of each quest is delivered on text screens between each battle, describing situations, characters, and locations, all of which gives these mini-adventures an important role in wider world building.

Playing through several sessions, one quest saw me having to defeat a group of bandits who had overrun a village, another extinguishing a legion of demonically corrupted burning soldiers, and the final served up battles against key enemies with hordes of minions. Battles tend to take place on smaller stages, emphasising the intimacy of each encounter and forcing you to think about your surroundings as you block, parry, and attack your foe. They’re also still focused on one-on-one or one-on-two conflicts, although opponents with minions tend to complicate matters by threatening to overwhelm. Arcade Mode’s grunts are usually felled with a single attack though, as in Campaign or multiplayer.

Disappointingly though, there are no changes to the combat system as part of the expansion. As devoted players will now, you’ll still attack or block by striking up, diagonally bottom-left, or diagonally bottom-right, have to read your opponent’s moves to counter them, all while managing your stamina to unleash your fury. Yet combat still feels as wonderfully deep as it did on launch. Once you’ve mastered the game’s more advanced techniques you can break enemies’ guard, or even deflect blows from multiple attackers at once.

What really makes Arcade Mode’s encounters stand out though, is the aforementioned modifiers. These are essentially buffs and debuffs for either you or your enemy, and can dramatically alter how fights play out. A handful I encountered included needing to avoid traps or throw opponents into them, or catching fire when battling the burning soldiers and having to defeat their general before burning up. Another chapter started with my health low and with a bleeding state inflicted. Dispatching minions would provide restore health while I took out the main enemy warrior, but with only four of the grunts to use as a health boost, the real challenge was balancing resources to survive.

Many of the chapters on a quest play out in this way; real-time puzzles to solve mid-battle. There are also so many potential modifiers, story fragments, enemies, and challenges to be remixed into quests that Ubisoft rather confidently claims that Arcade Mode will offer “infinite battle scenarios”.

Still, despite being quite content-rich, arguably the best aspect of Arcade Mode is actually that it’s short and self-contained. Even a six-battle Legendary quest will take no more than 10-15 minutes, so it’s perfect for when you don’t have time to invest in a full-length territory squabble in multiplayer. By boosting the possibilities of the game for solo players, Ubisoft seems to have really rounded out the package of what For Honor offers. Is Marching Fire a massive The Taken King style revamp? Not even close. But when the core game is this much fun, sometimes just a bit more content is all that’s really needed.