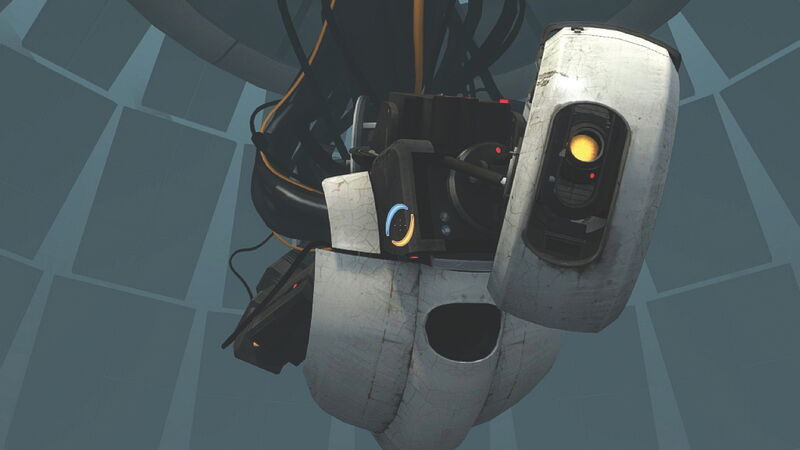 Why GLaDOS is the Ultimate Gaming Villain

From the dawn of time, villains have been a fundamental part of storytelling. Villains provide the heroes with a challenge: to defeat them. And there is no better place for villains to thrive than within video games, in which you—the player—are the hero. But only the best video game villains live forever in our hearts and minds. And no one takes the cake (get it?) like GLaDOS. So in honor of Portal 2’s 10th anniversary, we’ll be diving into the maniacal mechanical mind of gaming’s greatest villain—GLaDOS.

What Makes a Good Villain?

Alfred Hitchcock once said, “The more successful the villain, the more successful the picture.” I believe we can apply this mindset to video games as well. Think about your favorite video game villains for a moment: Andrew Ryan, Sephiroth, Pyramid Head, and Handsome Jack are probably just a few that came to your mind. Each of those villains hails from critically acclaimed games. But what makes a great villain? Specifically: the best video game villain? I’ve narrowed it down to four key features:

There are undoubtedly other facets you can add to the above list, but for now, we’re going to leave it at these four key features. So now that we have our parameters down, it’s time to focus on the AI of the hour: GLaDOS.

GLaDOS, the Genetic Lifeform and Disk Operating System, is an AI that runs Aperture Science. Throughout Portal, GLaDOS puts Chell (aka the player) through many “tests” that can only be solved with the Aperture Science Portal Gun. As these puzzles progress, GLaDOS’ demeanor begins to change as well. What once appeared to be pre-programmed AI statements slowly morph into sinister remarks directed at the player. After several “malfunctions” and dangerous situations, you finally reach the final test room and cake chamber—only to be promptly thrown into the incinerator. Once you escape, that is where GLaDOS reveals her true colors. She begins to lie about wanting to kill you, begging you to return to the testing area. GLaDOS tries a variety of tactics to persuade the player from continuing forward: convincing you that she’s on your side, insulting your intelligence, and even using turrets to finish the job. But in the final confrontation, GLaDOS’s true nature becomes clear: she is a super-powered AI hellbent on testing (and, if not, murder), and you are just too crafty for her taste.

And this wrathful robot proves that she doesn’t go down easy. After you defeat her at the end of Portal, guess who is “Still Alive” and awaiting your return in Portal 2? In this sequel, GLaDOS has cut the BS and is just straight-up sinister with you. Once you and Wheatley wake her, the literal first thing she says to you is:

“Oh… It’s you. It’s been a long time. How have you been? I’ve been really busy being dead. You know, after you MURDERED ME. Okay. Look. We both said a lot of things that you’re going to regret. But I think we can put our differences behind us. For science. You monster. I will say, though, that since you went to all the trouble of waking me up, you must really, really love to test. I love it too. There’s just one small thing we need to take care of first.”

She promptly throws you down a hatch into the Aperture Science testing facilities, and you’re back at square (or Portal) one. Throughout the rest of the game, GLaDOS exercises a lot more aggression and sarcasm towards the player. However, this slowly starts to change after Wheatley takes control, and you and GLaDOS are sent careening into the underground of Aperture.

One of the most memorable parts of Portal 2 is discovering the old Aperture Science testing facilities under the current one. Here, we meet Cave Johnson and his assistant, Caroline, via prerecorded audio logs. While Caroline does not have a ton of lines in this part of the game, we understand her significance simply by the way Cave speaks about her: “She’s the backbone of this facility. Pretty as a postcard, too. Sorry, fellas. She’s married. To science.” As you continue throughout this chapter and witness the changes to Aperture Science, it’s hard not to miss the changes to Cave. The once positive man becomes hardened by time and illness. One of Cave’s final lines in the game is:

“I will say this—and I’m gonna say it on tape so everybody hears it a hundred times a day: If I die before you people can pour me into a computer, I want Caroline to run this place. Now she’ll argue. She’ll say she can’t. She’s modest like that. But you make her. Hell, put her in my computer. I don’t care.”

As Chell and GLaDOS explore the time capsule-esque levels of the old facility, GLaDOS makes more and more remarks regarding the familiarity of Caroline. When you first stumble upon the portrait of Cave and Caroline, GLaDOS remarks, “Those people, in the portrait. They look so familiar…” and later in one of the testing facilities, “Caroline… why do I know this woman? Did I kill her? Or-” As the player focuses on the physics puzzles in front of them, GLaDOS is faced with the Caroline puzzle to solve.

After this chapter, more instances in the game nod to Caroline being a part of GLaDOS. With this information, one can only assume the tragedy that befell Caroline. Her mind ripped from herself and placed into an artificial intelligence. The Valve team already had a great villain with GLaDOS after the first Portal game. But fleshing out her backstory, making this terrifying test-based AI human, adds a whole new dimension to the character. As the player and GLaDOS work together to take down Wheatley, GLaDOS becomes warmer towards you—the test subject she’s tried to kill countless times. Is GLaDOS becoming your friend? Or are these the kind elements of Caroline’s mind coming through GLaDOS’s programming? Portal 2 keeps this ambiguous, and I’m glad they did. This ambiguity adds a level of complexity to GLaDOS and makes her, well, more human.

So now that we’ve covered GLaDOS’s history, let’s talk about her design. When the user enters GLaDOS’ chamber at the end of Portal, that is when we get our first good look at her construction. GLaDOS is a mechanical fixture hanging from the ceiling through cables and contraptions. In Portal 2, she receives a slightly updated design that gives her the trademark rectangular face and single yellow light that many associate with GLaDOS today. GLaDOS’ unique range of mobility is something that sets her apart as well. In other games, AIs often appear as large, stationary computer fixtures (like Mr. House in Fallout: New Vegas). When taking her down in Portal, GLaDOS eerily pivots and swings back and forth from her fixture in the ceiling. Similarly, in Portal 2, she receives a lot more physicality. Her curved form takes on more snake-like movement, and she even cocks her robotic head in a human manner.

GLaDOS’s color scheme also plays into what we know about her character as well. From the outside, she is a streamlined black and white machine. This could symbolize her AI tendencies to see only the good and bad data of the world (frequently bad enough for neurotoxin). However, she does get some color added to her via the addition of the Personality Cores. These cores, specifically the Morality Core, are fixtures added to GLaDOS to reduce her murderous tendencies. The more color that appears on her, the more human aspects she takes on. Players can specifically notice this once they remove her Morality Core and GLaDOS’ voice immediately becomes a terrifying monotone. And don’t even get me started on GLaDOS’ stunning potato battery bod in Portal 2. Name me one other villain that can pull off potato like she can? GLaDOS has one of the most memorable villain designs in gaming history, which is why this eerie AI sticks with us to this day.

The CORE of it All

So now that we’ve discussed GLaDOS at length, it’s time to revisit the question posed at the beginning of the piece: What makes the best video games villain, or rather, what makes GLaDOS the best? Let’s start with Motivation. GLaDOS is an AI whose sole mission is to execute tests and ensure that Aperture Science is better than Black Mesa. This motivation stems from her AI programming and the fact that Caroline (the mind behind GLaDOS) was put in charge of the company by Cave Johnson upon his passing. Perhaps the Caroline side of GLaDOS also feels the need to test, ensuring that Cave’s legacy lives on and that it wasn’t for nothing. GLaDOS will stop at nothing to test, learn, and discard the pesky humans in her way.

I think we can all agree that GLaDOS exemplifies the Power + Obstacles factor. She is an incredibly commanding AI that can manipulate the entire facility to her whim. This allows her to modify tests, command turrets, and yes, even set up a fake room with cake in the incinerator to try and kill you. With great power comes great testing, and possibly great loneliness.

With that, we look into GLaDOS’ Backstory. If it wasn’t for Portal 2, this section would honesty be a lot smaller. We get some semblance of what (and who) GLaDOS is in the first game, but it is Portal 2 that makes her a tragic character. If you search online, you can find cut audio logs of Caroline’s voice actor (Ellen McLain) that hint at Caroline pleading for something not to happen: “Mr Johnson, I don’t want this.” Many fans have concluded that this refers to Caroline’s mind being forced into the AI program that later becomes GLaDOS. This backstory makes GLaDOS an even more complex character than just a powerful murderous AI. Behind that cold mechanical exterior is the last great mind of Aperture Science.

And finally, the Creativity behind GLaDOS speaks for itself. Her sleek monochrome design is instantly recognizable. Likewise, her snarky personality makes her quotable and a stand-out among other AI characters. You can honestly feel the love and hard work that went into making GLaDOS not only a fun villain, but a fleshed-out one in Portal 2.

The Portal series is more or less a physics puzzle game. But what has made these games stand the test of time? Simple—it’s GLaDOS. GLaDOS adds stakes, hilarity, and refreshing engagement, keeping Portal from feeling boring or repetitive. Additionally, GLaDOS provides a terrifying presence for gamers. We never know what puzzles or traps she has planned for us in the next room. You’d think that a big-budget, AAA open-world story game would guarantee the best villain in gaming. Valve proved to us that isn’t the case. All you need for the best villain is an unforgettable aesthetic, a brilliant mind, and perhaps, some cake.