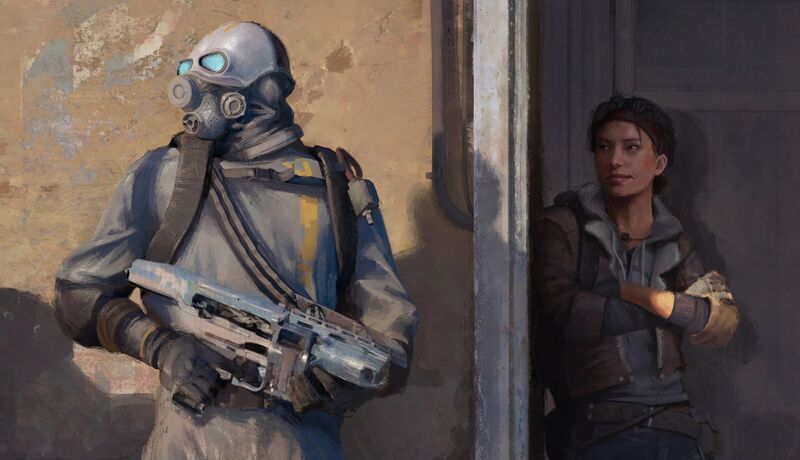 How ‘Half-Life: Alyx’ Fits into the Series’ Timeline

Half-Life: Alyx is out in two months. A new Half-Life game? Wow! Exciting stuff! Finally going to resolve that ending!

Not so fast, bucko!

In 2007, Valve ended Half-Life 2: Episode Two on a powerful note. After successfully defending the human base at White Forest from an all-out Combine attack, the Resistance launched a rocket into space, shutting off the conquering force’s superportal and stranding them on Earth. But, the victory turned out to be pyrrhic.

Just as protagonist Gordon Freeman and his companion Alyx Vance were about to take off in search of Dr. Judith Mossman , a pair of Advisors — mysterious aliens speculated to be the master race of the Combine species — burst in, jacked in to Resistance leader Eli Vance ’s brain and killed him. Alyx cried and cradled her father’s dead body as the game faded to credits.

A shocking cliffhanger, followed by 12 years of nothing.

Originally, the Half-Life 2 episodes were planned to release as a trilogy. But, Episode 3, initially announced for a December 2007 release, never materialized . Now, we’re getting something else entirely. In Half-Life: Alyx, it doesn’t appear that Valve will continue Half-Life 2’s story at all. Rather, this new VR chapter looks to mine the unexplored space between Half-Life and Half-Life 2.

The Half-Life saga kicks off with physicist Gordon Freeman participating in an experiment at government research facility Black Mesa that causes a “resonance cascade.” That strange phenomenon opens a portal to the alien borderworld, Xen. After travelling to Xen and defeating the Nihilanth — the creature whose power sustained the portal — Gordon meets the G-Man. This mysterious interdimensional being places Gordon in stasis, where he remains — untouched by time — for 20 years.

At the beginning of Half-Life 2, the G-Man removed Gordon from stasis and placed him on a tram to City 17 , a sprawling dystopian metropolis and the headquarters for the Combine’s rule on Earth. Here, Gordon joins the Resistance, led by Eli Vance, a scientist who worked with Gordon at Black Mesa, and his daughter, Alyx.

Half-Life: Alyx will explore the time between these two games. Here’s how Valve’s official Half-Life website describes the set-up for the game:

“The loss of the Seven-Hour War is still fresh. In the shadow of a rising Combine fortress known as the Citadel, residents of City 17 learn to live under the rule of their invaders. But among this scattered population are two of Earth’s most resourceful scientists: Dr. Eli Vance and his daughter Alyx, the founders of a fledgling resistance.

You and your father were relocated to City 17. In the years since, you’ve continued your clandestine scientific activity—performing critical research, and building invaluable tools for the few humans brave enough to defy the Combine.

Every day you learn more about your enemy, and every day you work toward finding a weakness.”

So far, Valve has only given us a small peak at the cast of characters who will appear in this game. Alyx is, obviously, back in the starring role and the announcement trailer reintroduced us to Eli, who looks substantially younger than in the Half-Life 2 games. Alyx will be aided in her mission by a new character, voiced by Rhys Darby , who chucks her a loaded gun in the trailer.

Additionally, it seems likely that Half-Life: Alyx will mark the return of Barney Calhoun — though, so far, that hasn’t been confirmed. Barney Calhoun was a college student working as a security guard during the Black Mesa incident. In Half-Life: Blue Shift, a Gearbox-developed add-on to Half-Life, players assumed the role of Calhoun as he attempted to escape the Black Mesa facility.

In Half-Life 2 and its episodes, Calhoun has become a key figure in the Resistance. It’s probable that Calhoun will make an appearance in Half-Life: Alyx. Likewise, Isaac Kleiner and Arne Magnusson , former Black Mesa scientists who became key figures in the Resistance following the Seven Hour War, will likely appear.

But, perhaps most importantly, the G-Man has some part to play in Half-Life: Alyx. The trailer ends on a glimpse of the up-rezzed interdimensional bureaucrat. For fans looking for plot threads connecting the new entry to Episode Two’s cliffhanger, the G-Man is your best bet. Hopefully Half-Life: Alyx can provide some new insight into the G-Man’s relationship with Eli.

The aging scientist never speaks the G-Man’s name but, when during a conversation with Gordon, refers to the G-Man as their “mutual friend.” Additionally, after Alyx’s near-death experience in Episode Two, we find out that the G-Man rescued her during the events at Black Mesa. Half-Life: Alyx will likely give us a better understanding of the G-Man’s relationship with the Vances.

As a result of its place in the Half-Life timeline, Half-Life: Alyx has the opportunity to answer some lingering questions about the formation of Earth’s Resistance movement. When Gordon arrives on the scene, the faction is already established, with outposts in City 17, White Forest and along the coast. Its key figures — mostly scientists — are in place. But, Half-Life: Alyx has the stated goal of showing us how that confederation coalesces.

In the trailer, it is revealed that Eli Vance has been apprehended by the Combine. But, will we get a glimpse of his relationship with Alyx before his capture? Will we see the pair recruiting scientists in a bid to form a Combine-fighting coalition? Will we see how the Vortigaunts went from Xen slaves and shotgun-fodder to friends of the Freeman? What about how Barney Calhoun ascend from looked-down on security guard to Resistance leader? And, Alyx’s relationship with the G-Man? What’s going on with that? And why does Alyx still look like she’s in her twenties in Half-Life 2 despite also looking like she’s in her twenties over a decade before in Half-Life: Alyx? Only time will tell.

So, while we still eagerly anticipate a sequel that ties up the loose ends left by Half-Life 2: Episode Two, Half-Life: Alyx is exploring a fascinating time period in the series’ lore. While Gordon Freeman is out of the picture, Alyx has the potential to tell the interesting story of Earth’s most highly educated group of ragtag rebels.