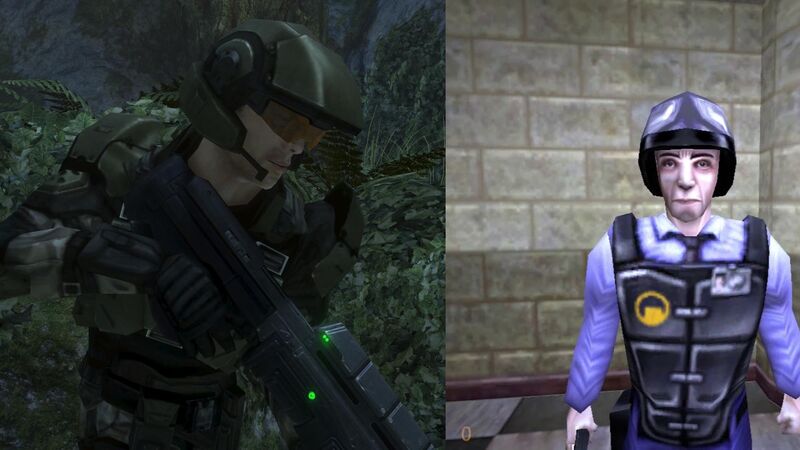 Even in space, the voices are mostly American. The culture and language of the US Marine Corps has survived centuries of change and light-years of travel so that, during the events of Halo: Combat Evolved, you can hear a man say ‘oo-rah’ while standing on the ring of an alien superweapon so large that rivers run along its surface.

In that context, a singular accent stands out like a beacon. Chips Dubbo, as he would later be known, appears to be the only Australian stationed on the Pillar of Autumn. Once you’ve noticed him, he’s hard to ignore, thanks to his psychotic enthusiasm for the fight. “Hey mate,” he yells at Master Chief, the UNSC’s most decorated soldier. “That was mine, you stole my kill. Get your own, I saw him first.”

Chips’ confidence is ill-founded. While the marines on Halo’s battlefields tend to hit their targets and cooperate well to bring down large enemies, they’re deeply vulnerable. They don’t have access to the recharging shield that keeps the Chief alive, nor can they pick up the health packs that punctuate levels.

Once low on health, they turn berserk, advancing on the nearest enemy with fingers glued to triggers. They are designed to die – contributing a sense of jeopardy to scenarios which are often last-ditch and desperate. In character, their most obvious inspiration are the marines in James Cameron’s Aliens, destined to be picked off one by one. Game over, man. Game over.

Yet just like Bill Paxton’s Private Hudson, Halo’s marines have lived long in the imagination of fans, made endearing by their bravura spirit. Moreover, their very vulnerability makes them more than just set dressing – for many, the marines became cubs to protect, a reason to charge the enemy and draw their fire.

In a typical videogame escort mission, you’re given no real responsibility. So long as you reach the end, the survival of your ward is immutable. That’s not so in Halo, which doesn’t even note the passing of your AI friends. Missions finish just the same whether a marine squad pulls through with a full complement or is cut to pieces. That indifference breeds a contrary compassion in players, who will reload saves to see their brittle companions through the fray.

You can see the same effect at work in early Call of Duty, which played up its contrast to the heroic solo shooters that had come before. ‘In the war that changed the world,’ ran its tagline, ‘no one fought alone’. The first two games randomly generated names for the squaddies who accompanied you into burning French villages and Russian ruins, quietly encouraging you to keep track of them.

Fallen comrades were quickly replaced with new ones, but when a familiar surname stopped appearing in the periphery of your screen, you noticed. Perhaps even stepped back over the debris to find the spot where they died, and pay silent tribute.

Chips Dubbo’s clearest antecedent, however, is Barney – the security guard working at the Black Mesa research facility on the fateful day of a cataclysmic quantum event. In the original Half-Life, there were many Barneys: generic NPCs who all shared a set of soundbites; clones with no distinguishing features.

Your interaction with them was limited to a single button – press once and they would follow, press again and they would wait. But that was enough to induce guilt: if a guard fought and died at your insistence, it was on you.

The sense of culpability was only more pronounced in the case of Black Mesa’s jumpy scientists, who carried no weapons and wore no armour. Often they were used as simple horror props, pulled into vents and spewed out again as gibs. But wherever Half-Life granted you agency to look after the NPCs, you often felt a duty to do so. Here was a way to affect change in a disaster – at least until you encountered a ladder, since the AI couldn’t climb.

As a rule, the Barneys and Chips Dubbos of the early FPS genre proved hugely popular. Half-Life was originally built with only hostile NPCs in mind – but when Valve discovered that its rudimentary companion AI instantly won over playtesters, they completely overhauled the game’s story.

Over time, these generic NPCs have become recurring characters – easter eggs for series regulars to appreciate. Chips Dubbo has a Fandom page longer than some protagonists, detailing his role in practically every major skirmish the Halo games have depicted. Players have meticulously tracked his footsteps, which include numerous miraculous escapes.

As for Half-Life’s security guards and scientists, they’ve both been boiled down to individual personalities – Barney Calhoun and Dr Kleiner respectively. By 2001, Barney was starring in the Blue Shift expansion, becoming a hero in his own right.

Dr Kleiner, an expert in opening up new dimensions, is now a three-dimensional figure himself; he acts as an uptight foil to laidback colleague Eli Vance, and a grumpy uncle to Alyx. He keeps a pet headcrab, Lamarr, which Barney is afraid of.

It’s no coincidence that Barney’s is the first friendly face you see in Half-Life 2: these characters are crowd-pleasers, bonded to players through scores of unscripted firefights. And yet they’re changed irreparably by their rise to principal casting.

In Half-Life 2, Barney is practically invincible and more than capable of taking on several enemies at once without Gordon’s assistance. If by chance he does fall to a barrage of Combine sniper shells, the game simply fades to black and forces a reload. There’s no incentive to stick close and cover his flanks, the way players did back in Black Mesa– no need to treat him like the friend he is.

Chips Dubbo, too, has become a kind of undying symbol, far from the fragile man we first met in Combat Evolved. There’s even one moment where he’s fighting two famous battles simultaneously, in both Halo 2 and ODST. He’s become so impressive as to be impossible.

Today, the disposable squads that started to appear in the FPS genre around the millennium seem to have all but disappeared. As storytelling in shooters has advanced – thanks in no small part to Valve and Bungie’s efforts – developers have sought to ensure the survival of central characters.

That way they can be killed off later, for maximum emotional effect, when the script demands it. It’s a trend that’s resulted in more invulnerable NPCs and less genuine peril.

They might be a relic of a bygone era, but there was something about the braggadocio and panic of these thinly-drawn characters. They got to be human in a way our superhero protagonists didn’t. It’s no wonder that, in both Half-Life and Halo, Barney and Chips Dubbo became fixtures of their respective series. But in the process, they both become more remarkable, and thus less relatable.