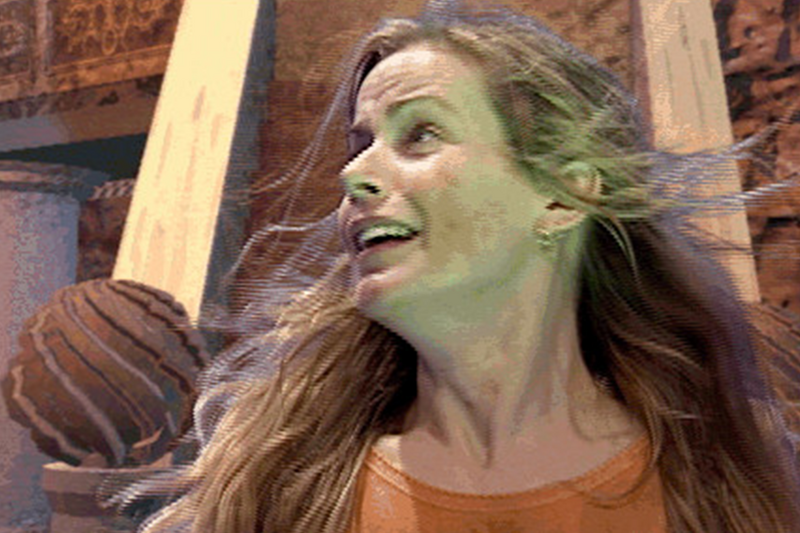 The Weird & Wonderful History of ‘Phantasmagoria’

The year is 1995: Alanis Morissette and Montell Jordan dominate the radio; you and your mom are spending quality time together by watching Xena: Warrior Princess; Batman Forever has just been released to mixed reviews; and Sierra On-Line, Inc., following the success of their graphic adventure video game series King’s Quest, has just released a point-and-click adventure horror on CD-ROM called Phantasmagoria. It’s a good year for pop culture.

While Xena has been cemented forever in modern meme culture, Phantasmagoria has been somewhat forgotten, revived every now and then by an anniversary piece or random interview by creator Roberta Williams. But the world of modern horror gaming owes a lot to the game: it was one of the first video games to be excessively and unapologetically bloody. It was violent, extravagant, and utterly creative in its kills.

But before we take a trip to the haunted mansion off the coast of New England, we need to talk about the couple who became forever known as pioneers of the graphic adventure game genre.

THE FIRST COMPUTER GAME WITH GRAPHICS

When Ken Williams, a computer programmer for IBM, brought home a PDP-10 Mainframer one day in 1979, he encouraged his wife Roberta to join him in playing the text adventure game Colossal Cave Adventure. At the time, interactive fiction games were all the video game industry had. The play controlled a character through simple text commands, essentially playing their way through a novel. It wasn’t until Ken brought home an Apple II that Roberta had a brilliant idea: What if the adventure game experience came with a graphics display?

The couple founded Sierra Entertainment, (initially On-Line Systems) and Roberta designed, wrote, and illustrated the first-ever graphic adventure game Mystery House (at the age of 26!). Taking place in an abandoned Victorian mansion, the player is locked inside and must search the house for a hidden cache of jewels. As the player explores, bodies appear, and it’s up to them to find the killer. The game, released in 1989, sold 15,000 copies and earned the equivalent of $518,199 in today’s economy. The company went on to release games like Mission Asteroid, Wizard and the Princess, The Dark Crystal (an adaptation of the film by Jim Henson), the acclaimed King’s Quest series, before becoming a public company in 1989 and releasing King’s Quest V to over 500,000 copies sold in 1990.

FAST FORWARD TO THE PHANTASM

After becoming well-known in the industry for designing fantasy and fairytale games, Roberta grew afraid of being typecast. While doing research, Roberta came upon the term “phantasmagoria” in a reference book on the history of magic and magicians; a phantasmagoria was a 17th century theatrical show that involved presenting the audience with supposedly real spirits. According to the book Phantasmagoria: The Official Sierra Insider’s Guide, Roberta had waited eight years to make a horror game, until she felt that software technology had developed and advanced enough to be able to handle FMV, or full motion video. FMV utilizes real-life sets, real-life actors, and shoots real-life scenes in place of a frame of animation or a world created by CGI. For Roberta, the use of live actors was essential for a horror game, as it seemed to be the only way the player could truly empathize with the protagonist. Since FMV transforms a video game into what’s known as an “interactive movie,” hitting the wrong button in the middle of gameplay doesn’t just potentially end the life of a 3-D rendered character or cartoon—it kills the actor right before your eyes. Playing an FMV game is like controlling the fate of the characters in your favorite movie.

“In order for horror to succeed, the player needs to be passionate and committed,” Roberta said in a 2006 interview. “The build-up of suspense is all emotion. Being ‘scared’ is gut-wrenching.”

Because of the need for FMV, the script for Phantasmagoria was written as a screenplay. In the story, a mystery novelist named Adrienne and her photographer husband, Don, buy a Victorian mansion once owned by a 19th-century illusionist, Zoltan “Carno” Carnovasch, whose wives all died under mysterious circumstances. After the happy couple moves into their remote new home, Don begins to change for the worse and is ultimately unable to stop the home’s malevolence from taking control.

Roberta crafted a 550-page script and worked with art director Andy Hoyos to create the game’s unique (and blood-soaked) death scenes. Each wife is killed according to her personality type (don’t read this next bit if you’re sensitive to descriptions of gore!): the gardener is stabbed with her own gardening tools and fed fistfuls of dirt, the alcoholic gets a bottle of fine wine to the eye, the talkative wife has her neck twisted around and around in some kind of medieval torture device, and the food lover is force-fed bloody piles of animal intestines.

Hoyos wanted the murders to seem fresh and new, and he had the right idea—the intense scenes of gore would go on to be a big part of Phantasmagoria’s legacy, and be what players seemed to find most memorable about the game. There just wasn’t anything like it at the time.

Sierra chose Peter Maris (director of several forgettable late-’80s and ‘90s action films) to direct, hired a professional special effects house (to create the dream sequences in which Adrienne has her face ripped apart or suddenly goes up in flames), cast 25 actors, and employed a 135-voice choir for the musical score. The scenes were shot in front of a blue screen in a $1.5 million studio. At the time, games that utilized FMV narration typically used around 80-100 backgrounds. Phantasmagoria, however, had more than 1,000. Initially budgeted at $800,000, the game cost a grand total of $4.5 million.

Although Sierra wanted the film sequences to have a high-end, Hollywood quality, the scenes ended up being more B-movie than anything else. Critics would later make note of the strange choices in acting, the stiff dialogue, predictable storyline, and excessive gore. Much like how Tommy Wiseau shot The Room as a serious drama but produced a film that was anything but, Sierra inadvertently produced a campy horror flick reminiscent of the ‘80s slasher flicks that followed the trope of final girl vs. killer (although some players found that the “bad” graphics added to the game’s overall creepy vibe).

Campy or not, Phantasmagoria was a hit. The seven-disc release grossed $12 million in its opening weekend and was the ninth best-selling game of 1995. The game was awarded the Editor’s Choice Award from PC Gamer and a Golden Triad Award and Best FMV of the Year from Computer Game Review.

Sure, the critics took issue with the slow pacing (the game takes place over the course of seven days) and easy puzzles (there are some that involve Adrienne simply walking in a circle). Others found the concept of a husband and wife buying a haunted house to be cliché, making comparisons to The Shining and The Amityville Horror. Some were unimpressed by the ending: after surviving the house and defeating Carno, Adrienne simply walks away from the house with a blank stare. The end. On one hand, it makes sense. It acts as a stark contrast to the constant scenes of intense violence throughout the game. On the other hand, the player endures all of the aforementioned intense violence for a rather unsatisfying ending. What happens to Adrienne? Is there supposed to be a part two?

But when CompUSA both refused to stock the game and refused to specify why, Sierra knew it had nothing to do with the concept or ending. Initially, Sierra anticipated that this would be a huge blow to sales, considering that CompUSA was the biggest discount computer retailer at the time. Conversely, this only drove sales further. Gamers were curious—what was so “bad” about the game that made a retailer refuse to stock it?

Easy answer: the infamous rape scene. In the opening scene of Chapter Four, Don is possessed by the evil spirit of Carbo and is, uncharacteristically, sexually violent towards Adrienne. Critics objected. Multiple organizations and special interest groups boycotted the game and sent letters to the Sierra offices. The game was unable to be classified in Australia because the R 18+ classification did not exist at the time, resulting in a “ban.”

Roberta defended the scene, saying, “I wanted to… abruptly kick [Adrienne] out of her comfortable world and into a world of horror. That scene does that. Without that scene, the rest of the story would make no sense.” The violence, she said, was meant to contrast the normal, loving sex scenes that occur earlier in the game. Three years later, politicians like Mitch McConnell and Mike Huckabee would indirectly blame Phantasmagoria for the school shootings in West Paducah, Kentucky and Jonesboro, Arkansas, because of the Kentucky Teachers Retirement System ownership of stock in Cendant, which had purchased Sierra.

A PUZZLE OF FLESH

The player controls Curtis, a 26-year-old with an abusive past and a father with a mysterious legacy. The summary of the plot isn’t as cut-and-dry as its predecessor: there’s multiple endings, multiple relationships Curtis finds himself in, and the story takes place all over Seattle, rather than in just one big setting. The excessive scenes of torture are replaced by excessive plot twists—though that’s not to say the game isn’t dripping with gore. In one scene, a character is electrocuted in a pool of her own blood. The “sequel” was designed by Lorelei Shannon (co-designer of Sierra’s King’s Quest VII). Roberta Williams had no involvement.

The anthology concept died, however, presumably after A Puzzle of Flesh was released to mostly negative reviews. Still, Phantasmagoria lives on. There are hundreds of playthroughs uploaded to YouTube by various users (ripped right from the original CD-ROM) and a downloadable version of the game is available for purchase on Steam. Whether you’re a gamer, a fan of horror, or just big into nostalgia, I recommend giving it a download and exploring the mansion for yourself—just don’t play on a full stomach.

Lauren Badillo Milici
Motelsiren
Lauren Milici is a Jersey-born, Florida-raised poet and writer. She is the author of FINAL GIRL from Big Lucks Books. When she isn’t crafting sad poems about sex, she’s either writing or shouting into the void about film, TV, and all things pop culture.