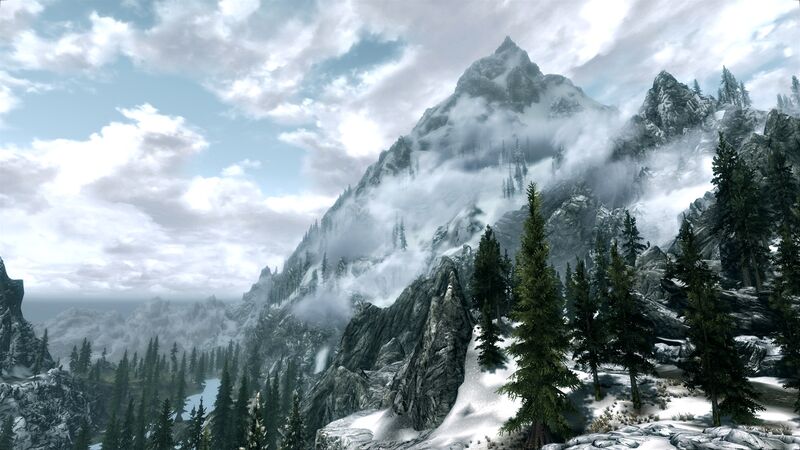 How Getting Lost in ‘Skyrim’ Helped Me Find Myself

There was a moment, as I wound my way around the snowy paths of Tamriel, ever upwards, towards The Throat of the World, the wind swirling around my shrouded Argonian form, where the soundtrack dipped into a sort of bubbly, understated electronica. It was at that moment I felt different.

I think that was the moment I started to come back. I kept on up the path, High Hrothgar now behind me, looking out at Skyrim, beyond and below. Then I met a dragon. His name was Paarthurnax. “That’s a strange name,” I thought, “even for a dragon”.

And then, for the first time in months, I started to cry.

Depression is the worst house guest ever. It doesn’t announce when it’s coming. It doesn’t even use the front door. One day you just turn around and it’s snaked in through the living room window. It’s stood behind you, sneering. It’s sat on your shoulders, weighing you down, like Yoda sat atop Luke as he wades through the swamps of Dagobah. But Yoda is fat. So fat. And he smells. And he knows everything you’ve ever hated about yourself, and he whispers all if it in your ear relentlessly.

Fighting a Dragon Of My Own

Basically, depression is a knobhead. You go to make a cup of tea and depression has peed in the kettle. You leave the room, and no matter how quick you are, depression is always ahead of you, it’s always waiting for you. Depression feels like paint fumes smell. Depression feels like your bone marrow has been replaced by clay. You catch sight of yourself in the mirror, and you wonder who that looking back at you is. What happened to laughter and hope. What happened to me?

Somehow I made it to the doctors. The doctors are always a good place to head if you think depression has arrived. Mine is only fifteen minutes away, but the walk there felt like it took forever. I got some pills. I got a sympathetic smile. I walked back home. I got into bed. I didn’t leave it until my skin was sore from laying down so long. It was dark when I got into it. And it was dark when I got up again. I felt like I lived in the dark in those days.

“This must be what it’s like to be Scandinavian”, I might have thought if my brain wasn’t completely pulped at that time. “Blimey, being Scandinavian doesn’t seem like much fun…”

And then I walked into my living room and turned on my Xbox.

Before depression turned up, I had a rule. I’ve since come to question that rule, but I’d be lying if I said it didn’t serve me well for a long time. But first some context. Depression turned my life upside down when it arrived because it was a first-time visitor. I didn’t understand what it was at first. By the time I’d identified it, I’d been lost to it. I’ve never felt defeated. I’ve never felt such hopelessness.

I’ve never felt devoid of all energy and all interest in the world. It was anxiety I’d always struggled with, not depression. Anxiety makes you do stuff. It often makes doing stuff horrendous and erratic, like you’re a Duracell Bunny, but someone’s hotwired it and added an extra battery. But anxiety has always made me want to engage with the world, not retreat from it.

But my rule has always been never to turn the Xbox on (or my PS2, or my Amiga, or my Commodore 64, or any of the boxes filled with wires and dreams I’ve loved during the course of my life) when I’m sad. Or stressed. Or when problems are looming. I’ve prided myself on the wisdom of my self-imposed rule. The discipline of it. Live in the real world, enjoy games, don’t use them to hide. The rule has meant I passed my A-Levels (in a fashion). That I got my degree (in a fashion).

That I’ve held down jobs and relationships when otherwise I’d have been lost to Manic Miner, Sensible Soccer, Grim Fandango, Fatal Frame, Silent Hill 2, Super Mario Galaxy or Fallout 3. That’s my life in games, in case you were wondering. But I wasn’t myself in those days. I was an outline of a person. No wisdom. No discipline. No hope.

So I’m at the very summit of The Throat Of The World, and Paarthurnax is talking to me. He doesn’t half bang on does Paarthurnax, but it’s hard not to warm to him. He’s kind of like a reptilian Dalai Lama, really. Everything he says is considered. Everything is at a low frequency, almost meditative in tone. And I’m crying. I can’t stop crying.

The Night Of Tears

I really can’t remember the last time I cried, despite having wanted to for months. I think it was the night up on the bridge, but that was a while ago now. Recent memory has felt a bit like staying in a budget European hotel when you turn the taps on and nothing comes out. But today the water is coming out all at once. And it’s down your front and on your lap.

And I’m sat there, holding my joypad, which slips from my hands and bounces across the floor, sobbing, loudly and relentlessly. And then I’m laughing. And I’m so pleased I’m in the flat on my own because I don’t know how I’d explain this.

I’ve spent weeks having adventures. Or dreaming of them. I wasn’t dreaming about anything in the not too distant past. Every time I closed my eyes I was just waiting for the black to fade to grey. Now my dreams have colour in them. Beautiful blue waterfalls and brown wooly mammoths and lush green forests and the warm fiery glow of a disintegrating dragon. I’ve made new friends too.

Sure, a lot of them I’ve never seen the face of, and they keep saying the same thing over and over again, something about getting shot in the knee with an arrow, but it’s still better conversation than the grunt tennis I play with the postman each morning.

They say the best defense against depression is exercise, but when you’re in it, putting your socks on is a herculean task. The last few weeks I’ve walked Skyrim left to right, up and down. Other than the times when I’ve stolen a horse. I can never go back to Windhelm I’ve stolen so many horses.

It all ends when I become stuck in a tomb I can’t get out of. Well, it is Skyrim. And so a glitch is what propels me from one world, into another. Yet by that time, I can see the path forward, and it’s away from trolls, vampires, and werewolves, towards drinks with friends and plans to visit places and do stuff. And of course, I am. Because if we believe games are art and not just entertainment, then we must also believe that games can enrich and comfort just like any art form can.

Skyrim saved my life. Thanks, Skyrim.