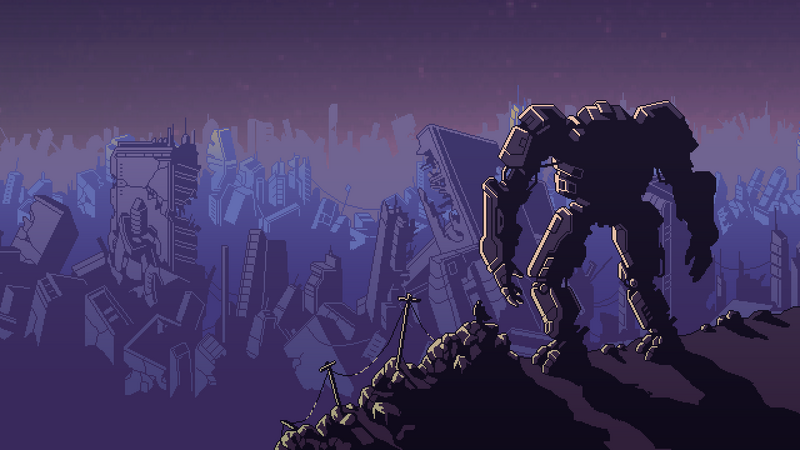 ‘Into the Breach’ Review: A Masterclass in Mech Maneuvers

The makers of FTL are back with another hyper-addictive, singleplayer roguelike — this time, their craft is applied to the realm of top-down, turn-based tactics on the PC. Into the Breach will at first look like it’s filling the Advance Wars hole in your life, but trust us: It’s very much its own experience.

When an alien force known as the Vek is victorious over humanity, the citizens of Earth start sending mechs back into the past. These giant robots don’t do much damage, but excel in their ability to physically displace the aliens. Should you be unsuccessful, one pilot can be sent back in time for another round of mech versus Vek.

As such, Into the Breach is very much an answer to the question “What if Advance Wars let you push around enemies from Pacific Rim and travel back in time when you lose like Edge of Tomorrow with persistent, rogue-lite FTL systems,” and who hasn’t asked that? We’ve all been there.

Each turn begins with the Vek moving, but all of its attacks are telegraphed and take one turn to prepare. This gives you to opportunity to shift them around in such a way that hurts enemies and saves allies. It’s like a Chess puzzle, if Chess puzzles let you manipulate enemies into capturing their own queen.

Anyone who’s played FTL will be familiar with the style of roguelike becoming synonymous with Subset games. Each encounter with the Vek offers rewards for stellar play. But within each mission is also the potential to take persistent damage. In FTL, it was your ship and crew’s health. In Into the Breach, it’s your overall power level.

Allow too many power-generating cities to fall and it’s an instant, mid-mission game over. These soft targets are plentiful, and hard to defend — you’ll soon find that targeting the enemy is a lot more complicated than just deciding who gets to die.

Almost all attacks and abilities in Into the Breach have a positional element. No gun simply does damage — rather, small damage and nudge a unit back one tile. The order of attacks becomes paramount as pushing, pulling, punching, tossing and teleporting elevates positional play over numerical min/maxing.

This changes the way you, the player, think about a tactics game. No longer is the enemy health bar truly its health bar. Reduce their HP to zero if you must, but it’s inefficient and far from ideal.

The real gauge of health becomes how susceptible a unit is to disastrous displacement. Any Vek not close to hazards or cliffs is a very healthy foe indeed.

There’s a huge amount of things you can do with this. A straight punch from your mech can push them back into a chasm, or a left hook might send them sideways into a mine. Long range missile ordnance might push an enemy into an acid pool to dissolve its armour — while behind the missile a smoke cloud is created that blinds enemies. Nearby volcanoes, airstrikes, dammed rivers, and more create tiles of danger and opportunity.

You use these weapons at your own risk, too. In these 8×8 grids, it can be hard to navigate cramped battles with area-of-effect weapons. Your first few games will be spent slapping your forehead after accidentally levelling your own cities.

Pre-built squads have combat styles in mind. Some groups excel at ice or fire. One specialises in maneuvering enemy units to fire at each other. Another likes to use smoke to blind enemies, and then electrify said smoke.

True to roguelike form, each playthrough will have opportunities to upgrade and customise your squad’s positional abilities. You can build towards a triumvirate of trappers, or a triplet of transporters. What about a troupe of trickery?

With a bit of luck and a lot of skill, some very nice synergies can be achieved. But if you think they’ll make the game easy, think again.

Into the Breach is expertly designed to create more problems than one can solve with simple 1:1 delegation. Four or five situations always plague three multitasking mechs. Cities about to be attacked, your mechs about to take damage, other objectives in danger, more Vek emerging from ground tiles… Just delaying the onslaught can be hard enough.

This forces players to be efficient in their puzzle solving. Every turn is the art of killing two birds with one drone. Prioritisation is paramount, but the goal is that miracle move that solves the board with minimal action.

Rubbing your chin for a minute before throwing your own unit into a spot where it can push the Vek beetle, which lethally charges into its own friend and blocks another Vek from spawning. That’s Into the Breach.

A crucial element of the magic here is there is, almost always, a solution. It would be patently unfair of the game to threaten mission-critical structures with no chance of you defending them.

Very rarely (about twice in 18 hours) did we come across a situation where we genuinely felt there was no solution. Even then, who knows how it would’ve played out if we did something different three turns ago.

Subset has achieved a very impressive design feat here. We don’t know if the game actually calculates possible solutions on your behalf, but it always seems to be on the right side of being solvable.

This builds a relationship of trust between the player and the developer — when you’re staring at your screen agonising over the perfect play, it’s nice to know that despite the random-ish nature of the game, the elusive solution actually exists.

Beyond the Call of Duty

In those rare moments when you’ve performed so well for a couple of missions or rounds that your situation is comfortable, Into the Breach has plenty of ways to make the game harder (other than starting a game on “hard”).

Mid-mission, you can always choose to go for achievements, for which there are three per squad. These aren’t your usual lazy fare of “Kill 200 Enemies.” These are well-thought-out challenges that act as harder puzzles and force you to play in different ways.

Boom. The game becomes hard again. Trying to meet these extra demands is often catastrophic for your current playthrough, but they’re also very fun and the persistent rewards are worth it.

Is ‘Into the Breach’ Good?

Into the Breach really nails the idea of “flow” — making a game not too hard, not too simple, maintaining just the right about of stress and excitement. Its main Vek-thumping loop ranges from “I might actually do this” to “Yikes I’m barely hanging on.” But in the rare case of comfort, there are additional challenges to ensure you’re in that sweet spot of stress.

With 18 hours under our belt, we’ve only unlocked a handful of the game’s squads, and each new crew represents a whole new way to play the game. Each have their own well-designed achievements. To 100% this game would be a very long, and very fun, proposition.

It’s a great feeling when a tactical plan comes together. And it’s similarly satisfying to see a gameplay idea so fully realised. Subset has taken positional play in turn-based tactics to its extreme. The result is at once unique, accessible, and mindbending. Every round is a newly created puzzle with perfectly pitched difficulty, and that is seriously impressive design.