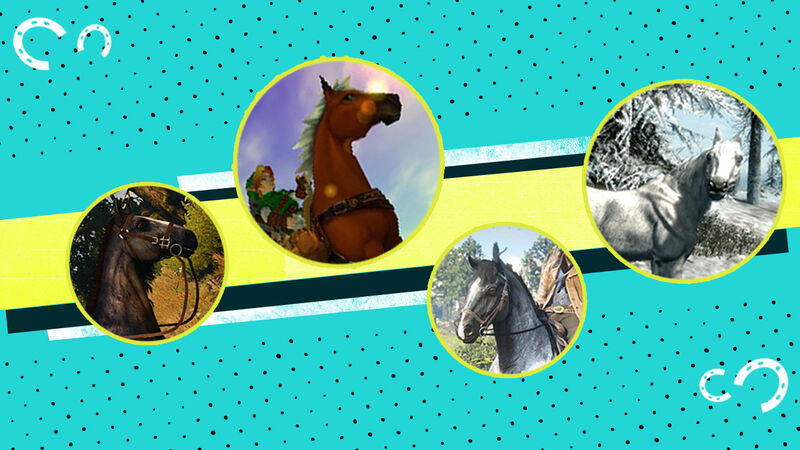 If you’ve played video games long enough, you’ve probably developed your own mental checklist of inane video game things you get excited about. Mine is mirrors. I love a good mirror. Not that video games are particularly good at them. Apparently, it’s all to do with raytracing, or a lack of it. Trust me. I Googled it. Real world mirrors work by bouncing light from another source. Video game light doesn’t work like that. Video games have to find other ways to fake the effect.

However they did it, the first time I played Life Is Strange, I must have stood in front of Max’s mirror for an hour. I think I texted a friend. I hate myself sometimes.

By the same measure, there is nothing I hate in video games more than video game horses. Given a choice between riding a horse in a video game or walking, I will always walk.

Recently I’ve been playing, and indeed, really enjoying, Assasin’s Creed: Odyssey. I’ve probably spent ten minutes on my horse. I started on him – hang on, is it a him, let me check… yes, it’s a him – but after running straight into a tree, my horse doing that thing video game horses do where they stop moving forward, yet their legs continue to gallop, pushing through air, despite remaining still, despite hovering in the air, LIKE SOME SORT OF GIDDY EQUINE GHOST – well, that was enough for me. I fancied a stroll anyway. Meet you in Athens in a week. Bring plasters because these sandals are gonna chafe.

Nope, nothing can pull me from the escapism I look to video games for quicker than a video game horse.

WHY THE LONG FACE?

One of the principal problems I have with video game horses is that in riding them, so few have felt like I was riding an entity with its own wants, needs or even its own understanding of its own mortality. I’d admit that I did use my horse to navigate Skyrim’s enormous map, but if Uber had existed in Tamriel I would have taken it. Never did I feel like my horse mattered.

Now, I love Skyrim. I think it’s one of mankind’s greatest achievements. But many times I rode my horse off a cliff and only felt slightly bashful upon hearing the crunch of its legs buckle below me as we landed on the rocks below. I don’t know why a horse would let me ride off a cliff. Developers know that horses can think for themselves, right?

Wry aside. Still, at least Skyrim’s horses, despite their propensity for mountain-based misfortune, suggested that Bethesda had learned something about the animals after wrapping up on Oblivion…

Rockstar has attempted to address some of these problems within Red Dead Redemption 2, by – like they’ve done in so many other areas within the game – applying a greater layer of reality to the relationship the player has with its steed. In many ways they’ve excelled.

The first off-mission-muck-about I had resulted in me galloping headlong into an encounter between a man and his horse, in which the horse quickly kicked the man in the head and he died. I laughed because I’m terrible like that. But as a way to establish the awesome power and individual personality of a creature on which you rely so much upon in the game, it really was a clever device.

Not long afterwards I was thrown from my horse upon encountering a cougar in the woods. That, I thought was smart too; that my ride had enough environmental nous to express fear of predators nearby, before even I was aware. I’ll be honest, I’m not totally sure how into elements like horse grooming I am. I don’t play video games to wash horses. I guess the point is to establish more of an emotional link with your animal than it merely being the means to an end that it could be. I’m just not sure that I want that link to be as boring as it – admittedly in these early stages of me playing the game – appears it might be.

And I think about that song, and how it lives in my brain forever now, embedded in the soft tissue, like an earwig has climbed inside me and bedded down, refusing to come out. And now I’m thinking that I really need to get my GameCube out and get back to Hyrule.

The thing with Epona is, though, is that being a horse is arguably the least important thing about her. Real talk. If she was, say, a dragon, would it really matter? If she had wheels bolted on, would it matter to anyone other than the RSPCA? She’s a great character. She’s a good companion. She’s a good way of getting from A to B. Is she a good horse? Meh.

Not that I want to freak anyone out Black Mirror style by professing to know what you’re doing while reading this. I promise I can’t see you, although Ricky from Newcastle should really stop scratching, you’re just making it worse. But I know that many of you are saying the word Roach now.

I know you’re desperate to make the argument that The Witcher 3’s steed doesn’t suffer from any of these problems. But I also know that somewhere inside your own heart you know you’re wrong. CD Projekt knows that it’s wrong, even including a skit within the Blood and Wine DLC that made fun of Roach’s own temperamental mechanics. Funny though. And who would have thought he’d have the voice of a New York cab driver?

Sometimes I think about the future and I get worried. Global warming. Mass poverty. The scramble for resources and the violent battle for survival that will inevitably ensue. But then I think that maybe someone will create a video game horse-riding experience that is both realistic and fun, and I feel calmed.

Until then though, I’ll walk.