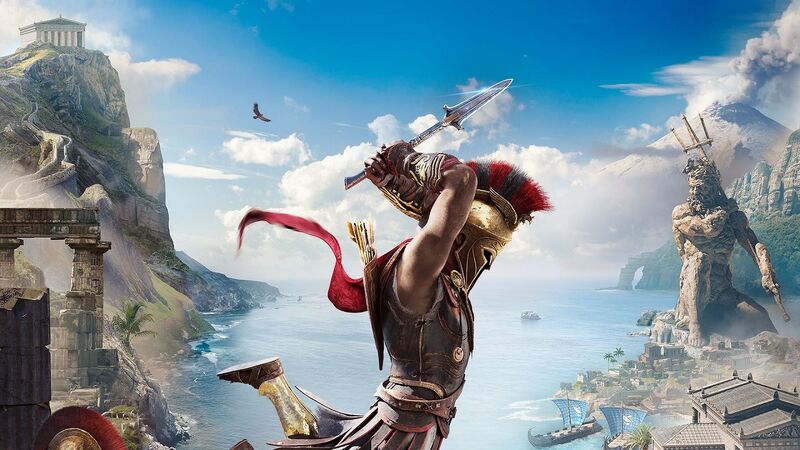 Reviewing ‘Assassin’s Creed: Odyssey’ Was an Epic Journey in Itself

The stress. The anxiety. The restless, sleepless nights. What a journey Assassin’s Creed: Odyssey has been. And we’re not even talking about the game, specifically.

We’ll talk about the game in due course, but you should know that this review has been written five times now. The first time we tried, it wasn’t especially positive – we wrote about wonky AI, a meandering central plot and bizarrely, we went on an extended tirade about there being far too many goats in the game. Goats. Everywhere. Stupid, dumb-faced goats, running out in front of us, bleating, everywhere we went.

Forgive us, we were really tired.

But reading that review back, finger hovering over the ‘publish’ button, there was a nagging feeling that wouldn’t quite shift. You know that bit in The Lord Of The Rings, where Frodo is closing in on Mordor, and he’s exhausted, but then he hears a voice internally telling him to keep on going? It was a bit like that, but without the hairy feet. There was a feeling that if we could just keep going, something awesome, this way comes.

We should say that we’d invested around about twelve hours of gameplay at that point.

And so we kept on at it, alternating between rewriting this review and pushing forward in the game. We undertook some more side-quests, pushed on with the main story. And then something wonderful happened. We realised that we’d rather be fixing the problems of ancient Greece – sometimes with kindness, more often than not with the rough end of our blade – more than we wanted to do anything else.

Not only that, but when we weren’t playing the game, we were thinking of it. Daydreaming about running through a wheatfield like a Spartan Theresa May, hopping brick-to-brick up the tallest tower, exploring the depths of a sunken cave, having a fight with a massive bear, watching the sun go down over Athens – and we could go on.

Given the imminent arrival of Red Dead Redemption 2, how long Odyssey holds this title is debatable; but at the present moment, we think it might just be the best open world game we’ve ever spent time in.

We have now been playing Assassin’s Creed: Odyssey for over thirty-five hours.

GREECE IS THE WORD

Assassin’s Creed: Odyssey may set its sci-fi-cum-historical opus against the backdrop of the Peloponnesian War, but there’s another conflict taking place at the very heart of the game. The eleventh major installment, (astonishingly) the twentieth in all, it’s one which is far less significant to real-world history than the epic, ancient battle between Athens’ Delian League and the Peloponnesian League, led by Sparta. But within videogame culture, it’s a pretty important one, which asks some big questions.

Because at the heart of Assassin’s Creed: Odyssey, is a battle between grand ambition and with the edit function.

The biggest question of all, is how big is TOO big? See, you’ve experienced big sandboxes before, but nothing can prepare you for Assassin’s Creed: Odyssey. It’s no exaggeration to say that you could be playing this game for a couple of years.

As we explained, we spent some time questioning whether this was a good thing or not. Where we’ve ended up is that the sheer size of the game is a great thing. Yes, there is a huge amount of grinding if you want to see and do everything.

Yes, the inclusion of game-speeding-up microtransactions might rile, depending on your ethical viewpoint regarding them (despite them being incredibly easy to ignore). But what Assassin’s Creed: Odyssey offers you, is an astonishingly varied, staggeringly beautiful representation of a fascinating (and bloody, anarchic, exciting; all the good stuff) period of history to go and get lost in. To go and do a huge amount of fun stuff in – and not a fetch quest in sight! To immerse yourself in.

Getting lost and Odyssey’s clear search for immersion should not go unpraised. So many of us play videogames because we want to be transported to somewhere more exotic than where our regular life is set. This idea is central to Odyssey’s gameplay. And, excuse us while we boot up the Animus; even to the premise of the series itself.

Helping achieve this, there’s even a new gameplay mode, the ‘recommended’ Expedition Mode, that removes the tags and markers of previous installments. Starting in 431BC – which fans of numbers might be interested to learn is 400 years before the events of 2017’s Assassin’s Creed: Origins, meaning that game’s title really does seem a bit silly now – this installment in the series is an RPG experience that towers above so many of its peers.

Sure, it’s looking up at The Witcher III’s handsome chin. We’d still place Zelda: Breath Of The Wild above it. But it’s taller than GTA, any Far Cry, new Fallout and the like. For a while there, Assassin’s Creed was becoming just another gaming franchise. Odyssey resets all future expectations. Ubisoft deserves credit for bringing lustre back to the series.

See, around about review four, we realised we were looking at the game all wrong. We were judging it for not being able to fit around our schedule. It’s a frantic world. Few have the luxury of playing thirty-five hours of a videogame in a week. But then we started to think that Odyssey’s stubborn refusal to bend in its vision, really is the magic contained within the code.

There’s something almost meditative about Odyssey’s gameplay. It stops the real world and presents a new one. Swim in the world’s clear blue oceans, and you might surface at the same time a whale breaches the water, maybe one of modern videogames truly great moments. Climb high enough, and you will have to travail the giant, granite cock and balls of the Greek God Zeus (which isn’t, but it is pretty funny). The central story is excellent – basically a really dysfunctional family drama, think EastEnders meets 300.

The protagonists at the heart of it – the game gives you the choice between playing as the mischievous Alexios or the sassy Kassandra – are brilliantly written. And, there’s also large chunks of the game set at sea, giving you the chance to commandeer giant Hellenic era warships, with crew that serenades you as you plow into epic oceanic battles. Those bits are SICK.

You get to hang out with Socrates! Medusa is in it! There are huge battlefield scraps you have to take part in, with bits of bodies flying left, right and centre! You can kick people off cliff tops! You can have loads and loads of sex! And of course, the games two basic tenants – parkour and creeping up on people, then stabbing them in the back in truly gruesome fashion – remain two of the most fun experiences videogames can provide.

There’s some stuff that should never be changed. Add to this an impressive proper RPG experience, combat that actually makes you want to step out of the shadows and fight on the ground, and a skill tree that is genuinely rewarding each step you take up it, and the game is unquestionably an incredible experience. It’s just, you don’t really see that until you’ve invested at least half a day of your precious time into Odyssey.

It’s not just the pacing that’s a problem here though. The AI is pretty pathetic. Raid a bandit camp, free a slave from their sub servitude, and if you accidentally graze them with a blow, they’ll turn on you with no thought for the liberation you’ve just bestowed on them.

Equally, there was a moment during our gameplay where we’d fought – and slain – what seemed the entire Athenian army, only to be desynchronized by a chicken as we left the battlefield. Given how impressive the NPC interactions are, how real the world seems, the meandering idiocy of so many of them in combat, or in travailing the map, really jars.

And, despite the rewards for your investment being so great, and notwithstanding the epic awesomeness of a giant world that provides time out from the real one, a videogame really should not take ten hours to convince you of its brilliance. The Godfather II is a wonderful film. A masterpiece, and it clocks in at well over three hours. And yet, were Frances Ford Coppola to have included three hours of Al Pacino’s character, Michael Corleone, picking his nose (or in the game’s case, having an inane argument about the financial merits of opening a vineyard), we might not have made it to the really good stuff.

Is Assassin’s Creed: Odyssey Any Good?

There is fat on Odyssey. Fat that could be trimmed and not mar the experience one jot. We’re pleased we took our time to write this review. The first four drafts didn’t do the game justice. Assassin’s Creed: Odyssey is too visionary a title, too fun, too memory making, for these flaws – irritating, exhausting, not game breaking – to negate us recommending it to you. It’s one of 2018’s best games. One of the decades finest. You will soak up the game like the characters within it absorb the Mediterranean sun.

Although, in case you were wondering. There really are far too many goats in the thing.