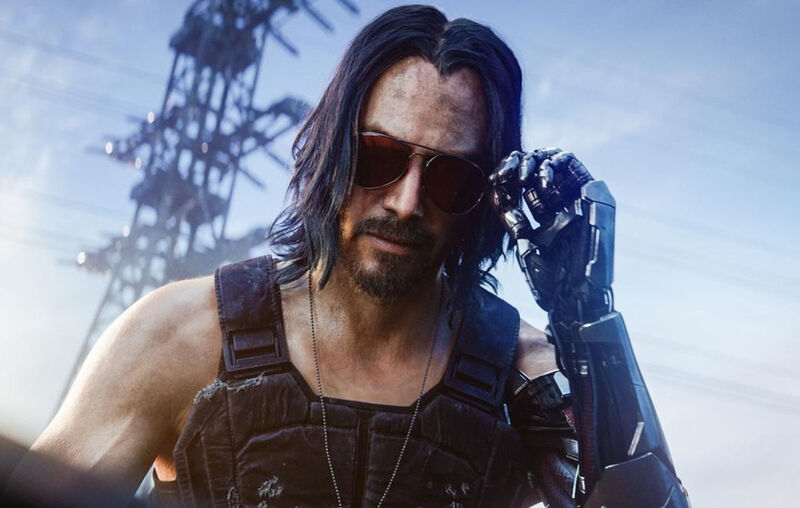 Keanu Reeves, ‘Cyberpunk 2077,’ and What Stars Bring to Video Games

With Keanu Reeves starring in the high profile release of Cyberpunk 2077, it’s worth pondering what exactly it is that superstars bring to video games. Is it simply a gimmick? Or do celebrities bring larger profit margins to video games that otherwise wouldn’t have been as popular?

Celebs in video games grew in popularity around the mid-1990s, as graphics improved and you could fully tell you were truly looking at the image of a famous person – or simply a famous character. Years before, Atari tried their hand at bringing E.T. into home consoles everywhere, and even if that game didn’t get dumped into an unmarked grave, it still would have been hard to distinguish E.T. himself from any of the other cast of characters. While the groundwork was laid by the likes of Mike Tyson’s Punch Out, it wasn’t until the 90s that graphics were good enough to truly feature celebrities. Arcade games like Michael Jackson’s Moonwalker let players fight while playing as a familiar star. Not long after, gamers got the chance to become 007 walking around in Pierce Brosnan’s skin (albeit a blocky version of his skin) in the beloved GoldenEye for Nintendo 64. Players could pretend to be MI6’s top agent while getting frustrated to no end by Natalya. However, despite playing as James Bond if they wished, players were still subject to text blocks instead of the actual dialogue.

Pierce Brosnan may have been one of the most notable celebs initially lending their image to a video game, but he was far from the last. Video games started to move away from the main avatar being the celebrity and moved towards superstars becoming an NPC that gamers could play alongside.

THE HOLLOW SHELL VS. THE KNOWN CHARACTER

When Spyro hit PlayStation, the famous dragon was originally voiced by actor Carlos Alazraqui and then, eventually, Tom Kenny, who is most notably known for voicing SpongeBob SquarePants. The original game, released in 1998, sold about 1 million copies during the holiday season and went on to sell about 5 million in the US alone. When the series was rebooted, it now featured famous folks like Elijah Wood as Spyro and David Spade as Sparx. However, the celebrities didn’t hold as much clout with the audience as some may have expected with the new game selling just about as well as the original series, with no discernable boost from the familiar voices.

Many games utilize the “Silent Protagonist” as the playable character so that gamers can determine how the character is played. Developers have said that Link has never spoken so that players can put their own personality into the character and makes it feel like they have more ownership. Whether gamers are playing as Link, Gordon Freeman, or Chelle, no matter who is playing the character, anyone can feel like it’s their own thoughts and actions. This creates a catch-all ambiguity in the avatar.

However, this also creates a divide between the types of playable characters. The player has put a personality into an avatar versus characters that already come preset with a personality. In a sense, when a player plays a celebrity avatar they are role-playing with a pre-set skills sheet.

PlayStation was one of the first systems that could almost handle the complete design of a celebrity in-game. Activision continued their incredible work and scanned Bruce Willis into the game Apocalypse. Now, instead of playing as, say, an innocent elf-boy from Hyrule, gamers were controlling Bruce Willis himself, complete with full voice over performance and action. There is virtually no one on the planet who hasn’t heard of or at least seen a movie with Bruce Willis in it. Therefore, people know what to expect in the character. They’ll “Go out to the coast, get together, have a few laughs” and ultimately serve up a hot plate of butt-kicking with a side of sarcasm.

It was from here that celebrities in games started appearing more, though still not always as playable characters.

MOST NOTABLE CELEBS IN GAMES

2019 brought us Norman Reedus starring in Death Stranding. Even though fans were initially hoping for another Silent Hill installment starring Reedus and directed by Guillermo Del Toro and designed by Hideo Kojima, they still got the Walking Dead superstar for this game. This wasn’t a character that Reedus had pre-established, but rather became someone that gamers unraveled the more they played the game.

Going back a few yeas, Mark Hamill reprised his role as the Joker, whom he first voiced in Batman: The Animated Series, in the Arkham games, much to everyone’s delight, though this was less of a celebrity addition as much as it was just carrying over a fantastic performance as an iconic character. Many people who watched Batman: The Animated Series series had become familiar with Hamill as the voice of the Joker, and it seemed like a natural fit to have him and Kevin Conroy (returning as Batman) play these roles again.

Many celebs featured in Disney’s animated films have come back to do voice work for the Kingdom Hearts franchise, even if it’s just for a few lines to help Sora out. Seeing as Kingdom Hearts is an insane mash-up of both Final Fantasy characters and virtually all of the Disney universe, it’s impressive if they get anyone who just sounds similar, much less folks like Frozen‘s Idina Menzel, Kristen Bell, Josh Gad, and Jonathan Groff. At the same time, Haley Joel Osment has voiced Sora for so many years that he virtually grew up with the character as the games progressed.

Meanwhile, Jeremy Davies, who will forever be immortalized in the 2018 God of War game as the character Baldur, was quoted as saying that he had been trying to break into video games over the last few years. This is an actor who has starred in huge projects like Saving Private Ryan, Twister, Lost, and Justified. It’s remarkable that an actor, with so many top-tier credits, was struggling to break into the video game industry though it’s not hard to see why. The gaming industry has been inundated with new projects which can take years to complete. A majority of roles have gone to notable voice actors who have worked in the industry long before stars from the silver screen joined in. With years of talented actors like Nolan North (Uncharted), Troy Baker (The Last of Us), Jennifer Hale (Mass Effect), Tara Strong (Final Fantasy X), and legend John Dimaggio, there is a wide swath of performers that gamers have come to know and love. Having film actors enter the arena can often still risk feeling more like a ploy to get people to buy more video games than it is about expanding the universe or the story.

NOT ALWAYS A GIMMICK

If there’s one thing gamers know, it’s being able to root out a gimmick from a mile away. Some have criticized the gaming industry for using celebrities as gimmicky tools to sell more copies of the game both when it comes to directly casting them or even “borrowing” their image. Take for example the strange issue with the first Last of Us game where Ellie looked suspiciously like Ellen Page. Page was not happy about the similarities, especially since she was already working on another Sony-developed video game at the time. Eventually, Neil Druckman of Naughty Dog changed the likeness of the character to reflect that of the actress, Ashley Johnson, who actually performed the role. However, it wasn’t the controversy over the character that sold over a million copies in the first week of its release. The story and the production quality is what drew gamers into the zombie shooter and sold so many copies.

“The global video gaming industry is expected to be worth roughly $159 billion in 2020. This surpasses the box office film / the movie industry revenue by an easy 4 times, AND almost 3 times the music industry has built up thus far.”

To say this all boils down to money would be a disservice to what is actually happening. Yes, the gaming industry is riper than ever with funding, but this also means that more heavy hitters are becoming involved as well. Consider the boom of streaming services. It took a moment for them to get off the ground but now fans are seeing movies like Project Power being made under the Netflix banner and starring movie stars like Jamie Foxx and Joseph Gordon Levitt. The same is happening on a wider scale with the video game industry.

Not only are video games the perfect place to start a blossoming franchise, but they’re also becoming more interesting and complex in plot and aesthetic. Games, and especially AAA titles, are going beyond the scope of traditional video games, and now talent is sought out that is on the same scale. This does not by any stretch mean that celebrities should be playing every role or taking over roles that we’ve grown to know via the original voice actors. If Tom Hanks somehow took over the voice of Mario, this would be a really weird transition, and probably one that I’ll spend too much time trying to imagine. But suffice to say, the brilliance of Charles Martinet as Mario is something gamers have become accustomed to as much as they have in hearing Mark Hamill voice the Joker.

All in all, celebrities in video games are no longer gimmicks to get people to buy games for the simple reason that gamers do not gravitate to these types of selling ploys. The games are already selling well as they are, because the source material is becoming more expansive. Still, the talent that actors like Norman Reedus or Keanu Reeves bring to a project can often help elevate the vast source material even further.

In a recent interview with Collider, Senior Quest Designer Patrick Mills explained how Cyberpunk 2077 was already rooted in a lot of source material. Yes, of course, one of the major influences to the genre was the film Blade Runner, which has gone on to inspire many cyberpunk-themed stories, but Reeves’ character was also derived from a pre-established character from the Cyberpunk role-playing games. Said Mills, “Johnny Silverhand is a character created by Mike Pondsmith for the original Cyberpunk 2020 book. He appears in a series of short stories, which we reference in the game.”

It’s extremely likely that Cyberpunk 2077 would have sold just as many copies even if it didn’t have Keanu Reeves in it. The lore has already been established, as Mills notes, and the game has been getting attention since it was announced. However, with Reeves’ name attached, it only increases the chances that the franchise will continue beyond just the one game. The Cyberpunk franchise has already been solidly established, but attaching big names only leaves room for more expansion in the universe.

With Reeves involved, there is the possibility not only for sequel games but even a film or streaming franchise with a beloved actor already set up in a leading role. This also leaves open the possibility of other stars entering the Cyberpunk 2077 universe, much like the Conan O’Brien Easter egg in Death Stranding. The sky’s the limit for the franchise, and Keanu’s involvement is just the first stepping stone.

Cyberpunk 2077 will be released on December 10.