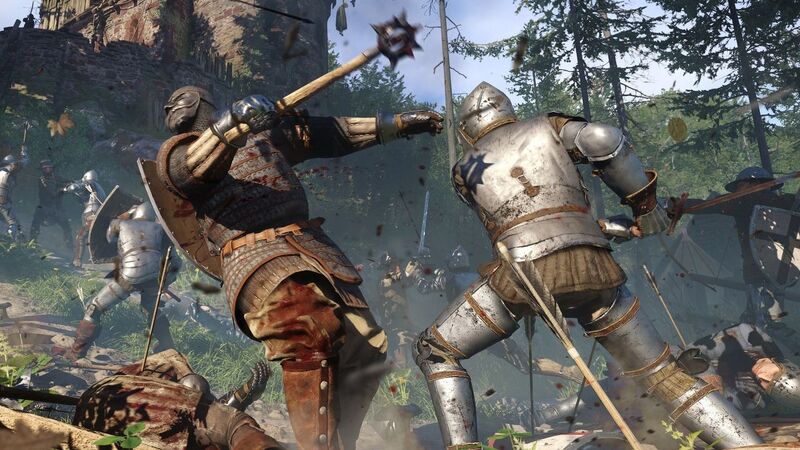 Life in early 15th century Europe was a hotbed of strife and turmoil.  Back then, unlucky townsfolk succumbed to a life of servitude in the age of Feudalism, with death and disease looming heavy over every doorstep.

Still, our ancestor’s hardships weren’t entirely in vain. It turns out that this backdrop of the cruel, tumultuous reality of medieval times has the potential to kindle the beginnings of a compelling story – and one that’s arguably a spark brighter than any a dragon or wizard might conjure.

Kingdom Come: Deliverance, is a great example of this, offering gamers a passionate love letter to times of yore. Instead of embracing the often overdone tropes of modern fantasy, Czech developer Warhorse Studios looked to events of its country’s past to provide the backbone of their intriguing narrative.

(Kingdom) Come With Me If You Want to Live

Kingdom Come: Deliverance takes place in 1403. Set in the land of Bohemia ( what we now know as the Czech Republic)  the story starts after the death of the land’s beloved King Charles IV. Mourned by his subjects and the unwashed populace, the kingdom’s rule is swiftly handed to his incompetent son, Wenceslaus IV. With Wenceslaus spurning his civic duties for more leisurely pursuits, his inheritance of the crown quickly angers his citizens and destabilizes the region, drawing the attention of his half-brother, King Sigismund of Hungary.

Spotting his opportunity, Sigismund kidnaps Wenceslaus IV, forces him to abdicate his rule, and then invades Bohemia.

With this dramatic true story serving as the game’s backdrop, players are put in the shoes of the decidedly un Czech sounding Henry. A lowly son of a blacksmith, Henry makes a living helping his father craft items for the town’s ruler, Lord Radzig.

His somewhat pampered life suddenly and drastically changes, however, when the aforementioned Hungarian invaders storm the town and slaughter its inhabitants.

Henry watches in horror as his mother, father, and girlfriend are mercilessly murdered before him. Our hero narrowly escapes his burning home and eventually catches up to Lord Radzig, pledging his allegiance to the fleeing lord. This is where the game’s long, ragged journey of revenge truly begins.

Exploring the Pages of History

Kingdom Come: Deliverance, has a robust amount of locations for players to explore and an almost overwhelming amount of quests for them to undertake. Warhorse Studios conducted extensive research on the time period, including social, political, and geological elements of Bohemia to craft a historically accurate world — and it shows.

The towns you visit and nobles you encounter in Kingdom Come: Deliverance are based on places and people who actually existed. The studio cut no corners in its research, and every major or minor discovery within the game rewards the player with a more in-depth codex entry. The codex is as information dense as several history textbooks, and hours can be spent reading its entries if you fancy learning more about the time period.

Alongside the research, there are also beautiful, hand-drawn Middle Ages style art found embedded along the edges of the world map. It’s a nice touch, and this ornate visual presentation does wonders for player immersion.

Yet, the game also teaches you as you play. Over the course of his journey, Henry interacts with both nobles and common townsfolk alike. The dichotomy between highborn and lowborn livelihoods are evident with every interaction. Henry has the tendency to speak his mind bluntly to nobles, which can get him into hot water, while his interactions with townsfolk, tradesmen, and beggars are rooted in a common understanding of struggle and suffering.

It’s clear how much of a passion project Kingdom Come: Deliverance is for Warhorse Studios, and their vision of a harsh medieval world is wonderfully actualized in Henry’s adventures.

Problems of the Past

The combat in Kingdom Come: Deliverance runs on a rigid real-time system based around both close and long range combat. Like the history behind it, the fighting mechanics have been built with realism in mind. When battling up close, a reticle of five cardinal directions appears on your target. These five directions allow you to choose the swing direction of your attack.

This lets players chain together attacks from different directions, feint an attack one way and go another, or even slip an enemy’s defensive stance

Surviving a tense duel isn’t as easy as it sounds though. Here, your strikes are tied to stamina, and button mashing, or merely being too predictable, will lead to a quick death.

While there are several different melee weapon types, disappointingly, the core of combat remains largely unchanged whether you’re wielding a sword, mace or axe. There are, however, special moves to unlock once you gain proficiency in each weapon type. Yet, despite this, combat still feels shaky and unpolished, especially when you’re challenging more than one enemy.

When fighting a crowd, it can be difficult to switch targets or be aware of who is behind you. The system shines brightest in one-on-one bouts, but the weighty nature of your strikes and a few disjointed animations of clashes or grapples can make these first person fights feel pretty disorientating.

Thankfully, the ranged combat of the bow is crisp by comparison. There is a lack of a targeting reticle so eyeing up each shot takes focus and practice. You might never become a true sharpshooter, but there is still some magic in growing comfortable with the rhythm of drawing and loosening each shot. Thanks to the fluidity of the archery, we found ourselves relying on bows more than melee throughout most of our playthrough.

Despite what its pre-release trailers might suggest, most battles aren’t massive medieval showdowns, with the large-scale battles filled with lines of troops confined to major story events. These screen-filling battles are pleasantly chaotic, though most of the carnage is distributed between your allied troops and enemies, with Henry merely being a small piece in the big combat puzzle.

A Deeper Kind of Role-Playing Experience

While combat leaves a lot to be desired, the true strength of Kingdom Come: Deliverance lies in its emergent gameplay systems and quest designs. Henry isn’t outfitted with mythical powers and isn’t a once-in-a-generation warrior, instead, he is a normal human being with limits. And it’s those limitations that define how you approach everything players do in the game.

Many quests involve Henry taking a detective role, traveling across different towns and questioning lowborns and nobles for details. People can be persuaded to give up information based on how high Henry’s speech skill is, how well dressed and clean he is, or how strong and intimidating he appears. And if talking isn’t your style, maybe you’d rather bribe someone for information? Or just sneak into their home and rummage through their belongings? Whatever approach you want to take, the choice is yours.

Still, despite the options available to you, completing quest lines and discovering information requires a pretty determined player, as Kingdom Come: Deliverance will do little to hold your hand. There were several times we found ourselves at a dead end after a particular lead refused to give us information.

The world is ruthless and waits for nobody – and neither do some of its quests. If Henry isn’t prompt in completing the task at hand, the quest giver might move on and the opportunity is missed.

A Refreshing Attempt at Realism

The emergent systems of Kingdom Come: Deliverance was game’s primary focus in development and this realm is where the game truly becomes something special. No task is easy — whether it’s breaking up townsfolk scabbles on guard patrol to learning how to read. Debt collectors will find and pester you. We walked around a major city one night without a torch and got fined for it the next morning. We began tipping our local armorsmith after every purchase and he eventually went on to give us discounts later.  Its these moments that stick with you.

Kingdom Come: Deliverance has the strength of making Henry feel like the most important person in the world, or just a meaningless cog within it –  sometimes in the same breath.

Henry has an energy and nourishment meter alongside his health – and in a nice touch, eating and sleeping are paramount to his combat and dialogue success.  Food can be gathered by hunting for game in the woods or buying from vendors, but food is perishable and loses its freshness rather quickly. The world is harsh in Kingdom Come: Deliverance and the game’s systems remind you every step of the way.

As expected in a game experience of this magnitude, Kingdom Come: Deliverance does suffer from a fair few technical hiccups and issues. Attempting to jump above a hedgeline of a path might lead you to getting stuck. While sneaking can give you a jump in combat, we came across some general weirdness when enemies would discover and pursue us, but not attack until we toggled off sneaking.

Items and loot sometimes disappear too, and corpses might clip through the floor never to be found again. Even after a 20GB Day One patch, the game still feels disappointingly loose around the edges.

This is far from a perfect game. Yet, thanks to the strengths of its flexible quest design, survivalist systems, and an expansive, downtrodden medieval world to explore, the sheer ambitious scope of the game helps you put up with its myriad of technical issues and lumbering combat system.

While many of Kingdom Come: Deliverance’s gameplay elements feel a bit lackluster, you have to commend Warhorse Studios for forging their own path in the adventure game landscape – approaching every little aspect with their own creative take.

Despite its lack of polish, Kingdom Come: Deliverance is an engaging ride. If players are willing to embrace the beauty of history and the challenge of survival in a world that cares nothing for its inhabitants, role-playing doesn’t come much more satisfying than this.