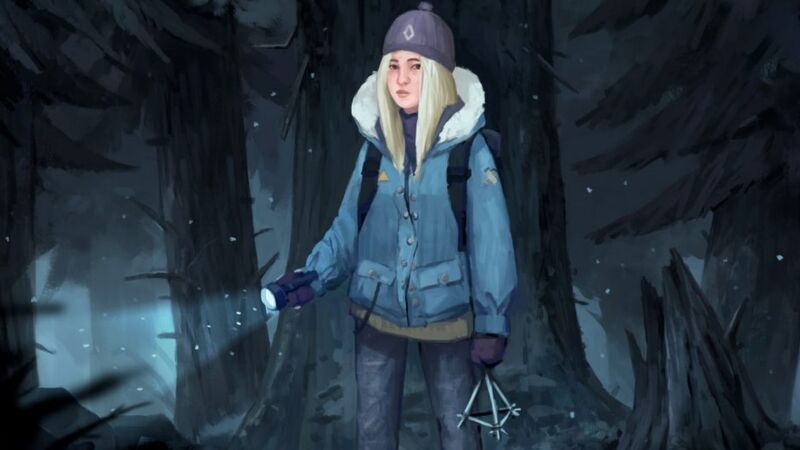 Puzzle games are back. Like many genres long thought lost in the first-person shooter dust, puzzlers have been rediscovered by modern audiences through the booming indie gaming scene. Recently we’ve seen excellent titles like Obduction, The Witness, and Rime bring contemporary trimmings to the kinds of experiences first pioneered by titles like Myst and The 7th Guest.

Now we can add Lake Ridden to that list.

Forest for the Trees

Somewhat ironically, Lake Ridden is set during the height of the retro-gaming era; 1988. Out in the dense forests of Maine, USA, a thirteen-year-old girl, Marie, is camping with her younger sister Sofia and some friends. The brethren have a fight, causing Sofia to flee, disappearing quickly into the thick mist that hugs the gaps between rocks and tree trunks.

When she fails to return, Marie sets off to find her, and it’s at that moment that gamers jump into her shoes.

You’ll have barely nestled your fingers into the grooves of your WASD keys before you’re blanketed in Lake Ridden’s meticulously crafted atmosphere. Tall pines stretch out towards the stars above, as wispy fireflies dart between flowers that give off an eerie neon hue. Sounds of owls and footsteps float through the air, filling in the gaps between the slow, near-ethereal soundtrack.

It’s reasonable to lower your production expectations when playing games in the relatively low-budget indie scene, but you don’t have to here. Wrangling the utmost out of the Unity engine, Lake Ridden is quite gorgeous. Midnight Hub counts Mojang, Massive and Paradox veterans among its hierarchy, and that experience counts. There are plenty of tricks in play to hide the reuse of assets and suffocate draw distance, but it’s engineered in such a way that you have to deliberately look to notice.

Indeed, while it’s a very narrow environment in truth, Midnight Hub has done a fantastic job creating the impression that there is a big wide world out there (even if it’s trying to swallow you up!)

Fans of Remedy’s brilliant Alan Wake will no doubt have flashbacks to that game’s setting while playing Lake Ridden, especially in the way it evokes a constant sense of uneasiness. The feeling that something is not quite right; leaving unsure of whether this is reality of not. As such you can’t decide on whether to be terrified or overjoyed.

However, where Alan Wake was heavy on the action, Lake Ridden is focused in on its story. Through Marie’s inner monologue and clues picked up along her path, you begin to unravel a host of interconnected secrets.

It quickly becomes clear that many people have gone missing in this forest over the years, and learning more about the area’s ugly past only acts to heighten your fears for little Sofia.

If there is a weakness, it’s in Marie herself. In the face of such bizarre, supernatural phenomenon, and with the safety of her sister seriously under threat, the choice to go with a dour, near emotionless narration doesn’t ring true. We can see what Midnight Hub was going for, but the lack of trepidation, urgency and “my mind is so blown right now” wonder in her voice doesn’t fit.

And there should be wonder! Deep in the woods, Maria comes across an old estate and its surrounding gardens. They’re creepy and enchanted in equal measure. If the 1980’s era forest setting and missing child narrative weren’t enough to make it obvious, the otherworldly vibe locks and loads the Stranger Things comparison.

You’d certainly be forgiven for thinking Eleven might emerge from the guts of some tree at any second.

Instead of Eleven, however, you will find puzzles. In truth, the entire story is a puzzle: you’re slowly working out where your sister is and what the deal is with this freaky forest. But you’re also never far from a more physical puzzle, too.

There’s a real mix of puzzle types on offer, which feel like they have been pinched from a host of different titles across the genre’s past. In some instances you have to hunt down the clues needed to know the answer to a puzzle. In others you may need to locate an object required to access a new area. There are patterns to follow, blocks to move around, images to recreate, and environmental trickery to get your mind around.

There is even some conversation branching, where you can probe the mysterious residents of the estate for information you can use later on.

It’s subjective of course, but we’d label these puzzles “medium” difficulty. You’ve usually got a pretty good idea of what you need to do – which avoids frustration – but you’re still challenged in getting to that solution. The result is actually rather addictive and we definitely felt compelled to press on not just to learn more about the story, but simply for the fun of tackling the next puzzle.

It helps that the interface is simple and responsive. We were actually reminded on more than one occasion of mobile hit The Room, and the way you could pick up objects and rotate them, or manipulate them with easy movements and cursor drags.

It’ll Stick With You

We did mention earlier that Lake Ridden is an old school genre with modern trimmings, and that’s not just found in the presentation. The game is played fully from the first-person, allowing you to walk, run, jump, and interact freely with the world. As much as the old-school puzzlers seemed brilliant in their day, this form of free movement is immeasurably more immersive.

Which is ultimately what Lake Ridden offers. The best part of ten hours of atmospheric, engaging, and immersive brain food. It looks good and delivers enough in its storytelling and puzzle challenge to keep you hungry to experience more. Which means solving the riddle of whether Stranger Things’ fans should check out Lake Ridden is an easy problem to solve.