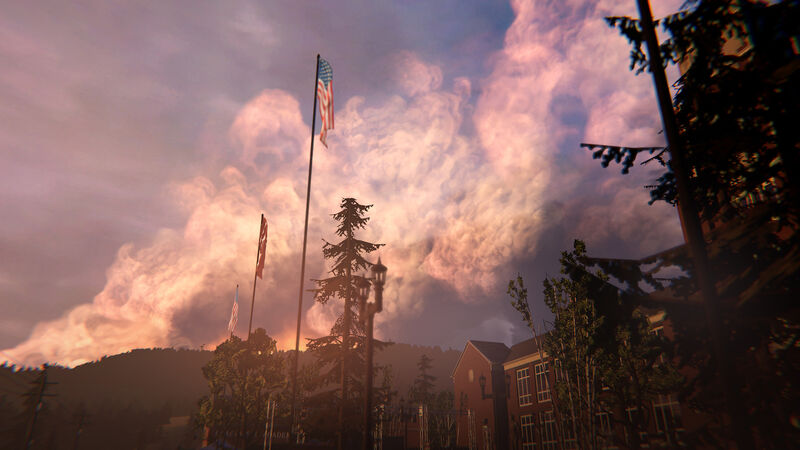 ‘Life is Strange: Before the Storm’ Episode 2 Review: A Thing of Darkness

The first episode of Life is Strange: Before the Storm, the episode sequel to the critically-acclaimed Life is Strange, serves as an introduction of sorts. It introduces the world of Chloe Price, a troubled teenager dealing with more sorrow than any young person should have to face. Her best friend moved away and won’t answer her letters or texts, her father died in a horrific car accident and her mother is moving on with a controlling man Chloe can’t stand, and all she can comfortably rely on is her stash of weed.

But whereas the first episode set the stage, the second episode, “Brave New World” is a performance on the stage itself — quite literally, in one scene — and presents ideas and consequences that will ripple through the rest of the story in surprising, sometimes upsetting ways.

Done with table setting, “Brave New World” immediately presents players with an important dilemma to tackle. The episode opens with Chloe and Rachel along with their parents in a meeting with Blackwell Academy’s Principal Wells. The two have been caught for skipping school, and the resulting conversation you have with Wells will determine much of the tone for the rest of this episode. It’s here you learn more about Chloe’s long history of deviant behavior at Blackwell, and about Rachel Amber’s model student life.

In this first Backtalk scenario — in which you use Chloe’s ability to fight or smooth-talk her way through tense situations — you will carve the path Chloe and Rachel’s relationship takes moving forward. While the individual choices Chloe has available seem innocuous enough, it’s not quite the case; Life is Strange: Before the Storm has been subtly letting us know from the beginning that every choice big and small matters.

We saw the effects of this in the first episode, where we learned that the decisions we are players are being presented with actually do matter. There is no illusion of choice in Before the Storm — there’s just choice. And knowing and having this is what makes this story so powerful.

No One is Spared

We can’t say much about this episode without spoiling its major reveals and those of episode one, but without going into details: the emotional rollercoaster has doubled for “Brave New World,” without several highly-tense moments setting up major decisions that affect the livelihood of many characters.

The Backtalk sessions are more difficult in this episode, and you have fewer chances to make Chloe say the right thing before the person she is speaking to ends the conversation in an unfavorable manner. The “right” answer is also not as readily apparent as it seemed in the first episode, and while asking one curious question may reveal something about a character, it could shut down the conversation entirely, losing Chloe the chance to discover something more important. It’s a delicate balancing act, and with limited time to choose each of Chloe’s responses, the conversations feel more urgent, and more real.

And the lasting consequences don’t just affect secondary characters either. Yes, there are a handful of support cast members that can potentially get hurt depending on how selfish or impulsive you make Chloe behave. But friends and family are on the chopping block as well, and everyone from Chloe’s mother to Rachel Amber can be emotionally alienated from Chloe if her actions and words aren’t chosen carefully.

But these big-decision moments aren’t the only ones that matter in “Brave New World.” This episode is all about the set pieces, locations and things that have or will have an impact on Chloe — or Max, eventually, in the first Life is Strange series.

These set pieces include the junkyard, where Chloe and Max rekindle their friendship in the original series and where Chloe and Amber begin theirs in Life is Strange: Before the Storm. And Frank’s RV, which we explore briefly in the original series but get a deeper look into his life through in the prequel. Then there are new locations that offer exciting new promise, like the actual performance of The Tempest, which creates the setting for one of the episode’s more memorable moments.

You also learn more about how Chloe became the person she is in the original Life is Strange. Little details, like where she found her trademark beanie, and larger ones, like how the relationship with her mother became strained, are all present. And the episode gives these moments space to breathe, allowing players time to explore these moments and move around in these places, letting them just be in the moment with Chloe. The emotional intelligence of this series shines, and nowhere more so than in these long, drawn-out moments.

Speaking of: there is one moment towards the end of the episode that must be hard-earned, according to the developers. Dozens of smaller choices lead up to this moment, and some players won’t even get the opportunity to see it because it calls back to choices made all the way in episode one. But it’s worth the work, and with it, developer Deck Nine Games shows it’s listening to its audience, and following its feelings as they evolve the story.

Is Before the Storm Episode Two Good?

Perhaps the biggest emotional impact of episode two — and this series has been very successful in pushing emotional buttons from the start — is watching Rachel Amber live her life. We see her feel happiness, feel pain, and find moments of real joy. We watch her do horrible, not-so-nice things, and watch her do sweet ones. We see her smile and laugh, and frown and curl into herself. This episode makes it hard to watch Rachel Amber, because if you’ve played the original Life is Strange, knowing the cruelty of her impending fate makes experiencing her world devastating.

Life is Strange: Before the Storm has so far been consistent in its delivery of a heartfelt story with lots of wiggle room for players to craft their own emotional journey. The final episode can’t come soon enough.