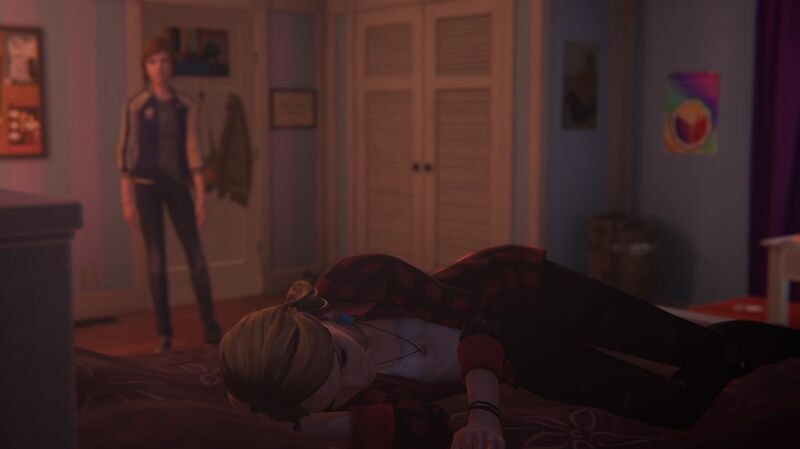 ‘Life Is Strange: Before The Storm Episode 3’ Review: A Gripping Finale

It can’t be easy making a prequel. With everyone from George Lucas to Ridley Scott famously struggling to bridge the gap between old and new, retroactive storytelling is clearly a tall order for even the most accomplished creators. It’s surprising then, that of all people, the team behind PlayStation 1 snowboarding gem Coolboarders  has managed to write one of the most satisfying prequels we’ve experienced in any medium.

Renaming themselves Deck Nine and hiring some of Hollywood’s brightest talent, Before The Storm is a brilliantly written tale. Somehow, this largely unknown studio has pulled off the impossible: it’s given fans an engaging new story that simultaneously enriches the world of the original.

In other words, this nail-biting finale has been well worth the lengthy wait.

Keeping Up With The Ambers

Picking up directly where episode two’s cavernous cliff hanger left off, episode 3 wastes no time in answering your most burning questions. With the mysteries surrounding Rachel’s complex past quickly coming to light, this new chapter once again goes straight for the jugular with its hard-hitting family drama.

Yet, while Before The Storm’s third and final episode could have easily felt like a rushed attempt to tie everything up before the events of the original, impressively, this finale instead delivers a tale that’s refreshingly focused and self-contained.

As you’d expect, this is once again very much Chloe and Rachel’s story. With Deck Nine sensibly saving the segue into the original game for a 2018 epilogue episode, this captivating conclusion focuses on the increasing swath of difficulties faced by the dynamic duo.

Unsurprisingly,  this finale continues to be a tale about what happens when someone comes into your life and completely turns things upside down.

Yet this time, your decisions have the power to change several lives in serious ways. With the stakes raised higher than ever before for Chloe and Rachel, Chloe finds herself risking even more in order to be by Rachel’s side.  Desperate to fill the gaping hole in her life left by the loss of her dad and being abandoned by her friend Max, we now see Chloe putting herself in increasingly dangerous situations.

It’s a testament to how well written this is that everything that happens not only makes perfect sense in the context of the rest of Before The Storm, but also helps to explain why Chloe is so unafraid of taking risks in the original Life Is Strange.

A large reason for that is because everything that happens once again feels refreshingly grounded. Where the original saw everyone’s favourite awkward protagonist Max balancing life’s complexities with her supernatural abilities, Deck Nine has decided that life is already strange enough without adding in mystical powers. Doubling down on universally relatable themes like grief and struggling to find your place in the world, this conclusion serves as a masterclass in how to offer grounded storytelling in video games.

Unlike in many of the choice-based Telltale games, the moral conundrums you face here actually have some pretty serious consequences, with each choice potentially changing the story’s outcome considerably. In fact, we were eventually confronted with a final moral dilemma so difficult, that we found ourselves anxiously fretting for 10 minutes over our decision.

Even more interestingly, thanks to the game’s branching dialogue options, there’s a huge story moment that we didn’t even get to experience. With the game’s final screen once again giving you a glimpse into the choices other players made, we were shocked to discover that some people had managed to trigger an interaction that we assumed was completely impossible.  When it comes to player agency and branching story lines, Mass Effect 3, this is not.

Ultimately, whether Chloe and Rachel become more than just friends is up to you, and somehow, that pretty major decision actually barely scratches the surface of the narrative thread here. Still,  despite that aforementioned final conundrum being a clear highlight for the series, that’s not to say that the rest of the game is light on surprises. As the story ebbs and flows, there’s a comforting mix of the familiar and the foreign. In fact, for the first time in the series, there’s even a conversation that makes you reassess everything you think you know about Chloe and Rachel’s relationship.

The only real disappointment here is that Before The Storm’s brilliant new ‘backtalk’ mechanic is massively underused in this finale. With only one (admittedly tense) encounter making use of Chloe’s signature sassometer, sadly, this intriguing dialogue system is largely swept to the sidelines. While Deck Nine does a pretty admirable job of wrapping up all of this prequel’s loose ends, there are a few other narrative threads that don’t really get a satisfying ending. Otherwise, we can only really say that we wish there was more of Before The Storm to experience.

Is Before The Storm Episode 3 Any Good?

Before The Storm’s final chapter not only helps us finally understand more about the mysterious Rachel Amber, but more importantly, offers enough twists and turns to feel like a story that isn’t constrained by the events of its successor. In fact, aside from one chilling post-credit scene, there’s very little reference to the harrowing future that befalls a certain character in the original.

Just like a good TV show, Before The Storm’s finale leaves you with the feeling that your time’s been well invested. Thanks to characters and conversations you won’t soon forget, a brilliantly emotive soundtrack and some truly heart-wrenching decisions to be made, Deck Nine have continued to raise expectations for storytelling in video games.

It may lack the mechanical variety and elegant sophistication of say, What Remains Of Edith Finch, but despite that, Before The Storm still manages to be one of the finest gaming experiences in undoubtedly one of the medium’s best years.