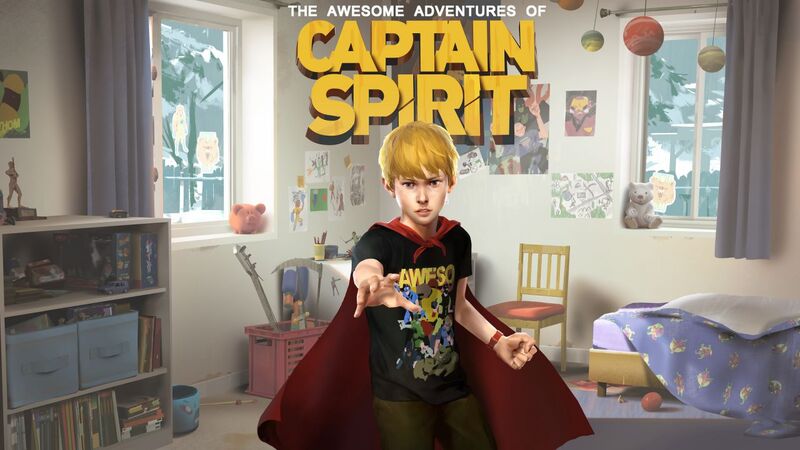 It’s easy to look back on our early years as a time filled with fun and games, isn’t it? Yet, for all the countless hours spent playing and laughing as kids, it’s that awkward transition between childhood and adolescence that we tend to forget.

At the age of nine, you’re old enough to walk, talk and entertain yourself — and so grownups have decided to stop coddling you. But things are still pretty confusing. It’s a time where, while you still love playing with toys, you’re beginning to hear a voice that tells you that you’re too old for them. As the incongruities of adult life begin to seep past that once impenetrable mesh of childhood innocence, a nine-year-old’s world can quickly become a very strange place indeed.

No one seems to know this better than the creators of seminal adventure series, Life Is Strange. After seeing a brief demo of developer Dontnod’s new spinoff, The Awesome Adventures of Captain Spirit, we were instantly reminded just how confusing life can be for a nine-year-old.

After handing over the reigns to Deck Nine Interactive for last year’s brilliant prequel, Before The Storm, original developer Dontnod has finally returned to Arcadia Bay — and this time, it’s taking us back to our childhood.

While we all expected to get our first glimpse of Life Is Strange 2 at E3, the studio surprised gamers with The Awesome Adventures of Captain Spirit instead, an all-new stop-gap release taking place in the Life Is Strange universe.

Put in the shoes of nine-year-old Chris – or Captain Spirit as he prefers to be known – this two-hour free adventure sees players attempting to navigate the harsh realities of the real world by escaping to a fantasy of Chris’s creation.

As our demo begins, it immediately feels like we’re watching a new entry in Pixar’s Toy Story franchise.  Opening with a sweeping panorama of a snow-coated Arcadia Bay, a suitably Life Is Strange twinkly guitar ballad fades out, and the camera takes us into a boy’s bedroom. Playing alone in his brightly coloured room, we find Chris surrounded by a carefully arranged army of toy ships and blank-eyed shiny soldiers.

Grabbing a pointy spaceship lying before him, he pops a little plastic soldier into the pilot’s seat and kicks the engine to life with a furrow of his brow and a low hum from his mouth. With the ship still not managing to make it off the ground, Chris announces that this is a job for Captain Spirit. In a brilliant little fake-out, we see Chris frowning while aiming his hand at the toy ship, attempting to use his ‘powers’ to make the toy levitate.

As Chris continues to hold out his hand and use his ‘powers’, the ship begins to rise…then the camera zooms out, revealing that Chris is actually just swinging the toy through the air with his other hand. Supernatural abilities were a cornerstone of the original Life Is Strange, but were nowhere to be found in prequel Before The Storm.

It turns out that this time around, Dontnod have decided that they don’t need to add in real powers to tell an engaging story — life is already strange enough.

After his awesome display of power, players are given the choice of what badass outfit to give Chris’s superhero persona — Captain Spirit. As he happily scribbles down his awesome heroes designs, you can choose whether Captain Spirit wears a mask, dons a cape, and even how big he is. Before Chris can carry on with his heroic plans though, his dad calls him in for breakfast.

As fans would expect, it’s up to the player how they opt to answer, or whether they just choose to ignore their dad completely. For the first time in the series though, players can also carry on moving about their surroundings while faced with each dialogue option. Eventually Chris bounds along to breakfast, and it’s then that we see the grim realities of adult life clashing with play time.

With Chris’s father seen chugging a beer as he makes your breakfast, a visibly troubled Chris quietly retreats to his fictional world of superheroes.

Following the death of his mother, Chris’s father has turned to alcohol as he struggles to cope with his newfound role of single dad. When given the option to ignore the discarded cans lying around or to ask dad why he’s drinking, our demo sees Chris confront his dad. Seeing Chris’s dad struggle with his grief before regaining composure is a powerful moment, and the look of sadness on Chris’s face hits hard, before his father makes an effort to lighten the mood.

As well as the newfound ability to carry on walking and exploring while you make dialogue options, Chris’s Captain Spirit powers are the other main addition to gameplay. When tasked with fixing the water heater, Chris’s childhood fears transform his dad’s utility room into a swirling and demonic world.

With the noisy heater taking the form of the evil Water Eater — a floating, smoke-like purple monster — this wonderfully wispy (and surprisingly dark-looking) environment really shows off what Dontnod can do with the new tools at their disposal. While Life Is Strange and prequel Before The Storm were made using the (now) slightly decrepit Unreal Engine 3 (or UE3), Captain Spirit looks like a console generation ahead of its precursors.

Thanks to the power ofUE4, character models and environments really pop, with eye-catching lighting bringing this newly colourful and detailed Arcadia Bay to life.

As Chris dares to walk further through this swirling and scary realm, he looks visibly worried. Gulping, he summons up his courage and decides to use his powers to defeat the evil monster. As Chris zaps the creature with bolts of lightning from his fingertips, Captain Spirit’s fantasy world slowly fades away, and our hero finds the courage to reset the scary-sounding water heater.

How’s The Awesome Adventures Of Captain Spirit Shaping Up?

Of all the things we were expecting to be wowed by at E3, the smart money definitely wasn’t on a game where you play a nine-year-old. Yet, we left our demo feeling like we’d witnessed something refreshingly unique.

With players able to choose how Captain Spirit looks, and even able to decide whether to help out Chris’s dad with chores rather than pretending to be a superhero, what we saw of Dontnod’s latest looks like a wonderfully whimsical blend of the fantastical and the touching. For our money, it’s the closest a game’s come so far to capturing the feel of a Pixar movie yet.

While we didn’t see much of it, Captain Spirit also hints that larger environments could well make their way into Life Is Strange 2. The game’s creator Raoul Barbet promises that there will be a mini sandbox world for players to explore in Captain Spirit, with our lonely protagonist Chris able to wander around his snowy garden, transforming suburban Amerian household locations into Chris’s very own fantastical playground.

So far, this free-to-play adventure looks like the perfect thing to tide fans over until Life Is Strange 2. Embodying the charm of movies like Toy Story while packing the kind heartfelt storytelling the series is known for, Captain Spirit looks to once again prove that video games can be compelling without needing to rely on mindless violence.

The Awesome Adventures Of Captain Spirit launches on PS4, PC and Xbox One on June 26th.