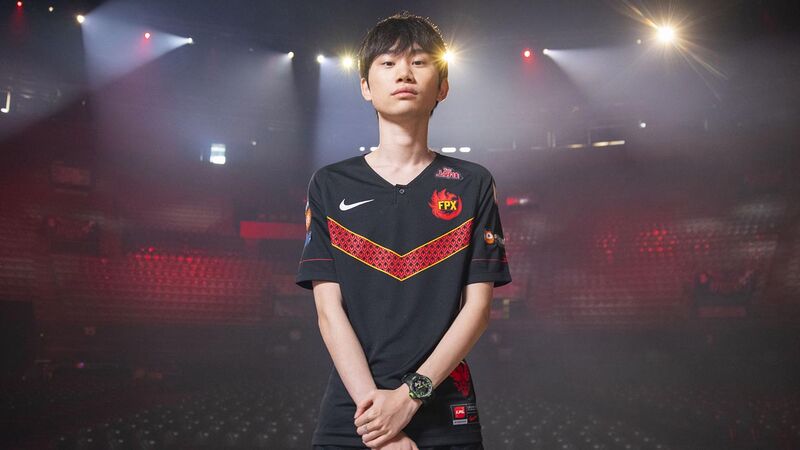 “G2 Were Lucky”: Doinb Taunts Rivals Ahead of ‘League of Legends’ Final

The trash talk jumped out as finalists FunPlus Phoenix and G2 Esports addressed the media during a press conference in the Eiffel Tower prior to the League of Legends World Championship showdown in Paris this Sunday.

The event in the Gustave Eiffel Lounge fanned the flames and offered some revealing answers from the rival teams, prefaced by an introduction from the deputy mayor of Paris who told us “esports is at home in Paris.”

French fashion house Louis Vuitton was also on-hand to reveal its special collaboration with Riot: a travel trophy case for the Summoner’s Cup that G2 or FPX will lift after a hard-fought victory this Sunday.

The hotly anticipated matchup is difficult to call even days before the big game. A calm, confident G2 approach the final with the potential to make LoL esports history. Winning at Worlds would make them the first team to complete a Grand Slam after their victory in the LEC Spring and Summer split and the mid-season invitational. With the home crowd on their side, the remaining question is whether the pressure will overshadow them in the Accorhotels Arena on Sunday. They’re certainly the favourites with the crowd at their back, but that doesn’t mean we should rule out their rivals.

FunPlus Phoenix are the plucky underdogs battling for the ultimate prize at this year’s competition, and their unpredictable style is set to cause G2 a world of trouble if they get their way. Both teams are incredibly versatile, but their ace in the hole is clearly 22-year-old midlane master Doinb (pictured above), who brought the heat by telling the crowd that G2 got through to the final based on luck alone, one of many rousing answers given by the Korean hopeful, who approached the Q&A in a manner as unpredictable as his playstyle.

He quickly followed his comments with another playful jab at G2, who have the crowd on their side in France. ”If they met us in the quarter finals they wouldn’t be able to progress to the semis.”

His endearing candour coupled with a serious confidence in his own abilities as he later quipped “I hope everyone can pay attention in the final as I have been in very good form recently.” How very brave. Doinb rounded off the chat with a word of warning for his competitors… “I’m not sure G2 would dare to let my Kled open in the finals,” referring to his dangerous abilities playing the champion mid. This sent a ripple of gasps through the crowd and some nervous laughter…

FPX’s coach was on hand to turn down the heat a few notches, offering some realistic but hopeful optimism for the final. “I’ve never been to finals so I’m still pretty worried, but I believe if we adjust our form we can beat G2.”

Doinb’s display was a welcome antidote to the stoic showing from G2, who held their cards very close to their chest ahead of this weekend’s matchup. The team talked about how they weren’t focusing on emotions but preparation. Mid-laner Caps sounded confident, saying “It’s the finals now, I haven’t been home yet, and we think we can take the whole thing.”

G2’s coach, Ocelote, made the point that “In a tournament, teams don’t really get better,” so they’re just focusing on their working strategy and plan to bring their A-game against FPX on Sunday.

Asked about the home-court curse, Wunder was quick to dispel the potential for a busy mind. “When I go into the game and just play, I don’t care who the fans are cheering for. I just try and block it all out and play my own game.”

G2’s approach hasn’t changed from previous matches. They know they’re good and this is just another opponent. “The hype is bigger, but we respect them like anybody else,” said Ocelote. G2’s coach believes their main advantage is that “Everything can be played anywhere,” compared to FPX who he believes only have a few players capable of being so versatile. “I have five players who can do anything, so we’re just collecting ideas.”

After some cheeky questions about which champion skins they’d want if they won, the two teams huddled together for a photo and the press conference started to wrap up. Whilst all of the bets are on G2 to take it, it’s hard to deny FunPlus Phoenix and Doinb’s captivating energy, a wave they could ride all the way to the Summoner’s Cup. It’d be quite the upset for G2 on home turf, but an earned victory from the endearing underdogs.

If you’d like to tune in to catch this title fight, you can watch the League of Legends World Championship Final on your streaming service of choice on the 10th of November as the five-match series kicks off following a performance from LOL’s new virtual hip-hop band, True Damage.