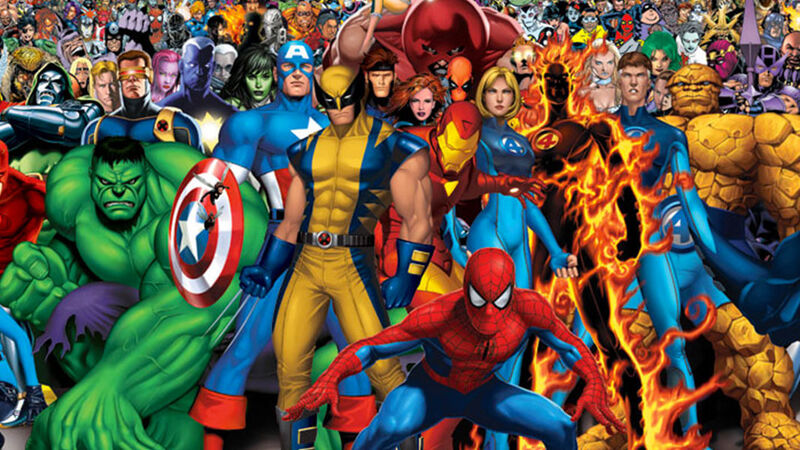 Marvel Comics is a prolific company; with hundreds of character and a lot of comics releasing monthly it’s easy to lose track of characters and plotlines.  This is a guide of who’s who in the Marvel Universe right now, picking up with all the new first issues following the recent Secret Wars event.

Offically referred to as the Unity Squad in-universe, the Uncanny Avengers was a super team set up following the events of Avengers vs. X-Men to try and foster better relations between the humans and mutants of Earth.  Following Secret Wars it has been repurposed to also focus on Inhumans as their presence on Earth has grown of late.  The team includes the depowered Steve Rogers, Deadpool, magic user Doctor Voodoo, Rogue, Quicksilver, The Human Torch, Cable, and the new Inhuman Synapse who has telekinesis among various other abilities.

Just prior to Secret Wars the X-Man/Avenger Sunspot (Robert da Costa) bought out the terrorist group A.I.M. and repurposed it as a force for good.  Now da Costa, retired from the superhero buisiness due to a horrible case of M-pox (a disease caused by exposuere to the Inhumans’ Terrigen Mist) heads up a new team of Avengers consisting of former Young Avengers members Hulkling (a half-Skrull half-Kree hybrid) and Wiccan (a magic user); former Dazzler villain Screaming Mimi and founding member of the Thunderbolts Songbird; Pod, a Norwegian girl with a suit of powerful armor meant to defend Earth from various threats; Victor Alvarez the Power Man (not to be confused with the original alias of Luke Cage) who draws in Chi energy for power; Ava Ayala, the latest wearer of the White Tiger Amulets and avatar of the Tiger god; Clint Barton Hawkeye who is serving as a liason/spy for S.H.I.E.L.D., and Doreen Green the Unbeatable Squirrel Girl.  The group is currently being antagonized by The Maker, an evil version of Reed Richards from the Ultimate Universe.

During the Secret Wars event there was a team of all-female heroes on an island paradise called Arcadia.  During that event a celestial being known as Singularity came to Arcadia and befriended the A-Force.  After the event, Arcadia no longer existed and Singularity was transferred to the 616 Universe where she atttempted to round up her friends She-Hulk, the Inhuman queen Medusa, light-manipulating heroine Dazzler, magician and former Runaway Nico Minoru, and Captain Marvel Carol Danvers who do not recognize her in this universe but help her to defeat a similar being named Antimatter who is out to get her.

Squadron Supreme is the name of a nearly innumerable amount of superhero teams from alternate universes intentionally modeled on DC comics’ The Justice League.   The most recent incarnation of the team are a group of heroes from universes that were destroyed juts prior to Secret Wars.  There’s Hyperion (Superman) who has been serving with The Avengers for a couple of years now, Dr. Spectrum (Green Lantern) a female version of the usually male hero whose world was destroyed by Namor the Sub-Mariner to save the 616 Marvel universe, Blur (Flash) who came from the New Universe, Power Princess (Wonder Woman) who came from the original Squadron Supreme’s universe, and Nighthawk (Batman) who came from the more adult-oriented Supreme Power universe that frequently interacted with the Ultimate Marvel universe.

Not to be confused with the name of the Avengers team from the Ultimate Universe, The Ultimates is a team of heroes in the 616 who have dedicated themselves to dealing with cosmic level threats to Earth and the galaxy.  The team is headed up by Blue Marvel, a black scientist who became a superhuman and was forced to retire by the president in the 1960s when his race was discovered.  Other team members include The Black Panther, Captain Marvel, Spectrum, and America Chavez; a superhuman woman from another dimension who was once a Young Avenger and has adopted the alias of the 1940s super-heroine Miss America.

A while back, Hank McCoy the X-Man known as Beast brought teenage versions of the original five X-Men (Cyclops, Beast, Jean Grey, Angel, and Iceman) to the present in a last-ditch attempt to appeal to Cyclops who had become increasingly more jaded and revolutionary in recent years.  Cyclops is mortified at seeing what he becomes and is attempting to become more aware of who he is so he can be a better leader to the team than his future self, Beast is similarly disturbed by how fast and loose his furry blue future self plays with the laws of nature and hopes to be less reckless in his scientific pursuits, Angel is worried about how detached and inhuman his future self becomes, Iceman has come out as gay influencing his future self to do the same, and Jean Grey having come into realization of what she is later destined to do as the Phoenix and what it helps Cyclops to become breaks up with him and decides to go off on her own to make her own dsetiny.  All of the past X-Men, sans Jean, are members of the All-New X-men along with thermokinetic Idie Okonkwo, Evan Sabahnur the child clone of Apocalypse, new Wolverine Laura Kinney, and the Bamf Pickles.

The Uncanny X-men are a small team of X-Men lead by Magneto who are attempting to find a way to deal with the M-Pox and prevent racially charged attacks against mutants in the wake of Cyclops terrorist actions.  Sabretooth who was inverted to be “good” during the events of Axis and remains that way, Archangel is essentially a mindless weapon who can be controlled by others.  Other members inclue Psylocke, Generation X member M, and mutant healer Triage.

The remaining mutants that are not part of other teams are gathering all remaining mutants in the realm of Limbo.  This team is lead by Storm with the help of Colossus, Magik, Iceman, Nightcrawler, the time-displaced Jean Grey, the time-displaced Old Man Logan, and junior X-men Glob Herman and Anole.  There is also the A.I. Cerebra whose mind is inside of a Sentinel.