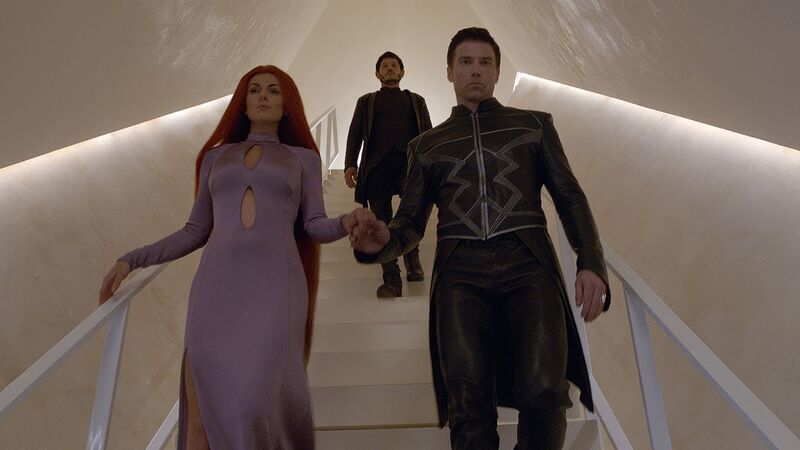 ‘Marvel’s Inhumans’ Review: Funny, But For All the Wrong Reasons

This new eight-part series from Marvel focuses on the Royal Family of a race known as Inhumans. Inhumans are beings with special powers, activated by a mist generated from special Terrigen crystals. They inhabit a secret city known as Attilan. When the Royal Family is betrayed and attacked in an attempted coup, some flee to Earth. With the threat pursuing them to Hawaii, their presence on Earth will likely have far-reaching effects. FANDOM has seen the first two episodes in IMAX and this is our verdict.

The latest series from Marvel arrives with a deafening fanfare: the first two episodes pitch up on IMAX screens for two weeks. Seamlessly stitched together and presented as ‘the first chapter’, it’s a helluva way to introduce the world to the first ever live-action series about Marvel’s Inhuman Royal Family.

It’s just a shame it’s such a massive letdown. That’s perhaps not surprising. There has been dissent from fan quarters ever since we first glimpsed the actors in costume. Then, when the first footage was released, fans grumbled about that too. They picked predominantly on Medusa’s hair which didn’t satisfy the criteria for how they felt it should look or move. For those that don’t know, Medusa’s power is in her hair – she can move it as if it’s a bunch of extra tentacle-like limbs. Get that wrapped around your throat and you’re a goner.

In defence of Inhumans, director/producer Roel Reiné has said that the animation of Medusa’s hair wasn’t quite finished at the time the footage went public.

But though it looks like it could do with a bloody good trim, hair is the least of the series’ problems.

Most closely connected to Agents of SHIELD of all the Marvel Cinematic Universe properties, Inhumans characters first appeared on screen in Season 2 of the long-running series. In Agents of SHIELD, we also saw glimpses of the Teregenesis process which brings out Inhumans’ special abilities. In Inhumans, we’re given a much closer look at how the process works, and what it means for those that go through it.

It’s a tense affair for all involved. When a child comes of age, they’re put through a ritual which sees them step inside a chamber into which Terrigen Mist is pumped. When they emerge, they will hopefully have acquired their latent powers – like one girl who we see acquire the power of flight.

For the king, Black Bolt (Anson Mount), his power turned out to be a supremely destructive voice. One small utterance causes havoc. We see a flashback to him as a child and his difficulties in coming to terms with his ‘gift’. Suffice to say, Black Bolt doesn’t speak anymore.

We’ve already touched on his wife Medusa’s (Serinda Swan) powers. His brother, Maximus (Iwan Rheon), however, was rendered human when he went through the process. Had he not been so well connected, he would ordinarily have been sent to work in the mines like the others who fail to come through Terrigenesis with special abilities. The perks of royal blood. Not sure Maximus quite sees it that way, though.

Ah, Maximus. Signposted as the bad guy right from the start, Iwan Rheon’s Maximus is all pantomime villain. But he’s not the only one relying on melodrama to get him through a ropey script. Anson Mount is also a culprit. And it’s pretty difficult to sympathise with a character who is all moody glowers and glares.

There’s also something comical about Black Bolt’s powers. When he unintentionally demonstrates them, particularly in the flashback sequence, it’s hilarious. And it shouldn’t be.

There are several moments where you wind up laughing, and you’re not meant to. Usually because of a line of poorly written dialogue and its overly dramatic delivery. Conversely, when it’s meant to be funny with a flippant aside, you’re groaning and shifting awkwardly at its corniness.

Good vs Evil Gets Confusing

The best superhero series draw a fine line between good and evil. Protagonists are troubled, while antagonists often have a sympathetic side. Or at least a fully fleshed out character that allows you an understanding of their motives. Think of the Defenders and the varied heroes and villains throughout the individual series. Let’s use Daredevil as an example – Matt Murdock is conflicted, while Kingpin has a likeable side.

But while Inhumans seems to attempt to position some of its characters in this way, it doesn’t ring true. All the characters are underdeveloped and you can’t help but feel this won’t change as the series wears on. As two-dimensional characters, we’re confused when the show introduces messages that contradict their positions as heroes and villains. Is this deliberate? It’s difficult to tell.

When Black Bolt lands in Hawaii, his interactions with humans make him instantly detestable. He is both disgusted and bemused by an overweight man, and he walks off with a suit he hasn’t paid for. He’s new here, but still. His fish-out-of-water moments turn us against him rather than endear us, showing him up for the privileged and entitled dude he is. It doesn’t help that his arrival is reminiscent of General Zod’s in Superman II.

By contrast, a rousing speech given by Maximus at the end will have you baffled as to how you’re meant to feel. If you even care by the time you get to this point.

As for the IMAX experience, it’s kind of wasted. Sure, scenes of Hawaiian landscapes are pretty breathtaking. And some of the overhead shots of the city of Attilan are dizzyingly impressive. But they’re few and far between, and is this what we really want from a comic-book series anyway? Especially if it’s at the expense of other things like script and characterisation.

The show’s main saving grace is Lockjaw. A giant teleporting bulldog, he’s adorable – and is on more than a couple of occasions the source of trouble for the characters, teleporting them into situations it’s challenging to get out of. There’s a touch of old-school innocence about this series that’s somewhat appealing – and we haven’t lost all hope of it improving as the episodes progress.

The series also promises an interesting use of music as it progresses. Moody, if jarring, versions of The Rolling Stones’ “Paint It Black” and The Doors’ “Break On Through” adorn the soundtrack of the first two episodes.

Is Inhumans Any Good?

With its groundbreaking use of IMAX, Inhumans should have been event television. Instead, it plays safe and makes an opening chapter to a series that is largely stripped of personality and flair. In concentrating on making a splash with its IMAX premiere, it refuses to push boundaries in other, more important areas. Sadly, that means a lacklustre beginning to a series that was meant to wow.

The first chapter of Inhumans screens worldwide exclusively in IMAX from September 1, before airing in its entirety on television and other devices soon after.