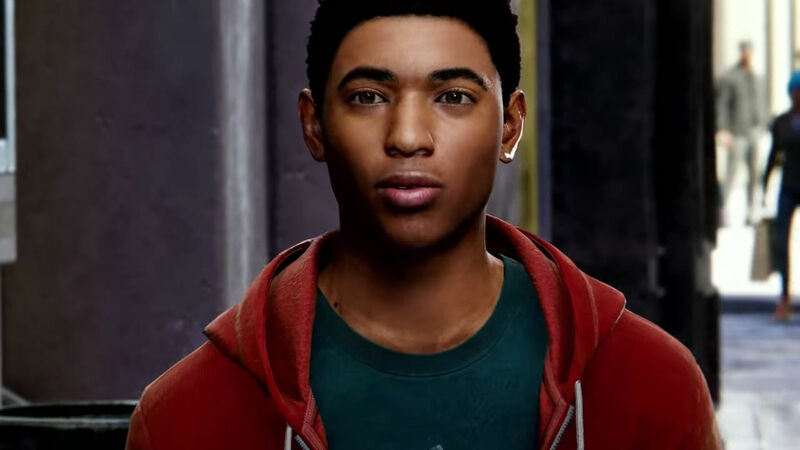 We’re about to enter a huge open world in Marvel’s Spider-Man on PS4, but it’s going to be very different to the Spidey universe we grew up with. Or anything we’ve seen in the movies, for that matter.

There are all-new suits and suit mods, gadgets, and skills, but that’s just the beginning. Whole characters have changed. It’s not even to be considered “the multiverse.” It’s a purely original take.

We especially like this take, too. From what we’ve played, we think Spider-fans will be exceedingly pleased with how villains like Kingpin are treated. The story lead on Spider-Man PS4 happens to believe the most interesting stories happen when the adventures of Spider-Man tangle with the life of Peter Parker.

Seeing that philosophy play out in conjunction with the reimagined elements below will be interesting, and a little dangerous for those invested in Wall-Crawler’s storytelling. But the first few hours we played of the game gave us a lot of faith.

Miles Morales on PS4 is Your Buddy

From universe to universe, Miles Morales is a very different person, and there’s a history of complicated crossovers between him and Peter Parker. One version has Morales as the true successor to Spider-Man, another has him as a criminal companion to Wilson Fisk. When these two versions intertwine, it gets messy.

But the PS4 Spider-Man universe is completely its own thing. Here, Miles Morales is a friend of Parker, offering moral guidance and pushing forward the game’s themes of companionship and teamwork.

He doesn’t have any powers. He’s not Spider-Man. Just a buddy.

The newspaper editor we all love to hate has thrown his hyper-alliterative moniker into the world of talkback radio. Jameson gets angry, takes callers, waxes furious, and generally scolds the masses into his microphone.

It’s actually a perfect fit for the Jameson we know, and little nods are still made to the Jameson of old. The famous headline “Spider-Man: Hero or Menace?” is now a book that Jameson constantly spruiks over the airwaves. You can hear him in the latest trailer, and he’ll be yelling like this into your ear periodically throughout the game:

There was actually a time much later on when Jameson was going to enter radio. After becoming mayor of the city, being given time on the Fact Channel, running a scornful blog dedicated to calling out Spider-Man, then subsequently assisting Spider-Man with information, he finally broke into a radio station to call on citizens to help locate a missing Spider-Man.

The staff on hand saw his potential for incessant yelling into a microphone, and thought he might do alright as a regular.

There you go, kids. That’s how you get a job in media.

Perhaps over the airwaves, it’s a little harder to imagine Jameson yelling “Get me pictures of Spider-Man!” Maybe a recorded sound bite?

What would a Spider-Man story be without Mary Jane? Well, Peter Parker’s been finding out the hard way for the last six months. At the time of starting the game, Peter and MJ have been separated for some time. Things are awkward.

In the PS4 game she’s not an actress, model, or nightclub owner. She’s a reporter for the local news, sneaking into areas that could get her into a lot of trouble for a scoop. It’s all very Lois Lane to us, and it also puts her in prime position to get those coveted Spider-Man shots the local rags will be drooling over.

The PS4 Spider-Man still practices photography, and you’ll get Landmark Tokens for taking nice snaps of city locales. But the Spider-Man of old used to sell snaps of himself to Jameson for money. It’s unclear if he’ll still sell photos in the same way, or if this now falls to MJ.

Peter and Mary Jane did spend long periods of denying their feelings for one another, with Mary Jane being the one to usually pull away. We see early on in Spider-Man PS4 that her investigating lands her in a perilous, unplanned reunion with Spider-Man. So who knows what could happen. Watch this space.

It’s kind of weird. There’s a Venom movie coming out that doesn’t seem to have any mention of Spider-Man in it, and Marvel’s Spider-Man on PS4 doesn’t seem to have any Venom in it. It seems like the perfect crossover, as the two are so intertwined. Peter Parker bonded with the symbiote before Eddie Brock, after all. So we’re thinking (hoping) that the PS4 exclusive is saving Venom for an early DLC or even a sequel.

On top of that, this is a very different Sinister Six than we’ve seen in the past. The members of the Sinister Six are known to change over time, but there hasn’t ever been one with Rhino, Vulture, Electro, Scorpion, and Mr Negative all working together. As for the sixth? We won’t spoil it.

The timelines of these baddies are all squished together. Mr Negative is kind of a newer villain for Spider-Man, but he and other recent characters like Silver Sable are right there next to older staples like Kingpin. It really does read like a list of Insomniac’s favourites wrapped into one cohesive story.

Albeit without Venom, and though we’ve seen Osborn Industries in the game, there hasn’t been any sign of Norman Osborn as the Green Goblin — yet.

There’s a good 24 (give or take) Spidey suits to unlock in this game, and not all of them come from previous versions or alternate universes. Some of them are just straight up new.

That’s especially significant when you consider each suit comes with its own “suit power.” The Noir suit might help out with stealth, for example, while the punk rock suit enables an AoE knockback attack as Spider-Man jams out on his guitar.

The first suit you’ll get through story progression, the Advanced Suit, is actually a Spider-Man PS4 special, intended to be this game’s flagship suit. Later, you’ll be able to mix and match suits and their powers so you can look however you like without restricting your combat style.

This is still one of the aspects of the game we know little about, however. We’ll soon know exactly how many suits are in the game, and the nature of their powers.

The Ghost of Yuriko Watanabe

This one is kind of a “wait and see.” The original Yuri was inspired to become a police officer by her family, and eventually rose to the rank of captain. Spider-Man PS4 uses Yuri as a Commissioner Gordon-like liaison between Spider-Man and the police.

She’s the voice in your ear, giving you news and alerting you to nearby crimes.

Thing is, the original Yuri eventually became the new Wraith. She turned into a vigilante and, for a cop, wasn’t particularly good at covering her tracks.

Will Spider-Man PS4 go down the same road? We’re inclined to believe her role as a guide to the player is too valuable.

This bounty hunter has a complicated history with Spider-Man, though we commonly know her to be teaming up with the Wall-Crawler against villains like Norman Osborn or Countess Karkov.

Silver Sablinova even joins the ranks of amazing women to fall for Spidey, and even comes close to telling him, before he makes it clear MJ is the one for him.

The Silver Sable of Spider-Man PS4, however, has been called in to keep order in New York City and seems to instantly be at odds with Spider-Man. “The next time you get in my way, I will not be so gentle,” she says in the launch trailer.

That’s probably because her company, Silver Sable International, has been hired by one Norman Osborn — who commands her to shoot Spider-Man on sight.

We haven’t played far enough in yet to see where Insomniac is going with this, but it’s setting up to be unlike anything we’ve seen between the two, and Sable’s presentation is instantly new and unique.

We’re staying deliberately vague on this one, because it’s spoileriffic. But in addition to characters being a little different in this PS4 Spider-Man universe, some origin stories have drastically changed.

Some of this will come out in a little bit of exposition here and there, whereas some of it will be glaringly obvious. There are bits of story to dive into if you’re so inclined, such as the snippets of history that come with every Backpack Token you collect.

Help will come from unexpected places. But to reiterate what we said above — we’re very happy with how all of these characters are treated.