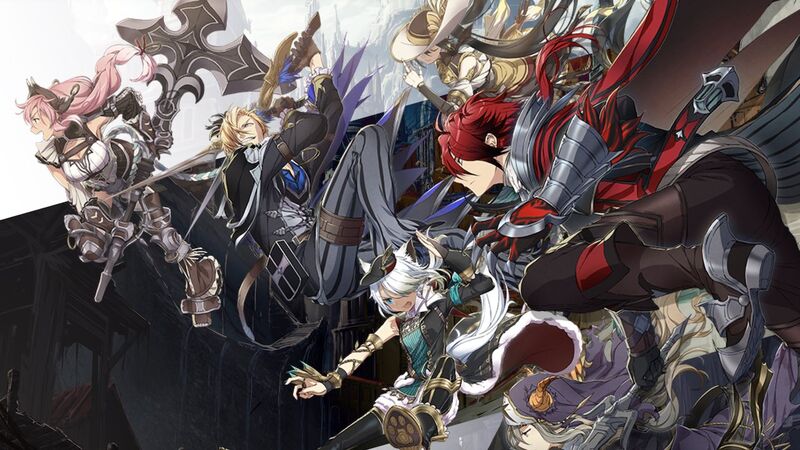 The beautiful fortress city of Balduq is where your tale begins as world-famous adventurer, Adol “The Red” Christin, in Nihon Falcom’s action RPG, Ys IX: Monstrum Nox. But no sooner have you and your companion set foot inside the city walls, you are imprisoned… Sounds unlucky, eh?

Well, your luck soon changes (hopefully for the better!) when you meet a mysterious woman, Aprilis, who bestows upon you the power of Monstrum. With this newly gifted power, you become a supernatural entity with the ability to exorcise and eliminate the monsters that plague the lands.

On your quest, you will encounter other Monstrum allies who will join you in the ultimate battle to close off the void like dimension, the “Grimwald Nox.” You’ll also uncover the mystery which shrouds the Monstrum curse and the hidden story of Balduq.

Here, we take a look at some of the main playable characters that you’ll encounter in Ys IX: Monstrum Nox.

Described as a “dauntless fugitive,” Adol Christin AKA ‘Crimson King’ is the protagonist of Ys IX: Monstrum Nox. Recognizable by his fiery-red hair, Adol is a keen adventurer and is motivated by his will to fight and help those in need.

Crimson Line enables him to warp across the environment at lightening quick speeds, making traveling much quicker. In battle he wields a sword which comes with an array of hack and slash combo moves.

The “charitable thief,” Krysha Pendleton AKA White Cat is a fainthearted and shy girl who was adopted by the Pendleton family as a small child. Her family’s motto may be to ruthlessly take out any competition for their own advantage and capitol gain, but Krysha struggles to come to terms with these actions due to her softer personality—resulting in a complex relationship with her sister, Carla Pendleton.

Described as an “enigmatic beauty,” Anemona Rijndael AKA Doll is a beautiful, doll-like Monstrum and leading craftsman. Her unique powers allow her to see invisible objects that many other Monstrums cannot see.

A double-edged dagger is her choice of weapon.

Third Eye grants her the power to reveal clues and treasures scattered around the explorable environment.

A “charming brawler,” Yufa Gamberg AKA Raging Bull is an energetic waitress who works at the Dandelion bar. She’s dating Felix, though she won’t openly admit their relationship given the teasing that she endures from her siblings.

Valkyrie Hammer allows Yufa to wield an oversized hammer which can be used to unblock obstacles along her route. This is also her weapon of choice in battle and proves deadly with combo attacks.

Known as a “cynical intellect,” Jules Noah AKA The Renegade shies away from public view and was dubbed “Renegade” due to his strange, worn-out vestments. He is a magic-based character, wielding a staff in battle to conjure up spells.

Shadow Dive is another varied way to traverse the environment. It enables him to use his shadowy form to dive underground and find new routes to explore.

Known as a “brash rebel,” Credo Aiblinger AKA The Hawk is a violent Monstrum who loves nothing more than to drink, brawl, and generally look for trouble. Growing up as an orphan in a nearby church, Credo appeared to be the latest prodigy and excelled at academics, arts and athletics—however, he lacked a sense of accomplishment there, and distanced himself from others in the orphanage.

Hunter’s Descent allows him to glide across the environment with his glowing blue wings. He is a dual-wielding character, using short swords as his weapon of choice. These also prove deadly with combo attacks.