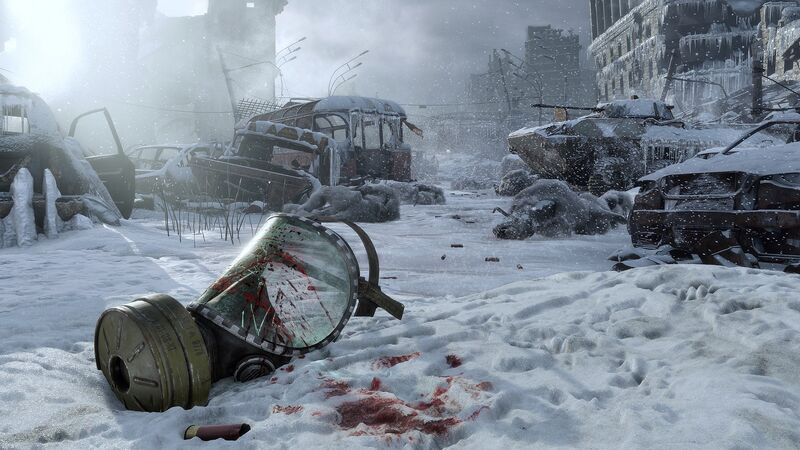 Bringing Lore To Life: How ‘Metro 2033’ Went From Failed Novel to Gaming Classic

It’s a bit of a disconcerting feeling to be playing three previously unseen environments in the forthcoming Metro Exodus, in a venue situated beneath London’s Waterloo Bridge. Sitting in this room decked out like an apocalyptic bunker, we’re painfully aware that we’re just a mile and a half down the road from Westminster, where the UK is making a decision that could leave us in a grim-looking future of our own. But whatever your views on Brexit. For it. Against it. We’re happy to forget it all and just play some video games.

Todays event shows us the vast desert of The Volga. The drained ocean bed of The Caspian. And the awe-inspiring forests of The Taiga. And yet, the event’s biggest attraction is actually Dmitry Glukhovsky, the best-selling author whose books developer 4A games and publisher Deep Silver have been attempting to recreate since the first game in the series, 2010’s Metro 2033.

The eponymous book that formed the jumping off point for that game is now almost fifteen-years-old. Glukhovsky published it for free on his website in 2005 when he was just eighteen. He’s lived in this world – previously one spent in metro tunnels in the wake of the nuclear apocalypse; this time around, stepping into the light and trying to build a new world – longer than anyone. Surely it must feel weird, having his ideas and his vision interpreted by someone else? The writer pauses. Thinks about the question — it must be said, far more intensely than we expected our innocuous opener to be considered — before emitting a small laugh.

“If anything, it’s a relief to share it,” he says, smiling, of the world he created, that has since been reborn in an FPS format over the course of three games. “I came up with the first story when I was seventeen, and next year I’m forty, which is a long time to be living with something as heavy as Metro.”

It turns out, he wasn’t the only one who felt the weight of Metro’s grim universe. “In the beginning, nobody wanted to publish it. I put it online because everyone said no — and at that point I just wanted people to read it. I was putting links on science-fiction forums or websites used by survivalists, trying to entice them to come read the story on my website. Eventually, it did get published but it didn’t even have its own cover. Another book fell through, and the publisher just decided that cover could go on my book. It had hamsters eating meat on it, which was a bit like rats eating people… I guess? But even before that, I’d got an email from the Creative Director at 4A, who’d read the book online, in one sitting, overnight, and decided he wanted to make it into a game. So right from the off I’ve trusted them and known that we shared a vision for what Metro should be.”

Dmitry explains that he and 4A work together every day. “I’m constantly amazed by the level of detail in the games. Especially in Exodus. There are details from the books they’ve captured that honestly amaze me.” But the relationship between Dmitry Glukhovsky and the games studio is absolutely one of collaboration. Dmitry is keen for us to understand that this relationship between creator and creatives is crucial if Metro Exodus is going to the success he believes it should be.

“Do I ever think they’ve got it wrong?” he muses. “No. But my general philosophy is that I don’t think they should ever cut and paste things, and they shouldn’t ever adapt the novels literally. The story of The Shining is a warning in this regard. Stanley Kubrick interpreted the Stephen King book and it’s a work of art. Stephen King didn’t like Kubrick’s version and filmed it himself like he thought it should be, and it was a total disaster. I think talented people should free to interpret things, to challenge things, to rework things. If they don’t input their own soul in it, it’ll show when you’re playing the game.”

Dimitry has been doing this long enough to have worked out what best works for him. Born in Russia’s capital city Moscow in the late 1970s, he wrote his first novel, he says, when he was three, bashed out aggressively on his journalist father’s typewriter on a rare occasion when he’d left his office unattended. “Talk about the suffering of creation? If you missed one of the buttons,” winces the writer, “your finger would slip between them. It’d tear your skin off pulling it free.”

By five he was writing detective stories. By eight he was writing political columns praising Lenin, “because we were all brainwashed in school.” But growing up in a country with a history as complicated as Mother Russia – a nuclear superpower, of course, – meant that eventually, he was always going to end up writing about the apocalypse.

“There’s a great tradition of this kind of writing in Russia,” he says. “There’s the Strugatsky brothers, who wrote Roadside Picnic. There’s another book they wrote called The Doomed City that was a big influence on me too. There’s a big difference between the way Russian writers approach the apocalypse and the way it’s represented in western culture. In the west, it’s basically back to the wild west. No law, anything goes. The Soviet apocalypse is different. There’s more of a sadness to it. There’s a longing that the best is behind you. Fear that everything good that could happen to your civilisation has already happened. I call it Soviet Punk.”

This is all insight we take into our hands-on time with the levels revealed to us today. Dimitry is right. There is sadness woven into the code of the environments we explore. There is a tension between the decaying present and the rusted past. A lot of the game feels quite rough considering how close we are to launch; the conversation mechanic, for example, is all over the place. Too often passers-by frequently bellow inane observations to you while you’re already listening to a mission giver share a salient point. It feels positively archaic after three months or so invested in Red Dead Redemption 2, as so many games are going to feel in the months – maybe years – ahead.

But there’s a segment we played in The Caspian, where we’re asked to retrieve a series of documents from a former Soviet institution that’s been buried deep beneath the sand after the bombs fell. Low on bullets, a torch that stutters and frequently dies, there’re giant spiders down there. There’s a game of cat and arachnid that recalls Alien Isolation with a side-salad of Alan Wake, if you can imagine such a thing. It’s hugely indebted to the best survival horror games. But it’s the details within the office – the notes from workers long incinerated, the family photos on the desks, the stoic notices around the facility – that recall the soul Dimitry talked of earlier.