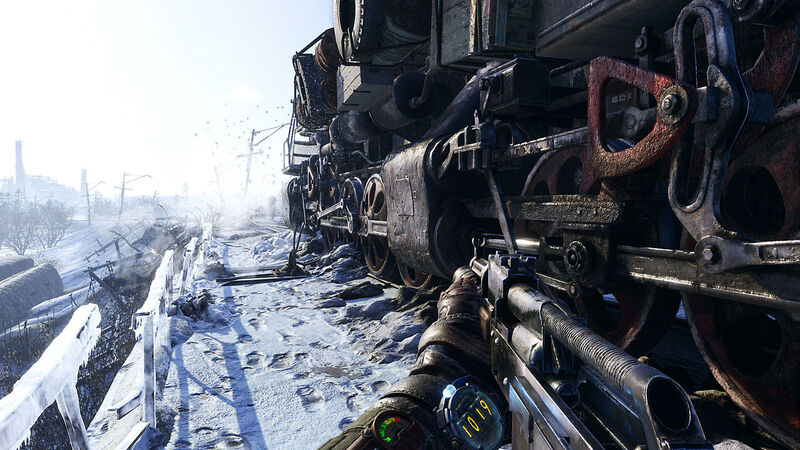 The Metro series has, to date, been something of a sleeper hit. Based on Russian author Dmitry Glukhovsky’s series of post-apocalyptic novels, both the books and the games they inspired explore the ruins of Russia in the wake of global nuclear conflict. With dwindling supplies, obsolete weapons and armour, and under constant attack from the mutated horrors that roam the surface, survivors eke out an existence in the Moscow subway tunnels.

Yet while both 2010’s Metro 2033 and its 2013 sequel Metro: Last Light were well received by players, praised for their blend of tough FPS gameplay and taut horror, they never quite enjoyed the breakthrough success that greets the Fallouts and BioShocks of the world.

Metro Exodus, then, could be the game to bring the franchise to wider attention, and after a recent hands-on session, we think it stands a good chance of doing just that.

Currently, in development by Ukrainian/Maltese studio 4A games, Exodus has clearly retained the keen shooter mechanics and survival influences that made the last two games so compelling, but crucially, 4A drags those systems into an even larger (and deadlier) world. You’re once again playing as Artyom, a young survivor that players first met in 2033. It’s 2036, two years after the events of Last Light, and Artyom is in search of survivors outside of Russia. With rumours of a distant colony in the Far East, he sets off on a continent-spanning journey in hope of finding a new life away from the tunnels.

The scale of the journey is represented in the vast world. The build of the game put together for this demo takes place in a mountainous region where human settlements are in the process of being reclaimed by nature. Diverse and colourful flora builds dense forests and scrubland, while animals skitter around, bringing the setting to life. The elevated view extends miles into the distance, with natural beauty as far as the eye can see. Yet the ruins of small towns scattered about contrast with the ramshackle encampments of post-nuke tribes, showing how this world has been forever changed.

4A clearly wants you to take in and appreciate the splendour of their world too, and have stripped back the UI, accordingly. Rather than an intrusive HUD, indicators for time of day, compass, and Geiger counter are built into a gauntlet on Artyom’s left wrist – a nod to Fallout’s PipBoy devices – and low health is reflected by a red haze at the edges of your vision. Even looking at the map is integrated into the environment, with Artyom pulling out a physical one when you bring it up.

There’s excellent use of sound design too, with the world mostly scored by the sounds of nature but with rising instrumental music as you approach key areas or pivotal moments. It all helps make Exodus feel incredibly grounded and immerses the player even deeper into the world.

The play session opens with Artyom being dragged unconscious from a river by Olga – seemingly a sympathetic character who’ll likely play a larger role in the full game, but who disappears shortly after reviving you here. Despite throwing us straight into a stealthy section, trying to avoid less charitable figures than Olga, it’s hard not to be awed by the scale and beauty of the surroundings. It’s a big change from the cramped, claustrophobic tunnels that players spent so much of the previous two games inhabiting, and the newly-added risk of being attacked from any direction makes you feel even more vulnerable.

Initially armed with only a rickety gun, Artyom soon finds a crossbow and makes his way through an abandoned village. In search of another survivor held by a militia, you’re drawn to their camp but, mistaken for bandits, there’s no hope of peaceful resolution.

There’s a good amount of freedom in how you tackle such roadblocks – initially, I tried to sneak around the militia camp’s outskirts, and with a bit more patience I could have avoided detection entirely. This is often preferable in fact, allowing you eavesdrop on world building conversations and glean important information.

Instead, I was drawn into a tense battle with the opposing group. There’s no ‘storming the fortress’ in Metro– ammo is scarce, and enemies will usually surround you and pick you off. I opted to err on the side of caution, slowly working my way through the camp, picking the bandits from the shadows with crossbow bolts to the head or occasionally sneaking up for melee attacks where I could risk it. Like in the previous games, players always have to weigh up whether its worth using a bullet or shotgun shell to take down a foe, as that gunshot is going to attract a lot of unwelcome attention.

Yet, despite there being moments here that were hard as nails, overall, for this demo build, enemy AI seemed a bit lax. Beyond swarming and trying to overpower me with sheer numbers, there wasn’t much in the way of opposing tactics on show, and several times I managed to stand right next to without being noticed. This definitely needs adjusting before the final release of the game.

Exodus is shaping up to be just as unforgiving as its predecessors though. The world, breathtaking as it may be, is fighting you, demanding considered resource management and posing constant threats. Nothing can be taken for granted – gas mask filters wear out, your torchlight battery runs down and must be hand cranked to recharge, and health kits are a precious rarity. Traps are well-hidden, and in more hazardous locations, mutant dragons may just swoop down and scoop you up. Regular quicksaves are recommended in all cases.

Controls remain complex too, with many of Artyom’s tools requiring second layers of input commands. Four different short-range weapons – grenades, Molotovs, throwing knives, and distraction devices – are brought up with a squeeze of the right shoulder button, while stealth equipment appears with a tap of the left. Still more tools are mapped to the D-pad, all playing a part in surviving. Metro deliberately tries to overwhelm, adding to the tension in combat sections or when traversing dangerous environments.

The biggest change in Exodus over previous games though is the introduction of crafting. Thankfully, 4A Games hasn’t over-complicated the recipes – Artyom may be picking up everything from empty cans to eerily glowing mushrooms, but they all fall into one of two categories: either mechanical scrap or chemical components. You’ll use these to build objects such as new gas mask filters, health boosts, and simple ammo, or to enhance and customise weapons. There wasn’t much cause to experiment with this feature during the hands-on session, with only a few basic items available to craft, but it’s a nice addition that gives you more versatility in how you approach surviving this world’s threats.

Overall, Metro Exodus feels like a significant improvement on its precursors, using its massively expanded scale to deliver a sharper, tougher, and all-around more impressive experience. If the issues with enemy AI are dealt with, this could be when this sleeper hit finally wakes people up.

Metro Exodus launches on PlayStation 4, Xbox One, and PC on 22 February 2019.