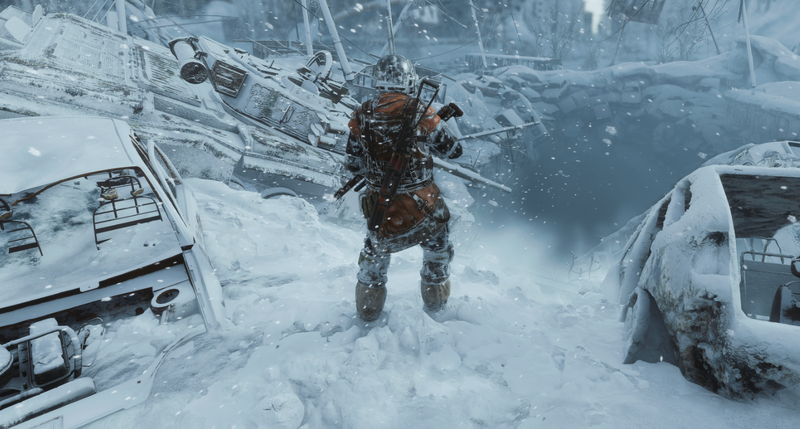 When he was younger, Metro 2033 author Dmitry Glukhovsky spent what seemed like most his childhood travelling across Russia. With extended family living on the other side of this vast country from his parents, making the pilgrimage there and back in the summer months… well, it took its toll on all of them. In a budding young political journalist’s mind, these arduous journeys also cemented certain ideas: about country, about access, about privilege. We can’t say for certain but we imagine it instilled in him not only an admiration of Russia, but a disdain for it. Respect for its sprawling reach but fear of its imposing mass. It’s a theme that we kept coming back to while trudging across the winter wasteland of Metro Exodus.

Why? Because it’s Glukhovsky’s complex relationship with Mother Russia that makes Metro 2033 such a good book. You could argue that it very quickly – and very bluntly – smashes into the awkward core of metropolitan Russian identity in the post-Soviet era. It’s a study fractured societies, of communities dubious about their situation and thrashing against their constraints… but then ultimately accepting their fate and learning to live and love with the hand they’ve been dealt.

Since 2010, gamers have also been following the story of Artyom – an orphan raised and socialised in the dank tunnels of Russia’s ruined Metro. The first two interactive adaptations have been introspective studies of human psychology: contemplations of humanity’s innate warlike state that pose questions about whether we can truly be selfless… or whether we’re simply governed by a primal need to survive.

Now, in the third entry, we see 4A Games and Dmitry Glukhovsky (who has been acting as a narrative consultant on the game) take a step outside of their comfort zones – symbolically and literally. This threequel’s eponymous Exodus refers to the central cast of Spartans – defenders of the tunnels! – being chased out of their home after Artyom and his wife uncover a conspiracy that totally undermines the premise of the previous two games.

Metro was never the only place life could exist.

The revelation shakes the cast to their cores. It calls into question everything they’ve believed, everything they’ve endeavoured to protect. In short order, you’ve requisitioned a train, and you’re barrelling through the decaying Russian wilderness. Welcome to Metro Exodus.

If you’ve played the previous two games, the mechanics are all in place – but tighter. Yes, you’ve gone outside and your sandbox is now a little bigger, but Metro continues to excel at what it’s always excelled at: creating levels for you to scrape through by the skin of your bastard teeth.

There are a few more bells and whistles now, though: weapon customisation is more robust, crafting elements have been introduced as a way for you to manage your resources now bullet-trading is left in the Metro tunnels, and your stealth options are more well-realised. Though you’re given seasonal ‘zones’ to play through, the core narrative absolutely sticks to a beat-by-beat story that makes you visit a set location, and complete it.

This is not a criticism: tight gunplay, impossible resource management, good-but-not-great AI and artisanal level design weave together to create an experience more in tune with System Shock or Dishonored than the more obvious comparisons (Fallout 3, Mad Max). There’s just more personality to things – a more lived-in world.

We truly believe that this miserable, hopeless wasteland has been decaying to itself over the past three games, completely indifferent to our presence. That’s the thing about hopelessness: it’s universal. All four major zones in this game share a common nihilism that just feels so right and so familiar in this myopic political climate.

At one point, faced with a whole nuclear bunker full of rampant cannibals, we asked ourselves: “Are they really in the wrong here, considering what the world has been throwing at them?” The answer, obviously, is yes – these men (yes, all men) are  f***ing monsters and mowing them down Wolfenstein-style with a rusty old minigun feels exactly as satisfying as it should.

But the game’s framing of human motivation vs. human motivation is sublime. Every faction, every deluded cult you interact with (and this includes your own holier-than-thou commander) presents a pretty solid justification for its actions. Exodus doesn’t want to shove political ideology down your throat – it’s smarter than that. If it just, say, had you gratuitously decapitating Nazis for fun (shoutout to Bethesda!), it’d lose its impact and its edge.

Instead, Metro settles on this rhythm that finds its best moments between moments of tenderness and moments of feral brutality. Some of the most peaceful moments in the game, in between the waves sheer dread that climbs up your back every time you enter a new underground level and the lights find a new way to go out, come from the human moments on the train – the luminal downtime between destinations.

We image these domestic vignettes tap into those long journeys Glukhovsky based this game on in the first place – those wholesome interactions between families, those mundane activities that provide the background noise to life.

This halfway-there mentality manifests in the mechanics, too. There are choices in the game: spare people, or kill people. Do you kill the slaves indentured to this cult (easy mode) or do you spare them by offing their captors silently (hard mode)? Do you get your fellow Spartans caught up in the crossfire (easy) or do you take on more of the heavy-lifting to spare them the risk (hard)?

Depending on your choices, you need to own emotionally own your failures. Because if you mess up stealth you’ll kill people, and that’s on you – and the supporting cast of Spartans and civilians in the world will let you know that. The voice acting, granted, is hackneyed (and we genuinely think some of the voice actors didn’t know how they were meant to deliver the lines sometimes), but some moments of character-to-character chatter are so perfectly framed and so well-timed that you can tell they came from a writer with a literate background.

It’s a crying shame that the facial animations look like they’re imported from the 360/PS3 era, because it can really let down the weight of what a character is saying sometimes and impacts on the game’s best feature: its human heart.

At times, Metro Exodus can feel patched together – “we need a shooty section here and another free roam section here” – but when it finds its pacing, it could be held to the same standard as a Naughty Dog or Amy Hennig-penned game. The way Exodus lurches from vignettes exploring familial tenderness to monologues from deranged prophets, from philosophical mumblings to profound statements about the unapologetic brutishness of humanity as a whole… it could be a genre-defining landmark for post-apocalyptic fiction.

Is Metro Exodus any good?

And that was Gluckovsky’s goal when writing this game, and turning his pen to videogames in general. He wanted to engage an audience that, perhaps, wouldn’t engage with Russian political discourse in their day-to-day lives. He wanted to suggest perspectives or viewpoints that may be concealed by other forms of media. He wanted to set a game in a bombed-out capital city and say ‘it’s OK to be political’ (looking at you, Ubisoft).

This tentative conclusion to Artyom’s story achieves that goal, and is probably one of the best book-to-game adaptations we’ve seen because of it. It’s not afraid to have a voice, it’s not afraid to be tough, it’s not afraid to weave some artistic new ideas into a genre that’s been crying out for innovation for a generation. Gameplay-wise, it’s great. Production-wise, it has its issues. But narratively, this is a game composed with soul.

Fluctuating like a Geiger Counter between nihilism and utopianism, this game’s muddy morality is a thing of beauty in the current climate and could be one of 2019’s most important games as a result.