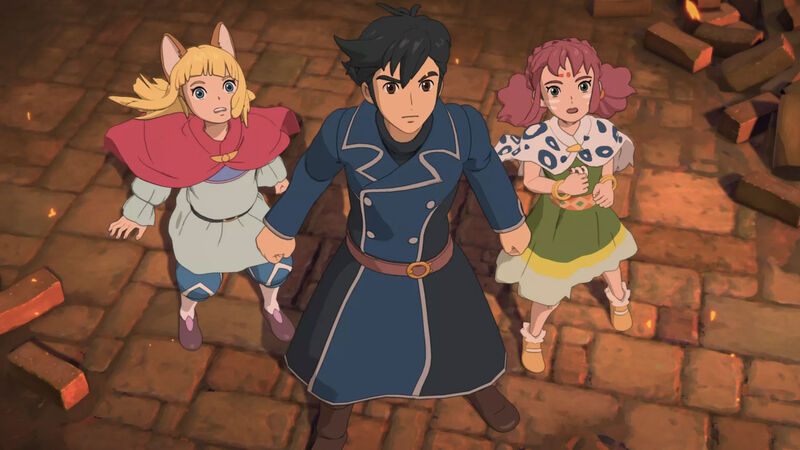 There’s a certain indescribable charm that defines every Ghibli adventure. Whether the studio’s beautifully drawn stories are conveying the horrors of war or just goofing around with giant cuddly bear-cats, it’s their blend of the heart-warming with the fantastical that makes each vastly different creation still feel unmistakably Ghibli.

Yet, despite the beloved studio becoming synonymous with Japanese animation, it wasn’t until 2010 that Ghibli decided to cut its teeth on its first ever video game – Ni No Kuni.

With Ghibli making its name creating some of entertainment’s most charming and unforgettable worlds, seeing them collaborate on a brand new RPG with the developer behind the Dragon Quest series was pretty much every anime fan’s wildest dream.

Unsurprisingly — given the talent of the two companies involved — Ni No Kuni was well received commercially and critically, and fans assumed that its arrival heralded the start of an exciting new Ghibli era of video games.

Yet, sadly for fans, Studio Ghibli’s first ever official video game collaboration was also its last. Shortly after beloved creator Miyazaki announced his retirement, Ghibli followed suit, officially (but temporarily) closing its doors after releasing its 2014 animated swansong, Marnie Was There.

A Ghibli Game In All But Name

Eight years after the release of the original, developer Level-5 is now gearing up to release Ni No Kuni II: Revenant Kingdom. But without Ghibli’s name adorning the box, is this a sequel that’s worth getting excited for?

While you may not see a mention of Ghibli in the credits, it’s time to breathe a sigh of relief – because this stylish sequel is very much still a Ghibli game. Although its recent move away from feature production meant Studio Ghibli wasn’t technically involved with Ni No Kuni II at all, many of the studio’s key animators (including Yoshiyuki Momos, who worked on Spirited Away) jumped ship to Level-5 and have been hard at work on this gorgeous RPG ever since.

This time around, the collaboration between Level-5 and Ghibli has been a far more organic affair — and, boy, does it show. While the last game saw Level-5 basing their gameplay around cutscenes sent to them by Ghibli, Ni No Kuni II’s development has seen the Ghibli alumni overseeing every aspect of its creation.

Here, every environment, every character and even the way the game plays has been guided by the hand of the experienced Ghibli veterans at Level-5.

Where the ambitious original was held back slightly by the aging PS3’s hardware, thanks to the additional horsepower afforded to the artists by the PS4, Level-5 and Ghibli have come startling close to creating a fully playable anime.

With barely a polygon in sight, each wonderfully designed character and environment looks remarkably smooth, as if it has been ripped straight from the sketch artists’ page before being  injected with a welcome sense of depth. Here, everything from fearsome fantasy creatures to friendly townsfolk looks every bit as charming and expressive as anything Ghibli has released on the big screen.

Ni No Kuni II isn’t just a prettier experience than its predecessor, but a deeper one too. After being taken off guard by the overwhelming Western response to the original, Level-5 has attempted to make this sequel even more appealing to players outside of Japan.

For starters, the battle system is a completely different beast to what came before. Ditching the quasi-turn-based, Tales series meets Pokemon combat model from the original, Revenant Kingdom instead gives players full control of an entirely human party. With no familiars in sight, you are free to switch party characters at will, using a mix of melee, ranged and skill-based attacks to make short work of your foes.

Fit For a King

Running at a rock solid 60 frames per second, combat feels just as satisfying as you would expect – if a little simplistic. We’ve only spent a few hours with the game so far, but we hope that as characters level up and unlock new abilities, battles will require more of a considered, tactical approach than the frantic button mashing that helped us coast through the early game.

Yet, the most radical departure from the original No No Kuni comes with the new elements that tie into the ‘Kingdom’ of the game’s namesake. Where the first game saw a young boy called Oliver transported to a strange new world, this sequel instead tells the story of an entirely new young hero. Put in the shoes of Evan Pettiwhisker Tildrum, players find themselves trying to reclaim his kingdom after having his throne usurped.

Yet, this narrative setup is more than just cutscene fodder, it actually ties into everything you do in game. As you travel the land taking on quests and battling monsters, you find yourself actively recruiting new subjects for your Kingdom. Once you’ve earned the respect of your new loyal subjects, you can return to your Kingdom of Evermore, and manage your little town — Clash of Clans-style.

This game mode feels pretty simplistic, merely requiring you to upgrade structures and research new abilities and upgrades by acquiring citizens with the right skills and spending kingpoints.

Revenant Kingdom‘s RTS elements don’t end there though. While most of the battles you engage in will take place in the Tales’ series inspired realtime combat style, between objectives you will have the option to engage in an entirely different type of warfare. Known as skirmishes, these Pikmin-esque encounters see you leading legions of chibi-styled troops into battle. Armed with just basic attacks and four special AOE abilities, the few early skirmishes we got to experience seemed to be lacking in both depth and satisfying combat.

How Is Ni No Kuni II: Revenant Kingdom shaping up?

Still, this is a game that could well span a hundred hours, and with only three hours testing time under our belt — we’ve barely scratched the surface. While Level-5 could easily have just produced a copy and paste sequel, it’s admirable to see the studio attempting to weave so many new mechanics into Revenant Kingdom. Whether this experimentation will pay off remains to be seen, but even if the extraneous RTS elements do end up feeling a bit lacklustre, the core of Ni No Kuni II still looks to be a wonderfully charming Ghibli RPG. And really, that’s all we ever wanted it to be.