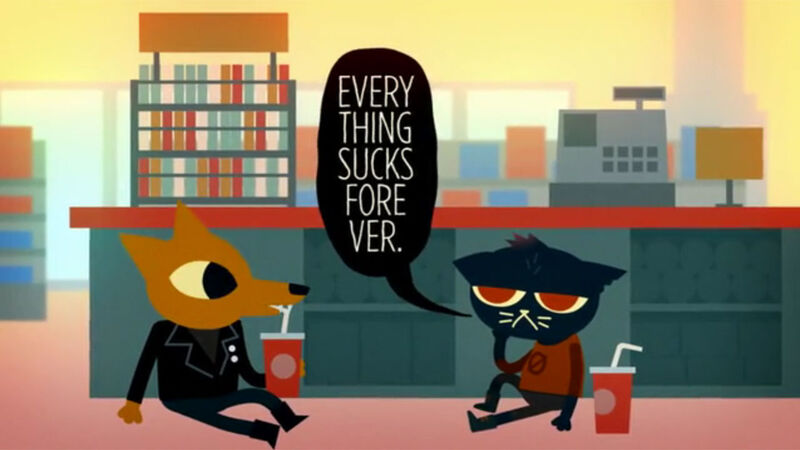 ‘Night In The Woods’ Is Out On Switch Today, And Here’s Why You Need To Play It

Ever since the days of Space Invaders, video games have been a great way of living out your wildest fantasies. Whether it’s by letting players battle skyscraper-sized dragons, blast attacking aliens or score the winning goal in the World cup, there’s pretty much a video game to make any dream a reality. Yet, what if you just want to get by and live a happy life?

Well, that’s where the cathartic Night In The Woods might be able to help.

Despite being a game starring beautifully drawn animals, Night In The Woods actually tells a wonderfully human story. Instead of the kind of frantic platforming you might expect from an indie sidescroller, this charming hand-drawn adventure trades hopping from moving obstacles for navigating depression and attempting to find your place in an ever-changing world. Don’t worry though, it’s actually far more fun than that sounds.

Thanks to some brilliant writing and the game’s eye-catching aesthetic, Night In The Woods is an experience that manages to tackle heavy themes without ever feeling like a drag to play.

Put in the shoes of 20-something college dropout, Mae, you find yourself reluctantly returning to her sleepy hometown of Possum Springs. Why she had to drop out remains a mystery for most of the game, so the story instead focuses on our wise-cracking protagonist as she struggles to adapt to quiet town life. Mae quickly discovers though, that while she’s largely stayed the same since she left for college, everyone in her hometown has grown up and moved on.

From Hilarity To Heartbreak

While there’s a fun murder mystery plot tying everything together, at its core, Night In The Woods is a cleverly written point and click about navigating adult life and dealing with our demons. And if there’s ever a place where you have the time to do some soul-searching, boy, is it in this backwater town. While our protagonist is attempting to grow as a person,  she fittingly finds herself stuck in a place that’s also struggling to integrate with the modern world.

With Possum Springs still dining out on its former glory as a copper mining hub, it soon becomes apparent that Mae’s hometown never really recovered from the closure of its copper mines thirty years earlier. Needless to say, this dreary setting is one that’s ripe for a sarcastic ribbing, and Mae and her friends deliver.

Whether our hero is teasing local hicks, chatting to drunken poets or just outright annoying one of Possum Springs’ many store clerks, a dry sense of humour keeps what could be a heavy tale feeling grounded and fun.

Still, it’s a tone that takes a bit of getting used to. Initially, the smug, Juno-esque dialogue may elicit a few eye-rolls, but stick with it, and you’ll soon fall for its cast of surprisingly relatable characters.

Gameplay wise, Night In The Woods is a mix of quirky mini-games and your standard point and click style meandering. Between stuffing your face at the local pizza joint and jamming with your brilliantly angsty band, you’ll find yourself trapped in some seriously trippy (and sometimes slightly terrifying) dreams.

There’s a cool little overarching story here that obviously we’re not going to spoil, but outside of that, it’s the little things that make the experience, like IM-ing your friends, getting way too drunk at parties, and just generally befriending a town’s worth of people.

Crucially, Night In The Woods isn’t a game that drags either. Thanks to clever pacing and a careful balance of goofy adventures and more harrowing moments, it’s a game that always managed to reel us back in whenever we found our interest starting to wane. It’s also refreshingly accessible too, meaning that you can still play when you’re feeling too tired to be tested — and more crucially —  it means you don’t need to be a seasoned gamer to enjoy Mae’s adventures.

Sometimes, it can be easy to forget that video games are an art form. After hours spent jumping on turtles and blasting aliens in the face, interactive entertainment can seem just like a fun way to blow off steam. That’s why it’s worth celebrating games like Night In The Woods. After decades of enjoying playing things that largely send us on the same kind of experiences, this charming indie game takes players on an unexpectedly emotional journey.

This may not be a game for everyone, but like Hellblade and Life Is Strange before it, Night In The Woods is one of the rarest of things – a video game that isn’t afraid to embrace mental illness and help players through it.  We all struggle with mental health issues to varying degrees, and sometimes, it’s enough just to know that we’re not going through that struggle alone.

Night In The Woods is out now on Switch, PC, PS4 and Xbox One.