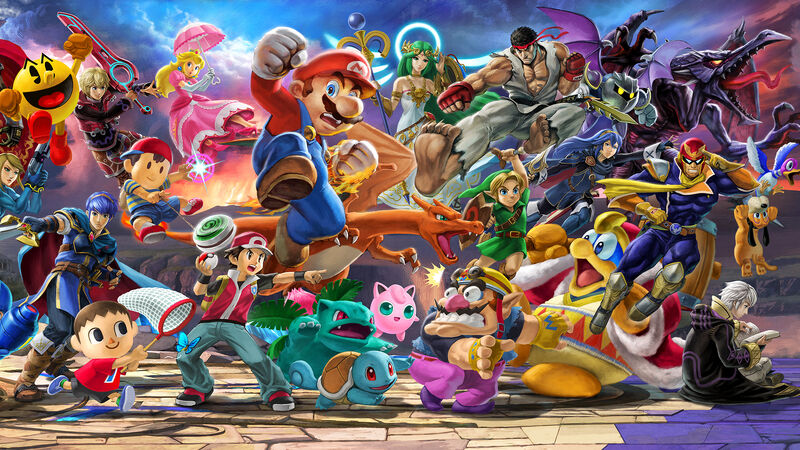 When it comes to first-year game lineups for a console, the Switch’s initial 12 months are pretty hard to beat. While third-party developers may have been umming and erring about the system, Nintendo wasted no time in bringing it’s A game to the hybrid console. With both Breath Of The Wild and Super Mario Odyssey quickly establishing themselves as two of the highest rated games ever made, 2017 was a gleeful time for early Switch adopters. So far though, if we’re being completely honest, 2018 hasn’t been quite as stellar when it comes to Switch games.

Thankfully though, there are still more brilliant games for Switch owners to look forward to over the next four months. Whether it’s remade versions of last gen classics or a handful of brand new exclusives, here are eight great-looking Switch games that are still to come this year.

For many Nintendo fans, this is the only Switch game that matters this year. While Nintendo has undeniably lagged behind the competition when it comes to eSports, its Pikachu-punching franchise is still an immovable tournament mainstay. And in just a few short months, this beloved franchise will finally make its way to Switch.

First things first, we’ve played the game and we’re happy to say that this isn’t just a prettier Wii U port — this is an entirely new Smash. While at first glance it may look very similar to the brilliant 2014 Super Smash Bros for Wii U, the second you get hands-on with Super Smash Brothers Ultimate, it becomes apparent that this is very much its own beast.

For fans of the series,  combat feels noticeable different here, with tweaks to each characters movesets and animations giving the game a rhythm that sits closer to Melee than Brawl.  While newcomer (and long demanded fan favourite) Ridley is a slow-paced character for expert players, Inkling provides a unique gameplay experience that is easy to pick up but difficult to master. Some things never change though, and Ganondorf still feels massively overpowered here. Ah well.

In short, Ultimate is simply one of those Switch games that you won’t want to miss. With two new characters and stages unveiled for the game so far, and the return of beloved fan favourites like Snake and the ancient Saffron City stage, this really looks like it will be the ultimate Super Smash experience.

When it comes to Nintendo handhelds, gamers are usually spoilt for JRPGs. Yet, despite the Switch being a sales smash hit, so far, it’s been sorely lacking on the JRPG front. Aside from the recent releases Octopath Traveller and Nintendo’s own Xenoblade Chronicles 2, lovers of stats-grinding and spikey haired protagonists have been severely underserved on Switch.

Luckily, that’s about to change.

While it’s not an original entry, Namco Bandai’s Tales Of series is no stranger to Nintendo platforms, with the PS2 classic Tales of the Abyss gracing the 3DS. But if Tales fans are being really honest — Vesperia is where the franchise really peaked.

This one time Xbox 360 exclusive combined a wonderfully charming cel-shaded aesthetic with some of the strongest characters in the franchise. With fast-paced yet tactical real-time combat, unexpected story twists and a beautifully realised world to explore, Tales of Vesperia: Definitive Edition is one RPG that Switch owners won’t want to miss.

This unassuming little eShop RTS has slowly become one of our most anticipated Switch releases.

In this intriguing little strategy game, you play the role of the ever-wise general of a small Viking army.

With three different types of units at your disposal — archers, infantry, and pikemen — it’s up to your tiny army to defend an equally small island from boatloads of angry invaders. It’s a pleasingly simple game to control, with players merely pointing and clicking where they want their troops to march to and then leaving the soldiers to do the heavy lifting.

With later levels seeing waves of enemies sail toward your little island from all directions, players can rotate their surroundings thanks to a 360-degree view of the action. The key to success is to place troops strategically, allowing the archers to rain down arrows on foes from above and cover your charging infantry from the impending rush of enemy soldiers.

With upgradable units and buildings to defend, Bad North is simple enough to immediately understand but has enough depth to keep you hooked. One of 2018’s Switch games that is not to be missed.

This time around, Capcom has wisely decided to blend the old with the new. Sticking with the classic 2D side-scrolling that the series is known for, players find themselves navigating a newly cartoon-looking Mega Man across a series of deviously difficult platforming levels.

Yet, it’s his new abilities that have us intrigued. While this could have just been a straight-up nostalgia fest, everyone’s favourite Mega hero now has the ability to power up his weapon – and more importantly, to slow down time. Armed with these new “power gears,” levels now feel open to a whole realm of platforming possibilities.

Combine that with the all-new Time Attack and Balloon Attack modes, as well a slew of (slightly terrifying-looking) bosses, and Mega Man 11 looks like the brilliantly blistering platformer that fans have been yearning for.

We’ve already moaned about the lack of proper RPGs on the platform, but there’s another genre that’s been sorely missed on the Switch so far — party games. While waggle-tastic mini-game collections ruled the roost on both the Wii and Wii U, outside of 1-2 Switch they’ve not been getting a lot of love this generation.

Thankfully then, Mario is about to bring the party back to Nintendo consoles.

While the last few Mario Party games have been more likely to ruin a party than make one, the Switch version looks like a much welcome return to the series’ roots.

Doing away with the annoying car system that dragged down the last few games, Super Mario Party Switch looks to replace the lengthy turns of old with more mayhem. But where things get really interesting is when you bring multiple Switch tablets into the mix. Players will be able to pair off into teams, displaying content on each Switch instead of dividing up the screen for split-screen.

While that’s been done before, in an even cooler touch, players will be able to link multiple Switches together as a single, giant display. Basically, this could be one of the few blessed Switch games that keep all of your drunken relatives thoroughly occupied at Christmas. Wii Sports, who?

While the other platforms got their 4K Dark Souls remasters back in May, for many fans, the idea of portable Souls was the real game changer.  Unfortunately, though, Dark Souls Remastered on Switch got suddenly and inexplicably delayed, smacked with a non-committal “summer” release window.

Well Switch owners, it’s time to breathe a sigh of relief — because it looks like Dark Souls Switch is almost here. Despite months of radio silence from both publisher Bandai Namco and the big N themselves, we managed to get our hands on an undocked version of the game at the recent Nintendo VS event.

And the best part? We’re happy to say that Dark Souls: Remastered on Switch is the real deal. While Dark Souls Switch runs at a locked 30 frames per second rather than the smooth 60 frames of the PS4, PC and Xbox remasters, this is still a highly impressive port – and an improvement over the original.

Featuring the same improved textures and character models as its higher-res counterparts, exploring Dark Souls wonderfully oppressing world on the Switch’s small screen feels even more creepily captivating than it did on the 360. You can read more impressions here.

We’re ready to delve into what will undeniably be one of the most deviously difficult Switch games. Bring on “summer.”

After a year of radio silence, fans finally get their first glimpse at Pokemon on Switch in June. Yet, instead of the brand new adventure we expected ( you’ll have to wait until 2019 for that) Pikachu’s Switch debut will be a remake of Gameboy Colour classic, Yellow. We went hands-on with the game at E3 and game away equal parts excited and wary.

First things first though, Let’s Go! looks incredible. This is the first from the ground up HD Pokémon game, and boy is it a sight to behold. Thanks to some gloriously sharp textures and expressive-looking character models, this shiny HD sheen breathes new life into Kanto’s bright and nostalgic surroundings.

Battles feel just like the anime too. Sending Pikachu onto the battlefield, a grin-inducing little animation sees the world’s most iconic rodent leaping off of the trainer’s arm with a determined look as he gallops towards his opponent.

Unfortunately, though, the game looks like it could be a bit too easy for Poke veterans. With wild Pokemon no longer needing to be weakened in battle before being caught, and players earning XP for every ‘mon they bag, the satisfying grind that many fans love looks to be worryingly absent.

Still, Nintendo hasn’t confirmed what Let’s Go’s difficulty options will be and this problem can be easily fixed with the implementation of a “casual” and “hardcore” mode. Despite a few concerns, this is still likely to be one of the most enjoyable Switch games of 2018 — and we can’t wait to dive back in and fall in love with the original 151 all over again. You can read more here.

The World Ends With You: Final Remix

The World Ends With You, and it looks like this list ends with it, too. Yes, Switch owners — it’s time to get excited because Square Enix is bringing one of its quirkiest JRPGs to Nintendo’s hybrid. Ten years on from its original DS release, the publisher has announced a brand new remaster of the game. As well as featuring a nice new HD facelift, this “Final Mix” edition also brings with it a brand new story-based scenario.

The original saw players battling foes across two screens simultaneously, fighting off enemies with both touch controls and the d-pad. This time around, players can choose between using either the Switch’s touchscreen or the more traditional Joycon controls.

The World Ends With You is still arguably one of Square Enix’s finest releases, and now it could be one of the finest Switch games, too. Thanks to its unique aesthetic, achingly cool soundtrack, and brilliantly addictive combat, it’s great to see this wonderfully refreshing release get a new lease of life on Nintendo’s new console in 2018.